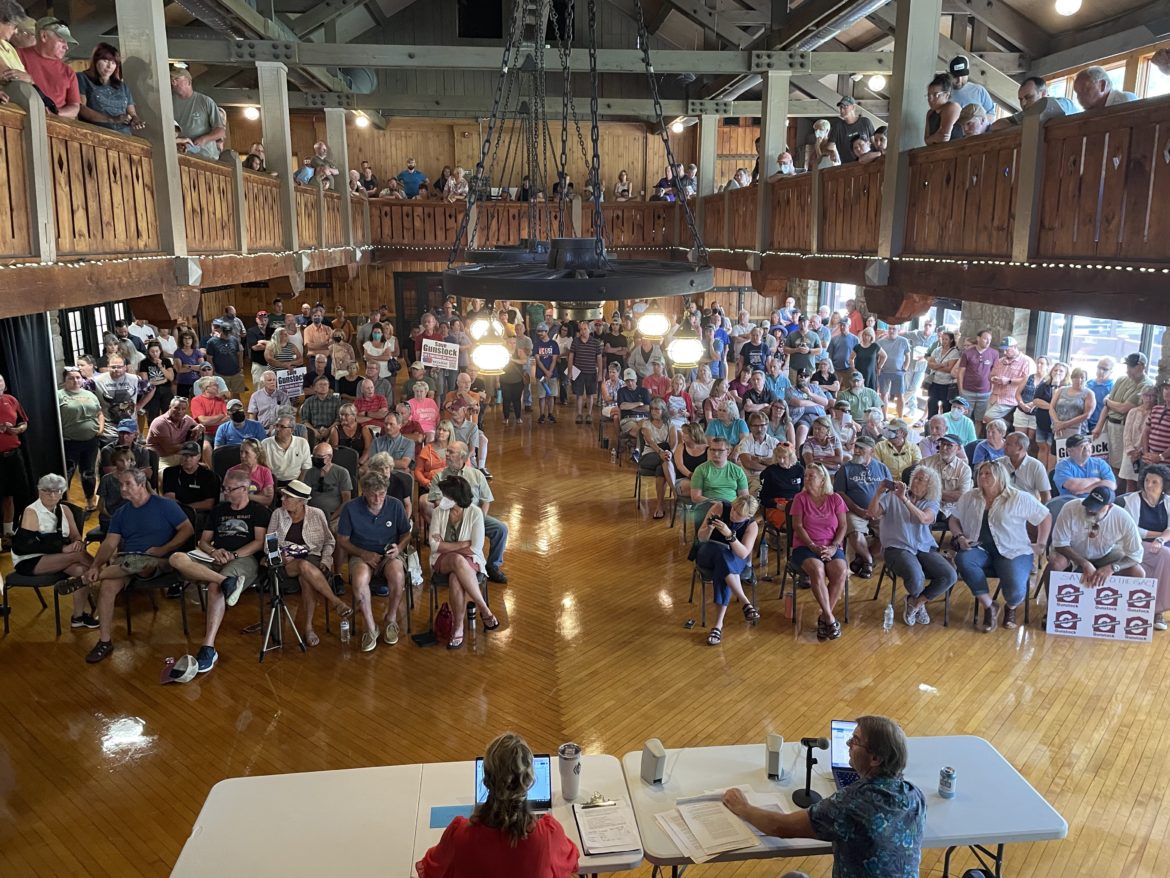 Gunstock's base lodge was packed Sunday for another emergency meeting in an effort to get the county-owned recreational facility re-opened.

GILFORD – The Gunstock Area Commission voted Sunday to return all staff who resigned July 20 at least for the upcoming Soul Fest and members of the Belknap County Delegation said they have the votes to terminate Dr. David Strang as a proviso for their return as early as Monday.

Under calls to resign by legislators, the remaining commissioners and many of the 200 people who attended Sunday’s emergency meeting in Gunstock’s base lodge, Strang said it was his understanding that if he quit there would be only two commissioners and essentially no more commission to do the business of the Belknap County-owned Gunstock Mountain Resort recreation area. Strang attended the meeting via Zoom.

The area closed on July 21 after the mass defection of top staff, including General Manager Tom Day. Critics contend Gunstock was being highjacked by political extremists with Free Staters and libertarians on the 18-member all-Republican Belknap County Delegation.

Doug Lambert, secretary of the Gunstock Area Commission, said the Sunday meeting accomplished three essential things that needed to happen with Strang voting. That was to return the staff to their jobs, at least for the Soul Fest expected to draw more than 6,000 youths for a three-day concert later in the week, and that they were able to call the meeting to order and adjourn.

They also voted to seal the executive session minutes of Friday’s emergency meeting.

Commissioners Lambert and Jade Wood explained that the staff needed to be able to operate zip lines, a mountain coaster, and other recreational amenities as part of the contract with the organizers of Soul Fest or the area could be sued, essentially for breach of contract.

The commissioners also voted to hire a lawyer to represent them before Soul Fest organizers, but they stopped short of approving the payment of a legal fee unrelated to the closure, which Strang urged them to pay or be seen as not fulfilling their fiduciary commitment.

This was met with “boos” from the crowd that packed the base lodge with people encircling the balcony overlooking the meeting as well.

The meeting was also attended by Belknap County state Representatives who as members of the Belknap County Delegation, have the power to replace Strang and select an acting commissioner who will serve for 30 days.

They also have the issue of Commissioner Gary Kiedaisch of Gilford who resigned the same time as Day and the staff but who has said he is willing to return to the office.

Both state Rep. Harry Bean, R-Gilford, and Gregg Hough, R-Laconia, said they have the necessary votes to replace Strang at a meeting as early as Monday and that several candidates are being considered for the temporary commissioner’s seat.

Bean, who said he voted for Strang and considers him a friend, said he is actively asking Strang to resign and said there are more than enough votes in the delegation to oust him if necessary.
Hough, who did not vote for Strang but supported the candidacies of the remaining two of five commissioners besides Strang, said Strang has to go “in order to open Gunstock.”

Lambert and Wood said they believed that there is a clear need to remove Strang as the administrative staff who quit will not come back with Strang on the commission.

The staff also asked for Commission Chairman Peter Ness to resign. Lambert and Wood said Ness did that on Friday during an executive session where he appeared via Zoom with Strang.
Strang left that meeting before it could be adjourned and refused Wood’s and Lambert’s pleas to resign by 5 p.m. Strang admonished Day for not taking his calls this weekend.

Lambert said it is his understanding that Day and his entire staff who defected will not return to the property to work until Strang either resigns or is removed by the delegation.

But he said if that occurs Monday night he sees no reason why the mountain can’t be back in full operation Friday for Soul Fest for its final year at Gunstock.

He noted all it would take to get the mountain’s aerial operations would essentially be a flick of the switch for equipment idled less than two weeks and that could take place mid-week provided Strang was out of office.

Rusty McLear of Meredith, a former member of the Gunstock Area Commission and former hotelier, attended the meeting.

McLear said afterward he was most pleased to see so many people at the meeting and paying close attention to the affairs of the Belknap County-owned asset.

He said he was hopeful that through public pressure, the mountain would be able to return to full operation as soon as possible and noted it was he and fellow commissioner Gary Kiedaisch who recruited Day to the position.

Day worked at Waterville Valley for many years, as did Kiedaisch and McLear knows Day as he was hired to handle opening operations for the Hooksett Welcome Centers. McLear was a part owner with restaurateur Alex Ray.

“It does not need to be rented or sold,” McLear said of Gunstock, though he noted that it needs to grow, thrive and survive.

The ski area cleared a $9 million profit and had a record season last winter.

During his tenure, McLear and other former commissioners floated a master plan that would almost double the terrain, including a slope side hotel and a road to the summit.
He said the mountain needs serious investment in order to continue to be profitable.

McLear noted that the fissures that exist now for Gunstock and what led to its closure started more than a year ago when there were efforts to remove Ness from the board.

During the meeting Sunday, members of the public urged the delegation to make a wise decision going forward on replacements on the board noting that it should not be driven by political ideology but by those who want Gunstock to survive.

Mark Petrozzi, who identified himself as a long-time employee, thanked members of the commission and delegation for deciding to “stand by your oath” while another speaker, a resident of Alton urged the delegation to make wise replacements so that the crisis now underway could be avoided in the future.

An online petition to “save Gunstock” has a petition to reopen the area and remove extremist views from the commission. There are over 2,500 signatures at the site https://sign.moveon.org/petitions/belknap-county-residents-for-gunstock.

The Belknap County Delegation will meet in an emergency session on Monday at 7 p.m. at Gunstock’s main lodge.  The purpose of the meeting is to remove Strang for cause, to make a temporary appointment of a commissioner, to accept the resignations of Commissioners Ness and Kiedaisch and any other urgent business required to reopen the resort, according to an agenda for the meeting, which is open to the public.

The controversy has become political fodder.

That was after Sununu called Sylvia and two other House members from Belknap County “crazy.” Sununu made it clear he generally supports people in the Free State movement who started moving to New Hampshire 20 years ago calling them libertarians who want to reduce government, which he supports.

Dr. Tom Sherman, the Rye Democrat running against Sununu was planning to canvass Sunday in Gilford to “unseat the state reps who shut down Gunstock Mountain Resort.” He blames political extremists for shutting Gunstock down and said Sununu “has courted them for years.”

“We’ve seen these extremists try to defund schools in Croydon, back six-week abortion bans, and undermine our elections,” said Sherman who was scheduled to speak at Gilford Village Field Sunday.