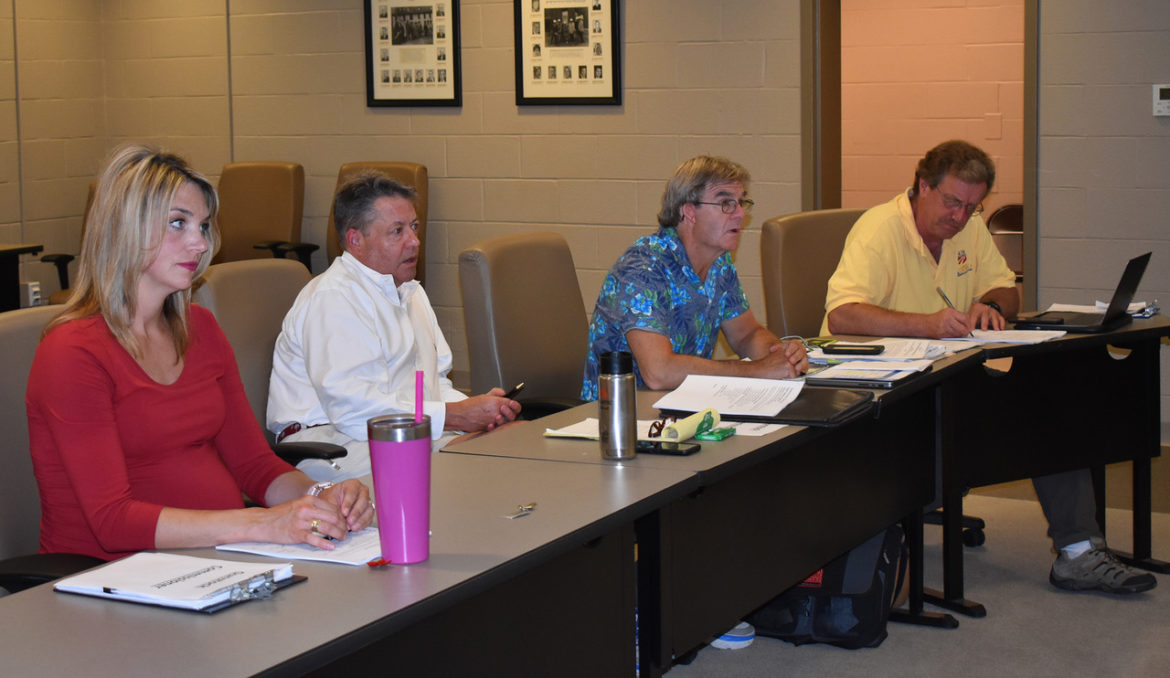 The remaining members of the Gunstock Area Commission react to the resignations of the senior management staff and their own commission member Gary Kiedaisch July 20. From left are Jade Wood, Chair Peter Ness, Doug Lambert and Vice-Chair David Strang. (Tom Caldwell Photo)

The Gunstock Area Commission has accepted the “final report” in a legal review of the genesis of the conflict between the commission and the Belknap County Delegation. The continuing conflict between those parties and Gunstock management this week resulted in the temporary closure of the resort.

Members during a July 1 nonpublic session voted to seek additional legal guidance in examining whether “duties [were] breached and if so, what exposure and liability the Commission incurred by these actions.”

The motion to engage legal counsel in further review of the lawsuit against the Belknap County Convention also included looking into whether any of the actions violated the law; what the commission should do based upon those findings; whether the commissioners had the authority to spend Gunstock money in those legal pursuits; and what steps the commission should take to prevent a recurrence.

The decision to seek a legal review was prompted by Rep. Michael Sylvia’s request for the reimbursement of the delegation’s legal bill in defense against the GAC lawsuit, which he termed frivolous. The request at the time was for $40,000, but legal expenses continued to accrue, eventually reaching more than $50,000.

The delegation had approved spending $20,000 for the legal defense, and the Belknap County Commission has paid that amount, but it delayed further payment in hopes of having the delegation’s “control group” release the emails between Sylvia, Rep. Norm Silber, and the legal counsel they obtained in order to understand why the cost was more than double what had been authorized. The county commissioners will take up the remaining $30,000 balance at their August 1 meeting.

The entire Belknap County Delegation comprises members of the Republican Party. Sylvia, who came to New Hampshire as part of the Free State Project, advocating for smaller government, serves as chair of the delegation, and with Silber serves as the “control group” working with the attorneys at Cleveland, Waters & Bass in the County Convention’s defense. Some members of the delegation have questioned that arrangement and objected when the two men refused to share their emails with the rest of the members.

Gov. Chris Sununu has blamed them and the current commissioners for Gunstock’s problems, writing, “until they are removed from their positions and replaced with good people who recognize the wonderful asset that Gunstock is, the County will continue to suffer.”

Commissioner Gary Kiedaisch resigned his position this week, after the senior management team at Gunstock, including President/General Manager Tom Day, also tendered their resignations amid continuing oversight pressure from the Gunstock Area Commission.

In an April letter requesting reimbursement for the legal expenses from the Gunstock Area Commission, Sylvia wrote, “As we move forward and seek to build a more harmonious relationship among all groups concerned with the viability of Gunstock, I believe it is important to properly memorialise [sic] lessons learned over the past year. What started as a question of the propriety of an ethics policy snowballed into a lawsuit against the county delegation. I believe the suit to have been brought without merit and at great expense to the county taxpayers. As such, I believe it would serve to help restore relations if GAC would look into how this snowball grew, and consider making restitution to the county for the legal expense paid in defense of the suit.”

He added that, had it been a private matter, “there would likely have been a counter claim made for frivolous action. Clearly such action by the delegation would be illogical.”

Gunstock Commission Chair Peter Ness had suggested engaging independent legal counsel to review the record. Kiedaisch agreed that it was important to determine “what caused the snowball to begin with,” as long as it was a full review, going all the way to the beginning of the conflict.

Kiedaisch, along with former commissioners Brian Gallagher and Rusty McLear, had voted to initiate the lawsuit against the county convention to prevent their removal from the Gunstock commission.

The report by Attorney Peter Callaghan of Preti Flaherty Beliveau & Pachios concluded that the Code of Ethics Policy the commission had adopted in 2019 “was not properly promulgated and thus it is of no force or effect.”

“[T]his does not mean that there are no ethical standards applicable to Commission members as there are other state laws defining and prohibiting certain conflicts of interest and improper pecuniary transactions, … But the authority to expand restrictions on Commission members remains with the General Court and not with the Commission,” Callaghan wrote.

The ethics policy is important because Kiedaisch, Gallagher, McLear, and another former commissioner, Russ Dumais, had asked the county delegation to remove Ness, alleging that Ness had used his position as a commissioner to bully Gunstock employees, and that he had attempted to sell his snowsports instruction software program to the county-owned recreation area in violation of that policy.

The county delegation has the role of appointing and recalling Gunstock commissioners, and when it took up the complaints against Ness, Sylvia did not allow any testimony in support of the allegations, saying the original complaint and Ness’ written response denying the charges were sufficient to make a decision. The delegation ruled that there was insufficient evidence to remove Ness from his position.

In reviewing the complaint against Ness, Callaghan stated that he had reviewed the prior counsel’s files, along with new material and an interview with Ness, and “determined that the report’s conclusions of wrongdoing … are unfounded and that there was a concerted plan to remove Commissioner Ness from office following his requests for information, particularly financial information, and his asking questions about the Gunstock operation.”

Callaghan cited a July 19, 2021, note from an unnamed commissioner, stating, “The goal is to present a picture and vote of no confidence to Ness that prompts him to resign.”

The attorney noted, “We determined that it was not necessary to interview other witnesses in order to address the current questions posed by the Commission. However, additional investigation is recommended….”

With regard to Ness’ alleged attempt to sell his company’s Otto software to Gunstock, Callaghan said the record shows that the commissioner had recommended changes to the ski school that included “improving the delivery of the snow sports school services through better trained and better compensated ski instructors, improving the conversion rate of those receiving lessons, and modernizing the use of technology.”

“[T]he report [that Ness had prepared] did not mention the Otto software or advocate for its use at Gunstock,” Callaghan wrote.

The attorney noted that the commission had declined to adopt any of the recommended changes, instead asking then-President/General Manager Tom Day to develop and execute an improvement plan for the snow sports school.

“The only documentation of [abusive behavior toward Gunstock staff] was emails written in 2021 as part of the effort to gather information to build a case against Commissioner Ness and later to push for his removal,” the attorney’s report states.

Callaghan also noted that the commission had not voted to engage legal counsel about a “no confidence” vote to remove Ness from his position, yet invoices indicate that such information was requested in June and July of last year.

Kiedaisch explained in a telephone conversation how the lawsuit against the Belknap County Convention came about. He said that, after Sylvia refused to admit any evidence that would back up the complaints against Ness, and the delegation declined to remove him, Sylvia sent out an email to the entire delegation to set up a meeting to discuss the removal of four Gunstock commissioners.

“The four commissioners that received that had no other recourse than to file a lawsuit to stop him from doing that,” Kiedaisch said.

In his review of the record, Callaghan wrote, “Our preliminary conclusion was that it was an aggressive attempt to significantly delay a removal hearing, control how the hearing would be conducted and preclude certain members of the delegation from participating in a hearing, but it was not well-founded even though it was likely to be dismissed.”

After further review, Callaghan said, “we are unable to conclude that the BCD litigation was patently unreasonable under New Hampshire law.”

Because the lawsuit was not “patently unreasonable,” Callaghan said, “then the reimbursement is not likely to be mandated and any payment would be purely voluntary.”

He acknowledged, “We have not addressed questions about the decisions to file the lawsuit in the name of the Commission or to take other action in connection with that lawsuit and removal proceedings and to utilize Commission funds in pursuit of those matters.”

Minutes of the Gunstock commission’s July 1 nonpublic session indicate that Kiedaisch expressed the opinion that the report was biased and strayed from its original purpose of determining the cause of the lawsuit. He complained that the commission “has now spent eighteen thousand dollars yet failed to address how it started, which he blamed on the Delegation.”

Kiedaisch also said that, during the course of the litigation, they had tried to meet with Sylvia to resolve the matter, but Sylvia had refused.

Vice-Chair David Strang responded, “you had no problem spending over one hundred and ten thousand dollars for supposed ongoing legal matters which were finally stopped by Commissioners Wood, Ness, and myself” when they withdrew the lawsuit, the minutes indicate.

In addition to engaging Callaghan for further investigation into the lawsuit, the commission voted to remove its ethics policy from commission documents and the website “and prohibit its use or that of any similar policy in future years and for future Commissioners.” Kiedaisch and Commissioner Jade Wood voted against the motion.