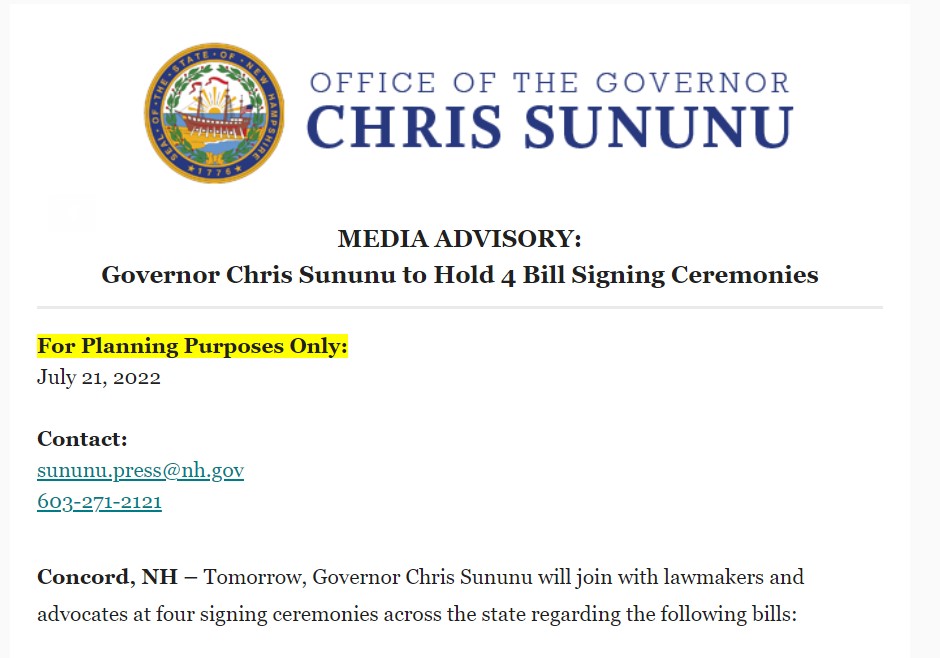 Screen shot of the top of the news release Gov. Chris Sununu's office sent to the media, including InDepthNH.org Thursday.

InDepthNH.org posted where Gov. Chris Sununu will hold bill signings Friday after his office sent out a media advisory at 3:21 p.m. Thursday saying where he will be and which bills he will sign. Sununu’s press office threatened to cut off future advisories to InDepthNH.org for posting it.

Because the bill signings will be at places that are often frequented by the public, I thought the press release was intended to let people know if they wanted to attend so I posted it within about an hour.

The press release from Gov. Sununu’s press office contained the statement “for planning purposes only” at the top highlighted in yellow, which I didn’t take as a mandate. I am not sure I noticed it and was focused on the possibility that people might want to attend as Sununu often sends out photos of himself flanked by supporters signing bills with people who supported the particular legislation and Friday will involve bills he will sign into law in four different communities. See posted press release here:

I have been a reporter for more than three decades and have missed an “embargo” on only one news release during that time that I recall and mistakenly published it early. This was not an embargo. It was an advisory, which we usually don’t post.

I rarely write first-person stories, but believe the governor’s office went too far in threatening to cut off InDepthNH.org from future media advisories from his office for posting information that he wants the press to cover but apparently the public not to know about.

The person from Sununu’s press office who sent the email threatening to cut off InDepthNH.org from future media advisories didn’t respond when I asked for his or her name.

The unsigned email from Sununu’s press office said: “Did you not read the press release? It clearly states at the top that the advisory is for ‘planning purposes only.’ That means it is being sent to help media outlets plan ahead of time and is not for public distribution.
“No other media outlet has had issues abiding by these rules. In the future, you will not receive advisories if you cannot follow these basic, widely accepted practices that no other outlets has issues with.”

I am posting the full press release: