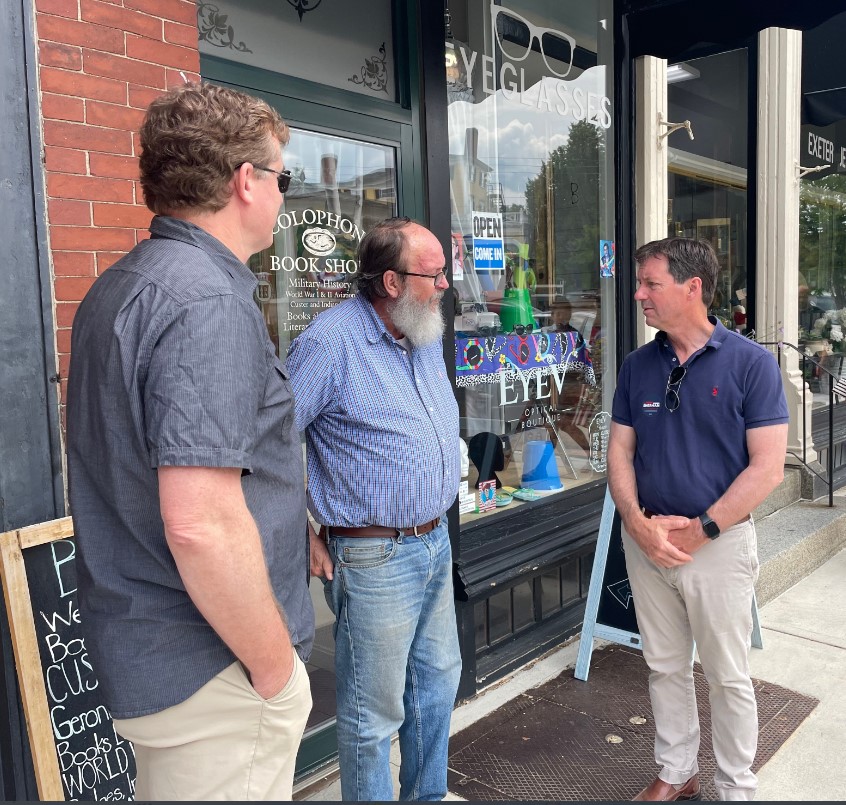 Gubernatorial candidate Dr. Tom Sherman released a housing plan Wednesday that he says will mean serious long-term fixes to the housing crisis, unlike the bandaid one-time approach Gov. Chris Sununu has made in his InvestNH housing plan.

“The housing crisis is having a profound effect whether on renters, businesses, young families, seniors looking to downsize – everyone’s impacted,” said Sherman, a Rye Democrat at a Zoom news conference.

His plan is part of a short-term, intermediate and long-term solution as well as components that can be implemented immediately, Sherman said.

“…To get New Hampshire back on track moving away from what has been the bandaids and temporary fixes of the current administration under Sununu,” Sherman said.

Sherman credited the all-Democratic Congressional Delegation with getting the federal funding that will pay for Sununu’s housing plan.

Sununu’s spokesman Brandon Pratt said the governor’s $100 million plan is historic and already moving forward, and will build thousands of new affordable housing units over the next few years.

“With $50 million to cover actual construction costs, $40 million to cities and towns for zoning, infrastructure, and the demolition of old buildings, plus $10 million to the NH Housing Finance Authority geared toward affordable housing, the governor’s plan provides the comprehensive resources needed to get these much needed units on the market fast,” Pratt said.

The NHGOP was also critical.

“While Tom Sherman peddles hypotheticals, New Hampshire is already moving full steam ahead to implement Governor Sununu’s historic $100 million InvestNH program – a once in a generation investment to increase affordable and workforce housing across New Hampshire.

“Just like Tom Sherman, this forgettable proposal fails to deliver anything of serious merit,” the NHGOP said in an email.

As to the InvestNH plan, Sherman said it has an outdate and at least the largest component is only for shovel-ready programs.

“So while it makes it possible for a few of these shovel-ready programs to move forward it has an outdate, an expiration. We are very late to the game. The governor is the last in the region to propose a program to use these federal funds. That means we have less time to actually do this and implement it,” Sherman said.

The price tag on Sherman’s plan is $35 million for it to be fully implemented which should be no problem with a $400 million state surplus, he said.

“We don’t need new taxes,” he said, adding some investments are revenue generating and sustainable.

The first is to unlock local potential with municipal grants and incentives, Sherman said.

The second is to expand lending and tax credit programs that have shown success and third is investing in the trades, he said.

“We know the workforce has been a huge problem and largely unaddressed in a robust manner,” Sherman said.

“More housing supply is part of the solution for every income bracket, but it is not the entire solution,” Perkins Kwoka said supporting Sherman’s plan. “We need at least 20,000 new housing units in the state of New Hampshire…”

“The goal in housing policy in New Hampshire should be to support our municipalities in building the housing that’s right for them. We are not about at the state level telling municipalities what to do but are here to support them,” she said.

Sherman said, “You can revitalize all you want but if you don’t have places for people to live it’s a little frustrating.”

Sherman said businesses are not looking for one-time investments.

“They are looking down the road. What can they bank on? What can they actually depend on coming from the state? So I’m thrilled there was some initial investment in a one-time manor into the fund.

“What we’re looking for is a longer-term strategic plan, which does not exist,” Sherman said.

His plan will not only make that kind of investment in a fund permanent and ongoing so contractors and people who are developing their businesses around addressing the housing crisis will have funding and resource availability, but also provide the supports the towns need to cut through the red tape to be able to do the projects, Sherman said.

“Part of it is allowing the local communities to make sure they have all the resources they need to be able to move forward as quickly as possible,” he said. Sherman noted that over the past five years, the median gross rent has risen nearly 25%, the median sales price for a home has gone up 83%, and only 0.6% of rental units are now available.

Businesses throughout the state say they’re not able to find workers because their workers can’t find housing, he said.

“We need to build a New Hampshire that matches our values: where our kids can afford to stay, our businesses can find workers, and seniors can retire in the same communities they love. Teachers, police officers, nurses, and firefighters should be able to afford to live in the communities where they work. For our economy to reach its full potential, we need strong communities that have a broad range of housing options,” Sherman said.

It creates a new historical rehabilitation tax credit and expands existing tax credits so that companies investing in growing their communities receive a business tax cut, he said. “And it grows our workforce so that we have the highly trained workers to build the housing stock we need,” he said.

You can read the full plan here.