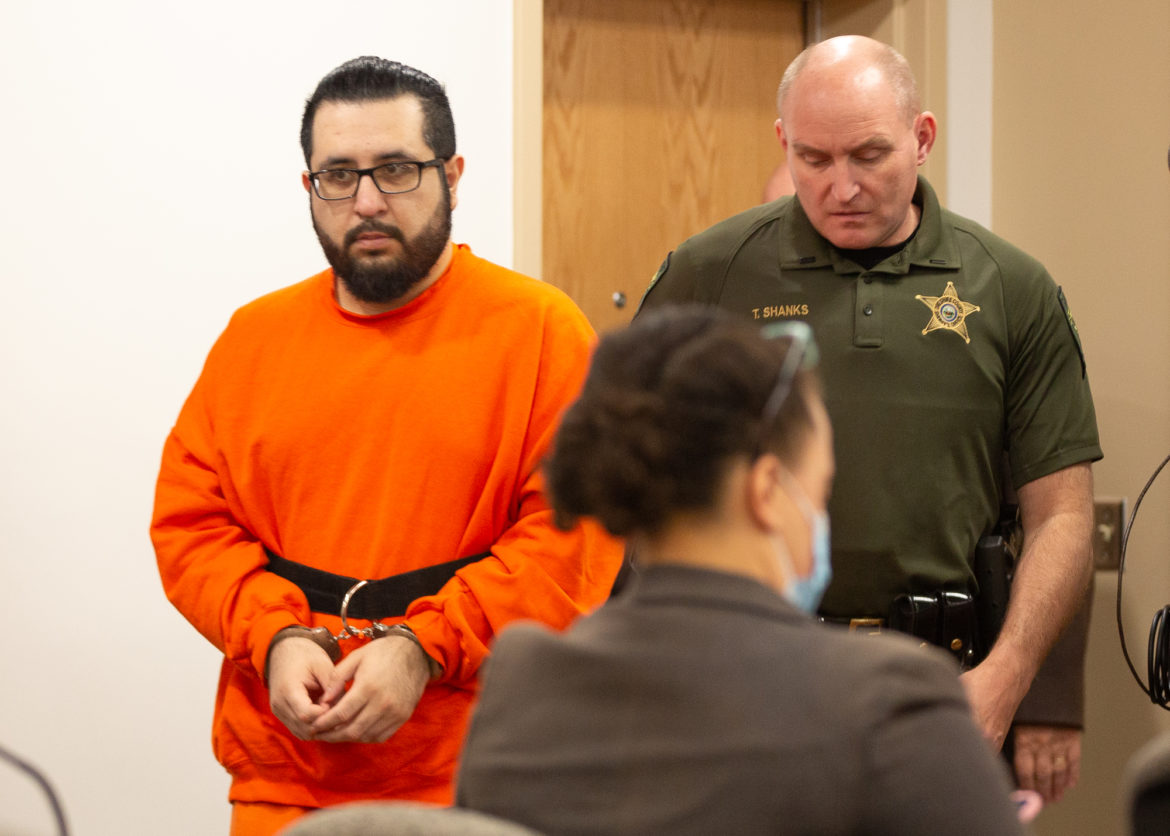 Armando Barron, the Jaffrey man who murdered Keene’s Jonathan Amerault before forcing his wife to cut off the victim’s head, wants his murder condition overturned, partly because he wanted Amerault’s pleas for his life moments before he was killed kept from the jury.

Barron’s attorneys filed a 101-page appeal with the New Hampshire Supreme Court seeking to have his conviction overturned, though the file is redacted, and 83 pages are available for public viewing.

In total, Barron’s team filed 24 separate questions for the Supreme Court justices to consider, including whether the original trial Judge, Cheshire Superior Court Judge Elizabeth Leonard, erred in allowing the jury to hear about Amerault’s pleas for his life.

Armando Barron’s wife, Britany Barron, testified at the May trial that Amerault begged for his life on the night of Sept. 19, 2020. According to court records, she told investigators about the brutal torture of the co-worker with whom she had a budding romance.

“(Amerault) suffered so much before he died. Like, he suffered so much before he died. Like by me, by (Armando Barron) like it was so unnecessarily dragged out,” Britany Barron told investigators. “And he was still begging him, pleading like when he got in the car, like after his neck was being stood on. After his wrists had already been cut, he was still begging him to just stop. He’s like, ‘I won’t tell anybody. I will never see her again, I promise you, just please let me go. Please let me live.’”

Judge Leonard cleared the way for Britany Barron to testify about those pleas.

A week before the murder, Britany Barron told her husband she wanted a divorce. He responded by choking her unconscious in their Jaffrey home and slapping her. Over the following week, Britany Barron began a friendship with the lonely Jonathan Amerault, a co-worker at Teleflex in Jaffrey.

On the night of Sept. 19, Armando Barron found romantic text messages between his wife and Amerault and he flew into a murderous rage.

“You’re going to die tonight, you know that, right,” he told his wife while savagely beating her, and repeatedly shoving the loaded .45 caliber revolver he called “Judge” in her mouth.

According to the testimony and evidence, Armando Barron then hatched a scheme to torture and kill Amerault. He used his wife’s cell phone to send a text luring Amerault to a remote area at the Rindge Annett Wayside Park, and then proceeded to beat and stomp on Amerault after ambushing him with the gun.

During this violent attack, Armando Barron tried to force his wife to kill Amerault. He put the gun in her hand and put his hand over hers, but she refused to pull the trigger. He forced her to step on Amerault’s neck to strangle him. But she stepped off when Amerault’s body jerked. He then forced his wife to cut Amerault’s wrists.

Finally, Armando Barron put Amerault in the back seat of Amerault’s Subaru, and he taunted the man he was about to murder.

“You know, I’m going to let you live,” Armando Barron said, according to Britany Barron’s testimony.

“Wait, I thought you were going to let me live,” Amerault said.

“I guess that makes both of us liars,” Armando Barron said before shooting the gun three times into Amerault, she testified.

Armando Barron then had his wife drive Amerault’s car back their house. They packed both the Subaru and the family Jeep with camping gear and drove hours north to Atkinson Gilmanton Academy Grant in Coos County, all the while Armando Barron had his wife talk to him over their cell phones.

At the remote camping site Armando Barron drove the Subaru into the woods, disabling the vehicle. He and his wife then destroyed evidence, like the contents of Amerault’s wallet. Armando Barron then forced his wife to cut the head off Amerault while he watched.

Armando Barron left the next day and told his wife to have the body buried by Friday, when he would bring their three daughters to say goodbye to her for the last time.

By Tuesday, a group of bear hunters annoyed that Britany Barron was camping near their bear baiting site, called New Hampshire Fish and Game. The conservation officer met with Britany, who had just put Amerault’s body into a nearby creek, and who initially lied about what she was doing there.

It wasn’t until hours later at the Berlin Police Department that she told police what had happened.

Police in Jaffrey had been in contact with Armando Barron after Justine Amerault reported her son missing. Even though Armando Barron agreed to meet with police, he loaded up a pickup truck with concrete and bags of soil, got his oldest daughter, and fled north, prosecutors say. He was arrested near Errol and taken into custody.

Britany Barron pleaded guilty last year to charges she falsified physical evidence for her role in coverup after the murder, including the decapitation. She is no longer imprisoned, though she remains on probation at this time.