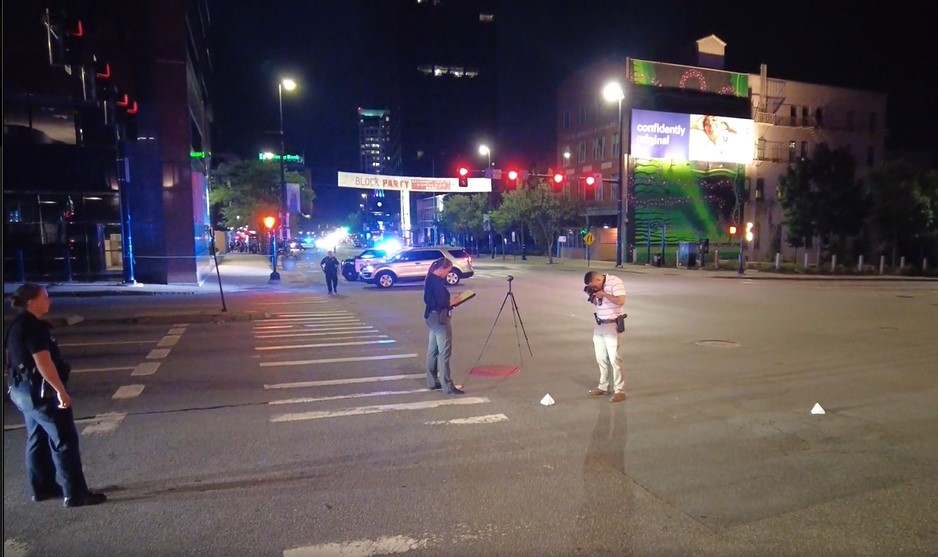 Manchester police are pictured investigating 8:25 p.m. shooting on Elm Street in downtown Manchester Saturday night in which one man was seriously injured.

Manchester Police made a quick arrest in the dangerous non-fatal shooting that occurred in the
area of Elm Street and Bridge Street Saturday evening at 8:25 p.m.

Jean Carlos Medina Correa, a 28-year-old male from Manchester, has been arrested and charged
with First Degree Assault with a Deadly Weapon and Reckless Conduct with a Deadly Weapon
(both felonies) as a result of this investigation.
Medina Correa is alleged to have shot a 25-year-old male from Manchester at about 8:25 p.m. on
Saturday, July 16. According to the affidavit, Medina Correa fired from his vehicle at the
victim’s vehicle, while traveling on the roadway. The victim continues to undergo medical
treatment at a local hospital and is listed in serious, but stable condition.
Medina Correa is scheduled to be arraigned at Hillsborough County Superior Court on Monday,
July 18.

At the time, numerous officers, including dedicated foot patrol officers, were working to disperse a large and unruly crowd in the area of Elm Street and Lowell Street.

Officers were working to break up several fights when gunfire was heard coming from the area of Concord Street. Officers immediately ran toward the sound of the gunfire and encountered numerous individuals fleeing the area.

Responding officers were able to quickly learn that no one was injured and no property had been struck. According to initial reports, an occupant of a red sedan was firing rounds into the air while driving on Concord Street. This vehicle was last seen south on Elm Street.

Manchester Police Detectives are actively investigating both incidents. Anyone with information
is asked to call the Manchester Police Department at 603-668-8711.Information can be anonymously provided to the Manchester CrimeLine. CrimeLine Tips can be provided by:· Calling 603-624-4040 · Logging on to manchestercrimeline.org · Via the secure “Submit a Tip” app. Cash rewards are available for information that leads to an arrest.