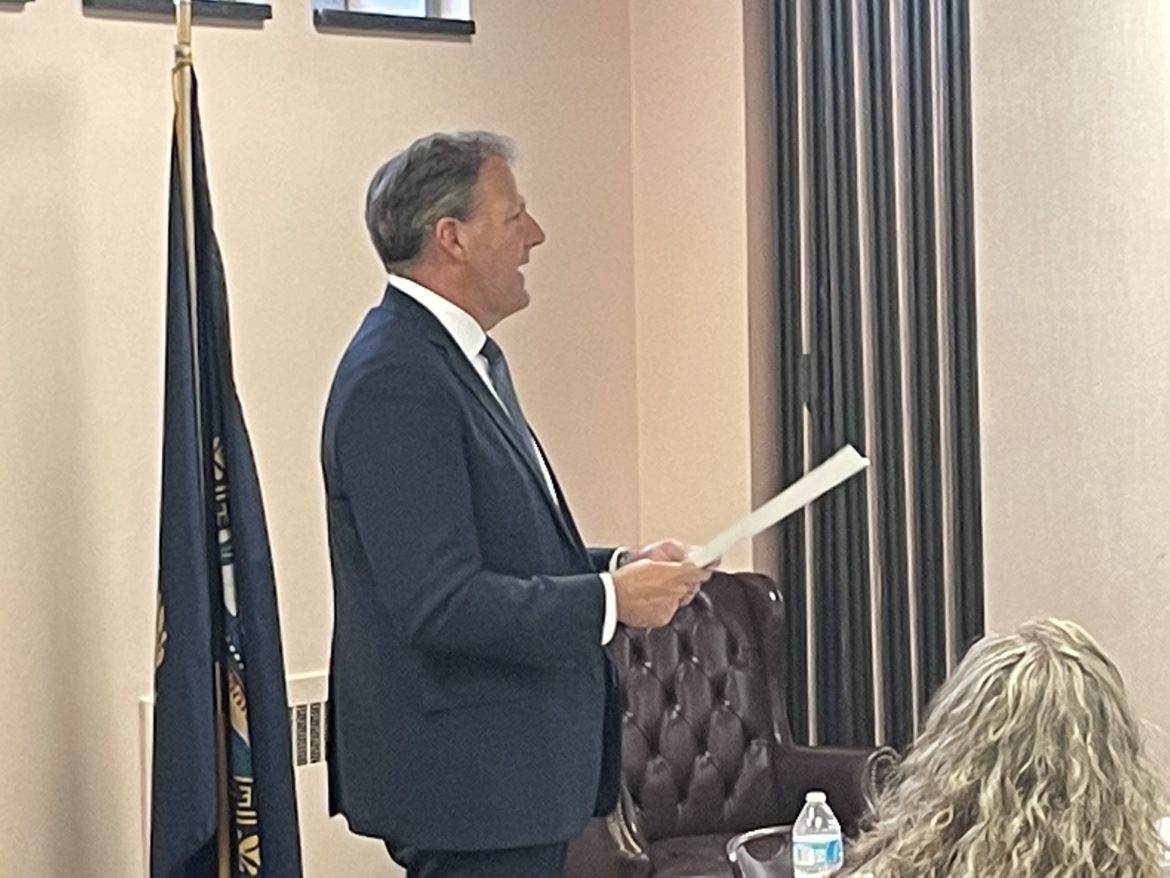 Gov. Chris Sununu is pictured Tuesday at the Hooksett Public Library where the Executive Council met.

HOOKSETT – Gov. Chris Sununu said there are reports in the nation’s south that COVID-19 is seeing an uptick and will likely come here by winter, but the state is in a better position now to respond to it and new variants than ever before.

At a press briefing following the Executive Council meeting Tuesday, Sununu noted improvements are being made to existing vaccines.

“As with every variant, you really don’t know the power of the vaccine versus the variant versus its potential connectivity and contagion ability across the environment of your population,” Sununu said. “We’re looking a lot in other parts of the country right now where you are seeing a surge of cases in the south as you typically do in the summer.

“But we are prepared for whatever might come this coming winter. We really are. We have really done, I think, a very, very good job of knowing that if the Omicron variant comes, if the Delta variant comes if aggressive cases come, if we have a lot of hospitalizations, we are ready for that. We have a lot of PPE (personal protective equipment). I think this state has done a phenomenal job of writing the playbook and being prepared for whatever variables come forth,” Sununu said.

Asked how the state would now know it is having a surge since most people are testing for COVID-19 at home and not reporting to the state, Sununu said the state would rely more on information about hospitalizations as an indicator and the severity they are seeing in their wards.

“It’s still a little unknown what this new variant might mean, but we are going to have a lot more tools in the toolbox,” Sununu said.

Sununu called “horribly insensitive” a tweet by House GOP Leader Jason Osborne suggesting people buy more ammunition for their AK-47 instead of hot dogs for the Fourth of July, hours before a gunman killed seven people at a parade in Illinois.

Sununu also said Attorney General John Formella is looking at a newly passed law related to federal weapons limits and what that might mean for funding programs here.

On July 3 at 10:32 p.m. Osborne, who represents the people of Auburn, Chester and Sandown posted on Twitter that people should go out to buy more ammunition for their high-powered weapons than purchase celebratory hot dogs for the Fourth of July.

It came hours before a man shot and killed people from a rooftop in Highland Park, Ill. watching an Independence Day parade, causing outrage on social media and finger-pointing in New Hampshire politics.

Osborne, who is serving his fourth term in the New Hampshire House and is running for reelection wrote, “Instead of spending $20 more than last year on your Independence Day hot dogs, lay off the calories and grab a few more rounds for your AK-47. You’ll thank yourself later.”

Sununu did not respond to requests for comment immediately after the tweet but said Tuesday, “I speak for 81 governors that came before me that I wish I could tell the legislature what not to say and what to say, for all 424 members of them. But it was a silly Tweet, horribly insensitive and hopefully, people can learn from those types of mistakes.”

Osborne was defensive and defiant after taking heat for the comment.

On Facebook, Osborne posted July 5, “This is America. Last I checked, owning a rifle is a legal, normal, responsible thing to do – not to mention a Constitutionally enumerated right. If you agree, remember to vote in November.”

Rep. Rosemarie Rung, D-Merrimack, tweeted: “This is your daily reminder that this guy is the leader of NH House Republicans and he is on the ballot in November.”

HOUSE BILL 1178 AND THE SAFER COMMUNITIES ACT
Sununu signed House Bill 1178 three weeks ago, prohibiting the state from enforcing any federal statute, regulation, or Presidential Executive Order that restricts or regulates the right of the people to keep and bear arms.
Sununu said at the time of the signing: “New Hampshire has a proud tradition of responsible firearms stewardship, and I’ve long said that I’m not looking to make any changes to our laws.
“This bill will ensure that New Hampshire’s law enforcement efforts will be on our own State firearms laws – and that’s where I believe their focus should be,” Sununu said.
It was signed before President Joe Biden signed the bipartisan Safer Communities Act last week which addresses gun safety.
Sununu said he knows that Attorney General Formella and his office are looking at what programs in New Hampshire may or may not qualify for federal funding due to the new law from HB 1178 but noted the state is still looking for federal guidance or rules around the parameters of the program that will be in place.
Sununu praised outgoing Health and Human Services Commissioner Lori Shibinette for her service to the state and said he wants to know why an alarm went out mistakingly from the Seabrook nuclear power plant Tuesday.

Shibinette, who heads the largest state department, surprised most by announcing she plans to leave her post at the end of 2022.

She did not give a reason for leaving in her letter of resignation.

Sununu said Shibinette has been a “trusted voice” during tough times and said he would look nationally for a successor, noting the shoes would be hard to fill.
“I wish her the best in whatever that next adventure is going to be,” said Sununu following an Executive Council meeting held at the Hooksett Public Library.

Meeting with reporters, he said that Shibinette took the job only a few months before the pandemic and “wrote the playbook” on how to respond to all that COVID-19 threw at the state.

In so doing, he said, she became nationally known, and across the state as a trusted voice.

FALSE ALARM AT SEABROOK
During the Council meeting, the governor asked to take a five-minute break and returned to the Council table to say there had been an inadvertent emergency alert from the Seabrook nuclear power station that mistakenly went out to Seacoast communities.
“I have asked the station to look at exactly why the false alarm did go off. I believe it was part of a weekly test but it was a much bigger alarm than was anticipated. So, therefore, we want to make sure people know there is no reason to be concerned. It was an absolute false alarm and I think the system worked fairly well in a matter of 10 or 15 minutes letting people know,” he said. “We will make sure the plant looks at the ‘hows’ and ‘whys’ of what happened…” Sununu said.