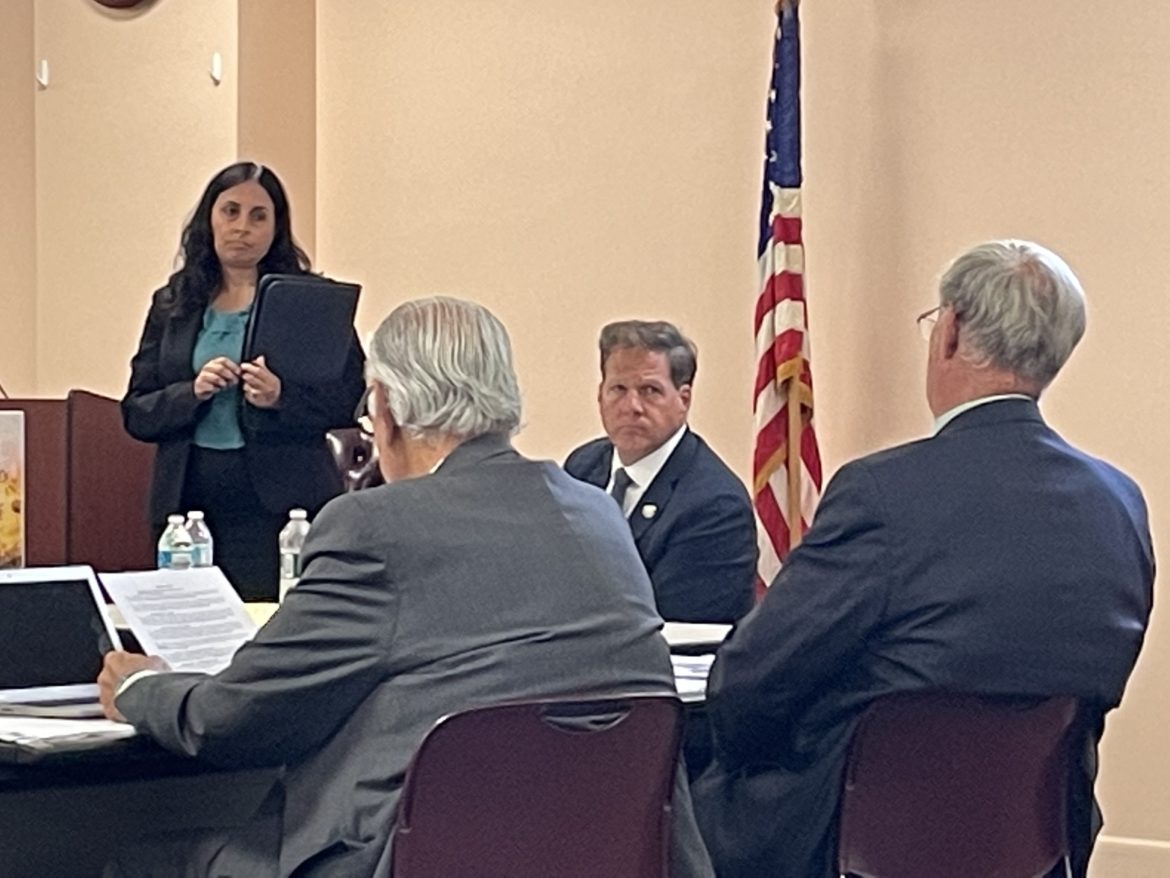 Known for confronting lawmakers over misinformation related to the COVID-19 vaccine, working to solve the state’s mental health boarding crisis, purchasing a new mental health hospital for children in Hampstead, and answering questions of reporters for more than 100 press conferences during the pandemic, Shibinette built a reputation for strength and responsiveness during a particularly turbulent time, Councilors said.

The Council approved her resignation request and thanked her for her service to New Hampshire during the Council’s meeting held at the Hooksett Public Library.

The Council also approved a number of increases to contracts for paving due to inflation, four nominations for new judges, approved a lump sum of almost $140,000 to the Town of Hampstead for payments in lieu of taxes for the state’s new Hampstead Hospital and a contract to study offshore wind, among other matters.

Executive Councilor Janet Stephens, R-Rye, was the first to offer thanks to Shibinette “for stepping up and serving the state” noting she was always at the other end of the phone for her late-night calls, particularly during the height of the pandemic.

Councilor Cinde Warmington, D-Concord, told Shibinette “you have served with confidence and commitment and integrity and courage.”

“Just when we were getting along, too,” said Councilor Ted Gatsas, R-Manchester, who often tangled with Shibinette at the table, particularly over issues related to child health and advocacy.

“You’ve done a good job,” Gatsas said.
Councilor Joe Kenney, R-Wakefield, said Shibinette was particularly helpful at the COVID-19 vaccine sites, noting “a little crisis in the Littleton area and you really came to the rescue.”
“Don’t go away too soon,” he told her.

Shibinette said: “I appreciate the support of the Council. Thank you.”

Gov. Chris Sununu, who picked Shibinette for the post, noted that she is giving the state a number of months before she departs.

“I am hopeful this extended notice gives you ample time to consider a new candidate,” she wrote in her resignation letter dated July 11.

In a press release, Sununu said: “Throughout her tenure, Lori has played a key role in my Administration as New Hampshire’s top health official.

“From the early days of the pandemic to her leadership at New Hampshire Hospital, Lori has earned the respect and trust of New Hampshire’s citizens. I consider her a great friend and wish her all the best in whatever she decides to do next. I cannot thank her enough for her service to N.H.”

Shibinette has been the leader of the state’s largest state department for the past two and a half years.

She graduated with a nursing degree from UNH in 2005 and was chief executive officer of the New Hampshire Hospital before being selected as deputy commissioner of HHS prior to being confirmed to the state’s top health post.

Sununu said parents are “complacent” about the highly addictive and potentially fatal drug Fentanyl. He said as a parent, “it’s a new thing. We have never seen anything like this,” and said the drug is being placed in all sorts of items including vape cartridges and marijuana.

He said the state has a $500,000 advertising contract now underway which is targeting parents and telling them to be aware and to talk with their children about the dangers.

ELECTRIC RELIEF
At the next meeting in two weeks, the Council will be asked to approve a $7.5 million contract to help with electric bills this summer for those who receive LIHEAP heating assistance in the winter months, said Jared Chicoine, commissioner of the Department of Energy.

Also, the legislature will be asked to approve a one-time, $100 credit on electric bills for everyone, as bills are expected to skyrocket this fall due to increased costs of natural gas used to produce electricity.

The Council discussed how to best get the money out and Kenney suggested there be a mechanism in electric bills to allow some to donate their $100 to those in need.

Sununu said the focus is on expediting relief and planning for what could be a very expensive heating winter for many.

“INADVERTENT” SEABROOK ALARM
The Council meeting was recessed when the governor was made aware of an alarm at Seabrook nuclear power station which was not a regular test drill.
He said the alarm was “inadvertent.”

FOUR NEW JUDGES CONFIRMED
The Council approved three new judges for the Circuit Court system and one to the Superior Court.
Approved to the Circuit Court following public hearings were Sandra Cabrera of Columbia, Justin Hersh of Goshen, and Joseph Tessier of Milford.

Approved as justice to the Superior Court was Lisa M. French of Weare.

OFFSHORE WIND
The Council approved a $249,750 contract with Normandeau Associates to assess and report the potential environmental, economic, and energy impacts in NH of Offshore Wind projects in the Gulf of Maine.

AUG. 9 DEADLINE FOR LACONIA PROPERTY PROPOSALS
Sununu said he would like to be the auctioneer at a live auction for the former Laconia State School, in part in jest, but deadlines for requests for proposals for the tract are set for Aug. 9. Charlie Arlinghaus, commissioner of the Department of Administrative Services, said he was “fairly optimistic” there would be a buyer.