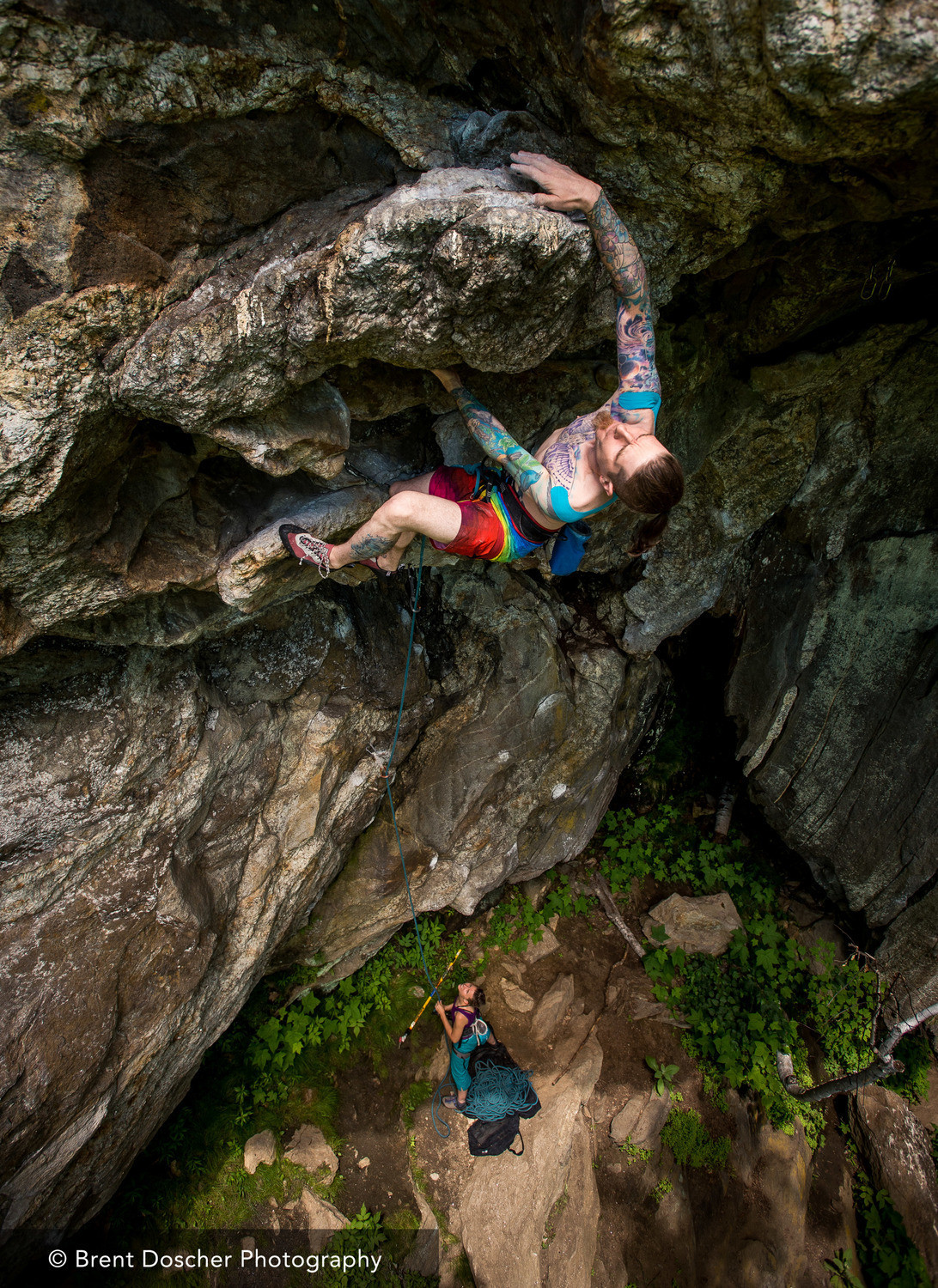 By WAYNE D. KING, The View From Rattlesnake Mountain

Imagine yourself 150 feet above the valley floor hanging from a rope. Below you the winding path of the Baker River meanders through the quaint town of Rumney, N.H.

Above you the sounds of Hawks and Peregrine Falcons pierce the quiet. Your muscles ache with the exertion of the climb but the adrenaline rushing through your body and the sights, sounds and smells of this place make you feel more alive than you have ever felt before.

If you know, or can imagine, this feeling, you understand why hundreds, sometimes thousands, of people make the drive to the cliffs of Rattlesnake Mountain in Rumney every weekend.

Lee Hansche, who wrote a digital guidebook called Gunks Apps – Rumney with a couple of other authors and who has climbed all over the world, also sits on the board of Rumney Climbers Association.

“It’s where I’ve done 70 percent of my climbing over the last 25 years,” Hansche said.

It’s a favorite spot and one he knows well to be called mayor by fellow climbers.

“There are over 700 sport climbs from beginner to world class difficulties and it is known for being well equipped and convenient,” Hansche said.

What began in the 1960’s as a few hardy souls playing among the hawks on the cliffs of Rattlesnake Mountain in Rumney, has evolved into one of New Hampshire’s most popular natural attractions.

Today, avid climbers head for the cliffs of Rattlesnake in droves for climbing that is easily accessed and among the best in the Northeastern U.S.

Just 40 minutes north of Concord, N.H. and only a 2-hour drive from Boston, the cliffs of Rattlesnake Mountain are an easy drive for climbers of all abilities and gradually the support infrastructure is growing up to support the growth of this popular pastime.

The Wendall Ascent Begins an Era

The first recorded climbs on the cliffs of Rattlesnake Mountain appear to have been made in the 1960’s by the father and son team of George Wendall II and III for whom a route is named on the main cliff of the mountain.

In the 1970’s more climbers began to explore and document routes and in 1987 writer Ed Webster first included Rattlesnake among the climbs in his “Rock Climbs in the White Mountains of New Hampshire.”

Webster’s book brought increased interest in the area but also created new tensions between climbers and private landowners who controlled some of the land adjacent to the National Forest where many of the climbs were located.

In the early 1990’s these tensions reached a high watermark when the landowner, concerned with liability issues and a dramatic increase in use, posted the land, prompting a dramatic decline in use. This event was the genesis of a new organization . . . the Rumney Climbers Association.

The RCA was committed to taking action to see that Rattlesnake remained open to climbers.

What followed was one of the great examples of proactive cooperation between the National Forest and the climbing community as climbers and environmentalists joined together to purchase the land in question and add it to the National Forest holdings. Once again climbers returned to Rattlesnake to rediscover their favorite routes and the National Forest got on board with parking to accommodate the new crowds and ease the concerns of local folks on their weekly “dump runs” to the Rumney transfer station – located along the same road.

The rock climbing community has shown remarkable persistence in dealing with the challenges of the growing interest in Rattlesnake and the challenges have not only been between people. Rattlesnake Mountain is also the home to the threatened Peregrine Falcon – only removed from the endangered species list in 1999.

Working in cooperation with the New Hampshire Audubon society and others interested in protecting the nesting falcons, various sections of the mountain are closed off during the breeding seasons to sustain this remarkable comeback from near extinction.

In 2002 the first guidebook to climbing Rattlesnake was produced. “Rumney,” by Ward Smith details more than 400 routes up the cliffs ranging from easy to very difficult was first released. It is considered the definitive guide for climbing and bouldering in the area.

For those not inclined to rock climb, Rattlesnake Mountain has a very easily attained and interesting summit with views all along the Baker River Valley. Parking is 2 miles farther along the road from the National Forest Service Parking lot.

Rattlesnake’s Trailhead is off the Buffalo Road in Rumney. While you are in Rumney you might also want to take a drive, or bike, along the Stinson Lake Road over through Ellsworth and Campton; or take Halls Brook Road to the town of Groton. Directly across from the Buffalo Road in Rumney is the scenic Quincy Road. The Quincy Road leads past Longview Farm, one of New Hampshire’s most successful working farms (the best corn in America in my book) and over the restored Smith Millenium Covered Bridge reputed to be the strongest covered bridge in the world. Backtrack from the covered bridge just 1/4 mile and follow the Fairgrounds Road into Plymouth.

U.S. Supreme Court Justice Nathan Clifford was born in the shadow of Rattlesnake Mountain. His birthplace is located about 200 yards before the Rattlesnake trailhead going north. It is denoted by a stone with a plaque. Nathan Clifford, by today’s standards, had a very checkered but illustrious career, going from country lawyer to state representative and Speaker of the Maine House of Representatives. He was then elected to Congress and later appointed to the U.S. Supreme Court in the period following the Civil War. During his time on the Supreme Court Clifford was appointed to the special commission to determine the outcome of the disputed Presidential Election between Samael Tilden and Rutherford B. Hayes. The record is very foggy but there is a developing agreement between many historians that Clifford cut a deal that put Hayes in office and ultimately ended reconstruction in the South, thus putting off a reckoning with civil rights that would haunt the country for another hundred years.

Rattlesnake Mountain parking lies along the Buffalo Road in Rumney. Take Exit 26 of I-93 and follow the Tenney Mountain Highway to the Plymouth Rotary. Bear right on Rte 25 to the second blinking light (Main Street a.k.a. Stinson Lake Rd.) Follow Main Street approximately 1/2 mile to the junction with Buffalo Road (left). Bear left onto Buffalo Road and follow the road approximately 2.5 miles where you will see the trailhead sign. If you are going to climb, there is a parking area .9 of a mile along the Buffalo Road.

Note: There are several mountains in New Hampshire named Rattlesnake. Be sure you don’t get the wrong one!