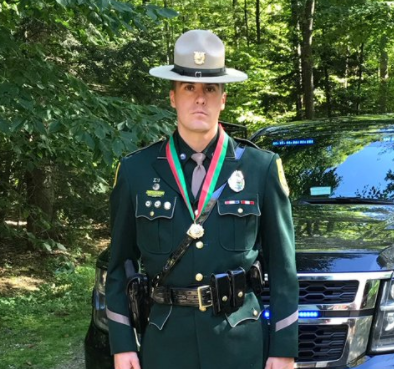 The state trooper fired for conducting illegal searches during a traffic stop that ended up costing the state more than $200,000 can still work as a police officer in New Hampshire.

Haden Wilber, whose termination by the New Hampshire State Police was upheld by the Personnel Appeals Board this week, continues to hold a valid certification to be a law enforcement officer, according to David Parenteau of the New Hampshire Police Standards and Training Council.

Wilber had been working part-time as an officer with the Kingston Police Department.

“Mr. Wilber’s certification remains valid; however, his status as a part-time officer at the Kingston police department is inactive,” Parenteau said.

Kingston police did not respond to a request for comment.

Parenteau said the Council had set a hearing on Wilber’s certification in December of 2021 but allowed it to be continued as Wilber fought his termination. The Council is monitoring the case for any other possible appeals, and Parenteau said that if Wilber applies to work in law enforcement in New Hampshire he will have to go before the Council.

“In the event Mr. Wilber pursues law enforcement employment in New Hampshire, the matter will be brought before the Council for a hearing,” Parenteau said.

Meanwhile, the state is fighting a court order to release Wilber’s discipline records from his time as a State Trooper. Merrimack Superior Court Judge John Kissinger ruled in favor of the New Hampshire American Civil Liberties Union, stating that the records are public and need to be released.

However, the state is appealing the ruling to the New Hampshire Supreme Court. The Court has been ruling in favor of public disclosure of police discipline records in recent years.

Wilber was fired after he was found to have conducted illegal searches during a 2017 traffic stop, and for reportedly lying during the subsequent internal investigation.

Wilber was a 13-year veteran of the State Police when he was put on the state’s Laurie List, also known as the Exculpatory Evidence Schedule, and fired as a result of the investigation into his alleged illegal actions.
Wilber was accused of lying about evidence during the February 2017 traffic stop of a Maine woman, Robyn White. White ended up in jail for 13 days and subjected to body scans and an internal cavity exam, based on Wilber’s false statements, according to her lawsuit which was settled last year.

White could not be reached for comment. Her attorney, Lawrence Vogelman, did not respond to a request for comment.

During the internal investigation, Wilber was found to have also illegally searched White’s cell phone without a warrant. According to the termination letter Wilber received last year, at one point he took the cell phone out of the State Police Troop A evidence locker, and it has never been seen since.

During the investigation, Wilber claimed he was trained to conduct his searches in that manner, when confronted about the illegal cell phone search. Wilber told the investigator that troopers on the Mobile Enforcement Team “do that all the time,” according to the termination letter.