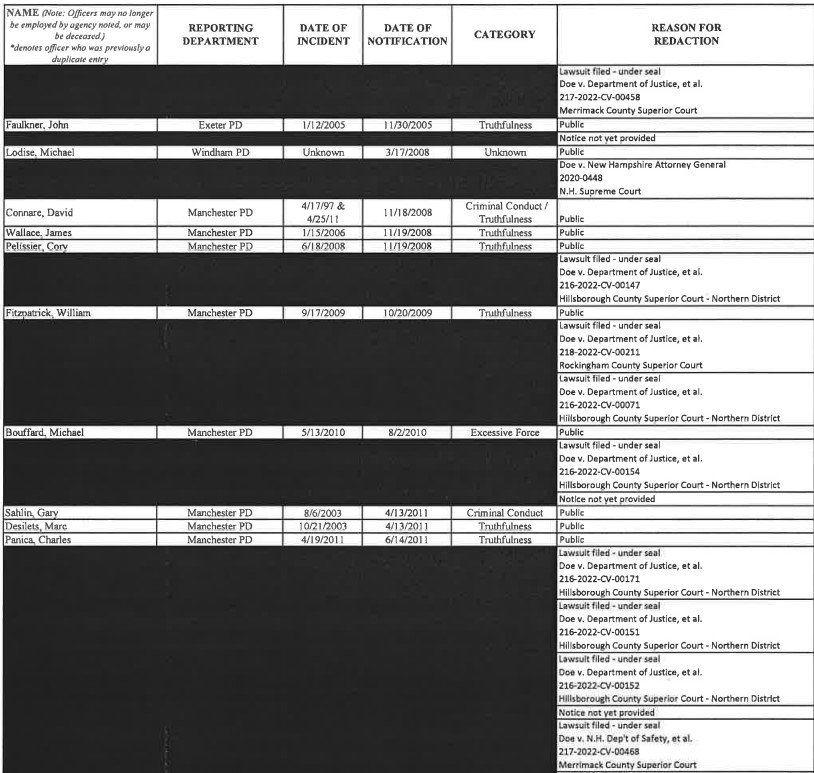 Screen shot of a portion of the Exculpatory Evidence Schedule, also known as the Laurie List, that was released earlier this month.

The names of nine more current and former police officers were made public Wednesday on the state’s Exculpatory Evidence Schedule, the Laurie List of officers known to have sustained credibility issues.

An updated list kept by the state Attorney General’s Office was published with a total of 183 names public now out of 265 names on the list as part of the quarterly report Attorney General John Formella is required to file. In his last quarterly filing, there were 174 names made public.

A total of 72 officers and former officers have filed lawsuits in Superior Court seeking to have their names removed before they become public because of a relatively new law passed last September. Two lawsuits have already been dismissed.

The law requires the names be made public but gave people on the list the opportunity to file a lawsuit to argue why their name should be removed and remain confidential until a judge makes a final determination.

The new names revealed on Wednesday’s list include Brandon Walker, the former Pittsfield officer charged with impersonating a police officer; Ronald Scaccia, a former Nashua police officer who is now listed as the executive vice president of the New England Police Benevolent Association; and Dean Wright, who is listed under Winchester and Hinsdale police departments.

The new names also included two people who had filed lawsuits that were dismissed or nonsuited. Katie Zamore was listed under the Keene police department. Her name became public because her lawsuit was nonsuited.

Matthew Doyle was listed under the Kensington police department. His lawsuit was dismissed so his name became public.

Robert Russell, who is listed under Dover police, had told the attorney general he was going to file a lawsuit, but didn’t, so his name became public, according to Mike Garrity, Formella’s spokesman.

A few others were made public for the first time because they were past the deadline to file a lawsuit because of returned mail issues when they were first notified that they could file.

The EES compliance report, which must be issued quarterly, is dated July 5, but was not published online until July 6 and was due July 1.

There are currently 70 pending lawsuits brought by officers trying to keep their names from becoming public.

The lawsuits have been sealed and are filed under John or Jane Doe aliases in Superior Court. For the first time, Formella released the case numbers and the courts where they are filed.

These numbers do not include the 30 officers who were removed from the list since 2018 under an internal protocol at the attorney general’s office or the names of corrections officers that were removed because they didn’t fit the criteria of the new law.

There are also a handful of officers who haven’t been reached because they are either deceased or in the military serving overseas. Formella said his office is actively working on what to do about those cases.

When the Attorney General’s Office first published the list at the end of December, it erroneously included the names of several officers who were fighting their placement in court.

This resulted in the attorney general attempting to unpublish that original list. Of those officers, including retired Keene Police Detective James McLaughlin, and former Hanover Police Captain Mark Bodanza, who were publicly identified briefly by mistake, none have since appeared on the public Laurie List.

The current law is the result of a compromise between the attorney general and ACLU-NH and five newspapers that sued in a public records lawsuit to have all the names on the list made public.

It is important for criminal defendants to know if an officer with credibility issues testified against them. If such information wasn’t disclosed before trial, the defendant could seek a new trial.