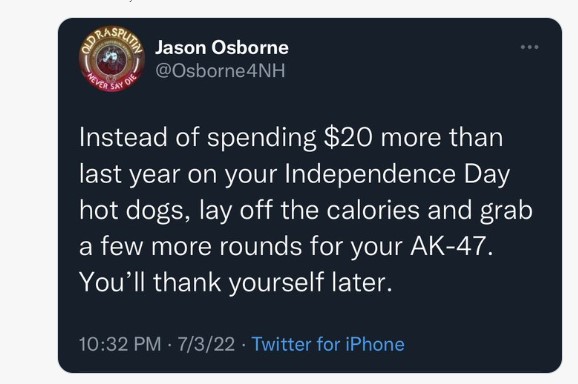 House GOP Leader Jason Osborne’s tweet suggesting people buy more ammunition for their AK-47 instead of hot dogs the night before a gunman killed six people and injured 38 at a July 4th Parade from a rooftop in Highland Park, Ill., caused outrage on social media and finger pointing in New Hampshire politics.

Osborne, who is serving his fourth term in the NH House representing Auburn, Chester, and Sandown, tweeted July 3 at 10:36 p.m.: “Instead of spending $20 more than last year on your Independence Day hot dogs, lay off the calories and grab a few more rounds for your AK-47. You’ll thank yourself later.”

The next morning, the deadly scene unfolded for paradegoers in the Chicago suburb of Highland Park. Osborne didn’t immediately respond to a message seeking comment. On Facebook, Osborne posted Tuesday afternoon, “This is America. Last I checked, owning a rifle is a legal, normal, responsible thing to do – not to mention a Constitutionally enumerated right. If you agree, remember to vote in November.”

Rep. Rosemarie Rung, D-Merrimack, tweeted: “This is your daily reminder that this guy is the leader of NH House Republicans and he is on the ballot in November.”

Sununu didn’t immediately respond to a request for comment by email.

Less than two weeks ago, Sununu signed into law HB 1178 prohibiting the state from enforcing any federal statute, regulation, or Presidential Executive Order that restricts or regulates the right of the people to keep and bear arms.

Sununu said at the time: “New Hampshire has a proud tradition of responsible firearms stewardship, and I’ve long said that I’m not looking to make any changes to our laws.

“This bill will ensure that New Hampshire’s law enforcement efforts will be on our own State firearms laws – and that’s where I believe their focus should be,” Sununu said.

“Rep. Osborne’s flippant remark about stockpiling ammo for semiautomatic weapons was particularly egregious given the barrage of firearm killings our country has endured in recent weeks.  Sadly, this tweet simply continues Rep. Osborne’s penchant for mocking the gun violence crisis in our country.  Just last week, Rep. Osborne tweeted a YouTube video mocking the severity of illegal homemade guns, and before that he suggested the solution to school shootings is firearm training for first graders.

“Granite State lawmakers should be implementing policy to prevent senseless acts of violence, not jeering from behind their computer screens as more Americans die,” Cote said.