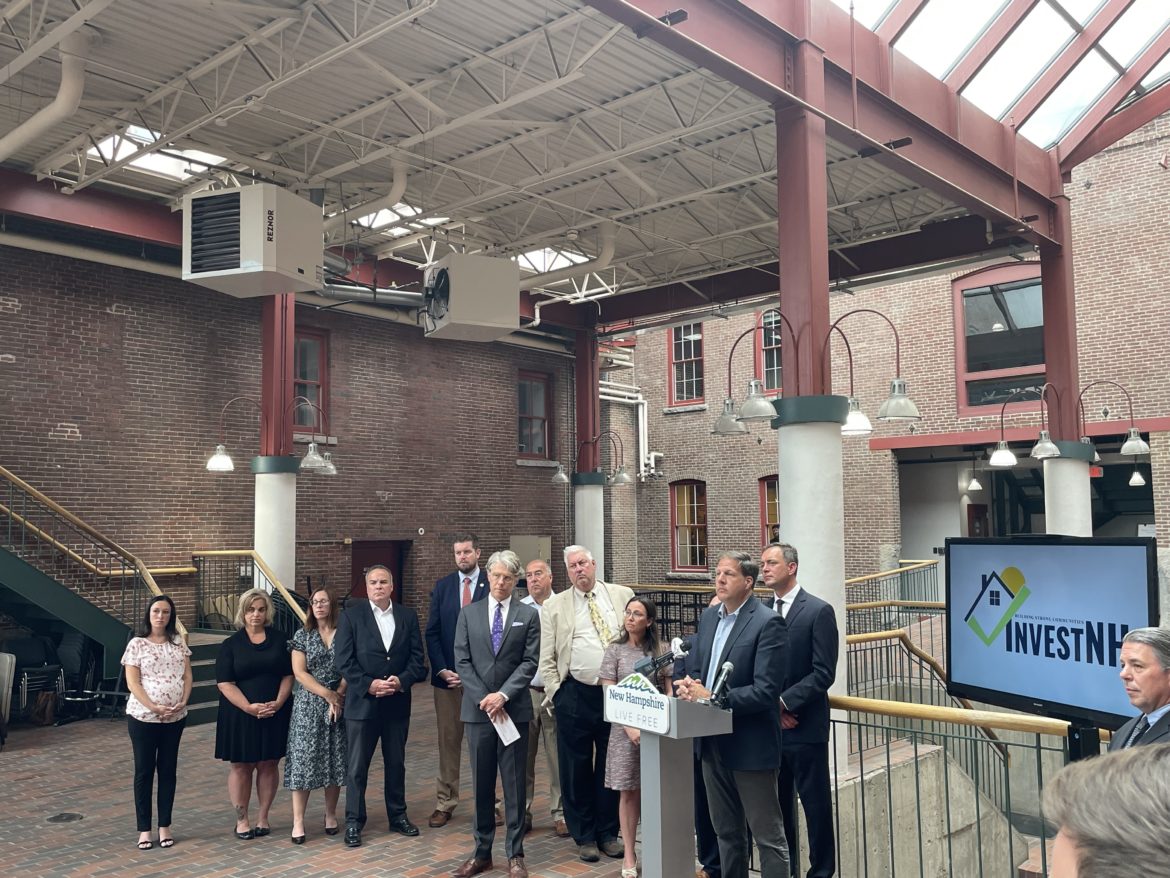 Flanked by mayors from Rochester, Keene, and Concord, and Commissioner Taylor Caswell, and others, Gov. Sununu spoke at the new state Department of Business and Economic Affairs offices to announce the opening of the program which uses federal American Rescue Plan Act dollars to get at one of the state's most critical needs: more workforce housing to help support businesses in need more workers.

CONCORD – Saying it will produce thousands of new units of low- to moderate-income housing in the state in the coming months, Gov. Chris Sununu, mayors from three cities, and developers gathered in Concord to announce applications for a $100 million affordable housing fund to begin this month online.

The InvestNH Housing Fund has a website that was going live Tuesday and applications for about half that money will be able to be accepted as early as next Monday.

Flanked by mayors from Rochester, Keene, and Concord, Sununu met at the new state Department of Business and Economic Affairs offices to announce the opening of the program which uses federal American Rescue Plan Act dollars to get at one of the state’s most critical needs: more workforce housing to help support businesses in need more workers.

Commissioner Taylor Caswell said the percent of available two-bedroom rentals in the state is below 1 percent and considered unhealthy from the business community’s perspective.
Sununu’ $100 million InvestNH Housing Fund offers funds for developers, both for-profit and not-for-profit and small landlords who may want to take a single-unit existing house and make it into multiple units.

It will cover hard costs and help to defray some of the inflationary impacts the governor said developers are now facing. There is also money for municipalities to tear down old structures in their communities and upgrade zoning laws.

InvestNH Capital Grant Program will open at www.Invest603.com and will include $60 million in gap funding for construction and hard costs for housing developers.
The other programs will begin taking applications on July 29 and include Planning and Zoning Grants for municipalities and the Demolition Grants which will help defray demolition costs for unstable buildings.

There is a “broad universe” of projects which will compete for the funds and there will be one round only so that the state can see what all the proposals are at one time.

The hope is that it will be spread out, with funding going to every county but that, Sununu said, will be predicated on who applies.

By September, he said the state will likely have chosen which projects to approve and will go to the Executive Council for final approval on the grant requests.
Sununu said he was pleased to see this innovative idea he had get legislative support and be able to come together in a matter of months, rather than years.

There will be a webinar July 7 and it will be recorded and on the website to help answer potential applicant questions. More information here: www.Invest603.com. Sununu predicted the money will go fast and a long way to help ease the housing crunch the state is now facing.