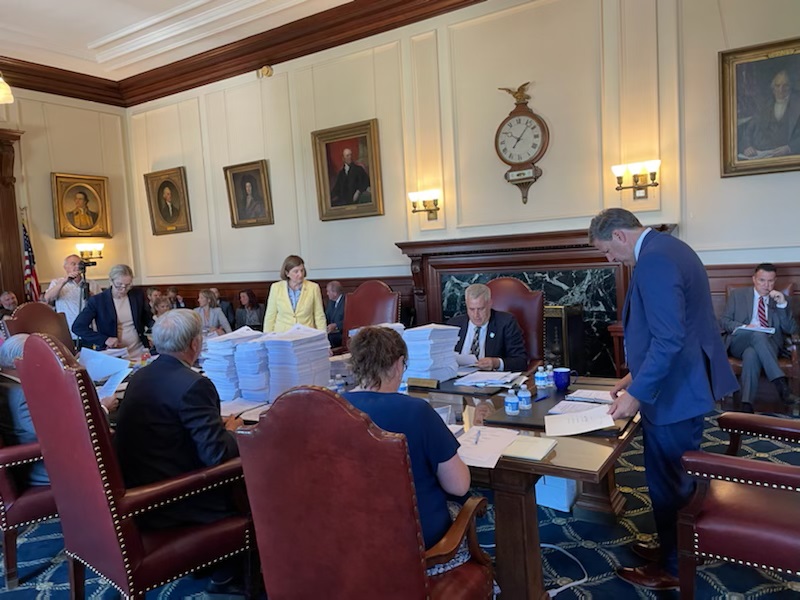 CONCORD – Councilor Cinde Warmington pressed Gov. Chris Sununu on what he plans to do to protect abortion providers and their out-of-state patients at Wednesday’s Executive Council meeting.

Will New Hampshire participate in other states’ investigations when their residents come here for an abortion?

Warmington asked Sununu what steps are being taken to protect women and New Hampshire health-care providers when someone from out of state comes here for an abortion. Abortion is legal up to 24 weeks of pregnancy in New Hampshire and Sununu has assured people that nothing has changed, which Warmington insisted isn’t the case.

This just days after the U.S. Supreme Court’s decision to strike down Roe v. Wade, leaving abortion rights up to individual states.

Sununu said nothing in the state has changed and New Hampshire would not be involved in impacting laws in other states that have made or will make abortion illegal.

Sununu, a self-described pro-choice Republican who is running for re-election, signed into law in 2021 New Hampshire’s first abortion ban in modern history which went into effect Jan. 1, 2022. It criminalizes healthcare providers who could be imprisoned for up to seven years and fined up to $100,000 if they perform an abortion after 24 weeks.

“Are you going to stand up for the women and children of this state and stand up for the patient providers and provide that protection?” asked Warmington of Concord, the only Democrat on the Council.

“Other states? no,” Sununu said. “Right now we have no plans to affect the laws in other states.”

Warmington said: “So if someone tries to extradite a patient from New Hampshire, you are going to allow state resources to be used for that purpose?”

Sununu said: “I can’t control laws in other states.”

Warmington said: “I fully understand that the Roe v. Wade decision did not affect you personally, but for half the population who just became second-class citizens, right, so I understand. But what I want to know is what are you going to do to protect the patients and providers in our state who are going to be investigated and prosecuted. Are we going to participate in investigations by other states?”

Specifically, Warmington asked if state employees would be permitted to help other states collect prosecutorial evidence.

Warmington said other states are taking action to protect abortion providers and out-of-state residents who come for abortion services.

Health and Human Services Commissioner Lori Shibinette said she believed any decision to participate would be up to the legislature.

Warmington said: “This is what other governors are doing to protect patients and providers in their state. We’re not doing anything. We’re not looking at it….” and before she said another word, Sununu interjected “nothing has changed in this state.”

Warmington said: “Let me assure you, governor, that something has changed. Dramatically.”

In an email to InDepthNH.org, Sununu said: “I answered clearly that the state is not taking any additional actions. NH will not aid or assist in another state’s investigation or prosecution. We will not be extraditing individuals or doctors for what other states perceive as unlawful. As I’ve long said nothing has changed and a  woman’s right to choose is the same today as it was two weeks ago.”

At a press conference after the Council meeting, state Sen. Dr. Tom Sherman, a Rye Democrat running against Sununu, held a news conference with Warmington.

“Today, Cinde Warmington and I called on the governor to take action to make sure healthcare providers cannot be prosecuted for providing medical care in New Hampshire. Republican and Democratic governors around the country have already proactively acted, we should do the same.

“New Hampshire has some of the best doctors in the country for women who might need an abortion to save their own life or the live of another child in the case of twins. Those decisions should only be made by a woman and her doctor,” Sherman said.

HOUSING AND VETERANS ISSUES
Almost $23 million in federal funding was dedicated to helping Easter Seals of New Hampshire transform the former Daniel Webster campus tract along the Merrimack River into housing for veterans and a retreat center, which could be renovated in as few as 18 months.

The Executive Council has toured the aging buildings at the former Webster homestead and is now committing one-time American Rescue Plan Act resources to provide a new campus to benefit veterans.

The money will come in two separate chunks and the buildings, which were recently owned by Common Man owner Alex Ray, for a rehabilitation center that was then acquired by Easter Seals.

Easter Seals will be responsible for staffing the facility.
The Council had a tour of the property on April 20 and met with Easter Seals officials about the vision they have for the property along Route 3 and just south of the city.

Executive Councilor Joe Kenney, R-Wakefield, whose district includes the property, said he appreciated the tour “opening my eyes to it…it’s a great project and I think it will be very impactful.”

BERLIN GETS REDEVELOPMENT HOUSING GRANT
The Council voted to authorize $500,000 under the Community Development Block Grant Program for the city of Berlin to support the Brown School Affordable Housing Renovation project situated at 190 Norway Street.
The grant, which will be matched, comes from federal funds.

Kenney said he understood that the former elementary school, the city’s last such facility was closed and due to a lack of students, is being consolidated at other schools.
He said he believed the city was giving the Brown School to the project for $1.

He was told there was some local opposition to the project at a public hearing but that the city decided to move forward.
“I have not heard boo on this subject,” Kenney said from concerned constituents.

INVEST NH TO BEGIN IN JULY
Taylor Caswell, commissioner for the state Department of Business and Economic Affairs, who is in charge of the state’s efforts to roll out the governor’s new $100 million INVEST NH low- to moderate-housing development incentive grant program, said he thinks that the program will be “ready to go in a few weeks, at least the initial component of it,” and that there would likely be a press conference after the Fourth of July holiday.

$10M FOR SCHOOL SAFETY
After the recent school shooting in Uvalde, Texas, New Hampshire law enforcement and school officials have been looking at safety precautions here. They received good news in the form of $10 million in federal funds approved by the Council Wednesday for more school security resources.

The Council also approved a $5 million increase in existing contracts with contractors for COVID-19 testing at New Hampshire K-12 schools through the next school year, by increasing the total price from $20 million to $25 million using federal money.

JUDICIAL NOMINATION, HEARINGS
Lisa M. English of Weare was nominated by Gov. Chris Sununu as justice to the New Hampshire Superior Court. A public hearing on English’s nomination and three other potential justices will be held on July 6.
The hearing for English will be at 3:45 p.m. at the State House.
Hearings for other candidates, who are all nominated to the state’s circuit court, will be held prior to the one for English.
The hearing for Sandra Cabrera will be at 11 a.m.; 1 p.m. for Justin Hersh, and 2:30 p.m. for Joseph Tessier.