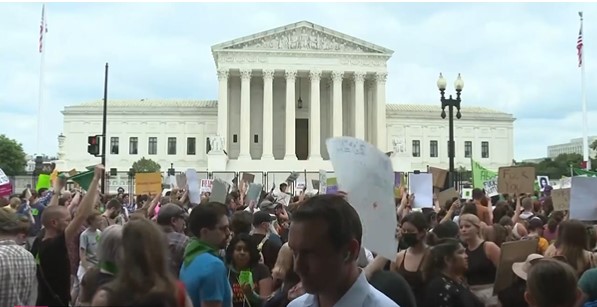 Screenshot from YouTube of crowd gathering at the U.S. Supreme Court in Washington D.C. on Friday after Roe v. Wade overturned.

CONCORD – The U.S. Supreme Court’s much-anticipated decision to overturn the 1973 landmark abortion rights case of Roe V. Wade got a quick and forceful reaction from both political sides of the debate Friday while also mobilizing protesters.
The decision https://www.supremecourt.gov/opinions/21pdf/19-1392_6j37.pdf which was expected following a leaked document seven weeks ago was announced Friday morning.

“This must not be the final word,” said President Joe Biden calling the ruling “cruel” and out of step with American values. He urged voters to get out in droves this fall and elect representatives who will support codifying Roe. V. Wade into the law of the land.

Planned Parenthood New Hampshire Action Fund and allies plan to gather outside the New Hampshire Supreme Court at 5 p.m. to rally in support of abortion rights as well as in Dover at Henry Law Park, Exeter at Town Hall, Hanover at The Green, Keene at The Square, Lancaster at Centennial Park, Manchester at City Hall Plaza, and Plymouth at the intersection of Tenney Mountain Highway and Highland Street, and Portsmouth at Market Square.

Republican Gov. Chris Sununu who said he considers himself “pro-choice,” said, “Regardless of this Supreme Court decision, access to these services will continue to remain safe, accessible, and legal in New Hampshire.”
Dr. Tom Sherman, the Democratic nominee for governor in New Hampshire, said residents should not trust Sununu.

Sherman said he would support efforts to codify it into New Hampshire law.
“Access to safe abortions and contraceptives have allowed women to grow their careers and make choices that are right for them and their families…Yet those rights are being attacked across the country, and just last year Gov. Sununu signed New Hampshire’s first abortion ban into law that made no exceptions for rape or incest or fatal fetal anomalies. Sununu’s attacks on women’s rights are cruel, and they’re not New Hampshire. I will fight to make sure the Live Free or Die state honors women’s right to make their own medical decisions, even if D.C. or New Hampshire Republicans try and institute further abortion bans.”

Sununu has since signed a legislative measure to allow for abortions after 24 weeks in cases where a fatal fetal diagnosis has been made.

The Senate Democratic Caucus sent Sununu a letter Friday asking him to summon the General Court to convene in Special Session to take swift action to codify the right to safe and legal abortion previously protected at the federal level by Roe v. Wade.

U.S. Senator Jeanne Shaheen, D-NH, the state’s senior senator, called it a “dark day.”
“I am gutted by the Supreme Court’s decision to turn back 50 years of precedent by overturning Roe v. Wade. My heart breaks for mothers and grandmothers who marched and fought to secure this watershed achievement, and for the girls who now face a grim future without access to life-saving health care and fewer fundamental rights. The highest court in the land failed half of the country today,” said Shaheen.

U.S. Sen. Maggie Hassan, D-NH, who is running for re-election, said the high court has “decided to take away a woman’s most fundamental freedom,” and that if the Senate is controlled by Republicans “Mitch McConnell has made it clear that the ultimate objective is to ban abortion nationwide.”
“Today, the Supreme Court…pulled women — and our country—backward to a time when women were second-class citizens.

State Senate President and businessman Chuck Morse, a Salem Republican who is vying to unseat Hassan, said in a Tweet “I’m proud of my pro-life record in the New Hampshire State Senate. Last year we settled the law in New Hampshire that permits abortions in the first six months while banning late-term and partial-birth abortions in the last 12 weeks of pregnancy – a policy that the vast majority of Granite Staters support. This decision has no impact on New Hampshire. I strongly believe that the states should have the right to govern policy in their respective states as the Supreme Court has ruled.”

Members of the Democratic congressional delegation all condemned the decision.
Congresswoman Annie Kuster, D-NH, a longtime advocate of abortion rights, slammed the decision.
“I am devastated, but not surprised by the Supreme Court’s decision to overturn Roe v. Wade. A generation of women came to rely on the fundamental right to make their own personal reproductive decisions, and all of that progress ends today. This ruling will have an immediate, detrimental impact on women and their health, autonomy, and freedom across our country.

“Today’s Supreme Court ruling inserts the government directly into the private lives of women and their families, and that is not what Granite Staters want. Although this decision is a setback, we will not give up the fight for women’s reproductive freedom,” Kuster said in a statement.

Congressman Chris Pappas, D-NH, said “This decision is a devastating blow against the health, well-being, and personal freedom of women in New Hampshire and all across our country.

“For nearly 50 years the right of women to make their own medical decisions has been the law of the land, and today a radical majority on the Supreme Court decision ripped that right away by opening the door for states to enact draconian laws limiting access to abortion and reproductive health care.”
“The vast majority of people in New Hampshire and across the country support the right to choose. It’s something that I have heard about non-stop as I traveled around my district.”

Planned Parenthood of Northern New England planned a press conference Friday to go over the impacts of the ruling.

In advance of that briefing, it was noted in New Hampshire, that abortion remains safe and legal before 24 weeks, and after 24 weeks in cases of life of the pregnant person or a fatal fetal diagnosis.

“The consequences of this devastating decision will fall largely on people who already face the greatest barriers to health care due to this country’s legacy of racism and discrimination, including Black, Latino, and Indigenous communities, people with low incomes, LGBTQ+ people, immigrants, and people living in rural areas,” the statement read.

Kayla Montgomery, vice president of Public Affairs for Planned Parenthood of Northern New England and Planned Parenthood New Hampshire Action Fund said “By overturning Roe v. Wade, the Supreme Court has now officially given politicians permission to control what we do with our bodies, deciding that we can no longer be trusted to determine the course for our own lives. This dangerous and chilling decision will have devastating consequences across the country, forcing people to travel hundreds, sometimes thousands, of miles for care or remain pregnant.

“In New Hampshire, abortion is still safe and legal before 24 weeks. As the only state in New England without proactive protections for abortion rights, however, we know the future of access will depend upon each election and who holds power in Concord,” Montgomery said.