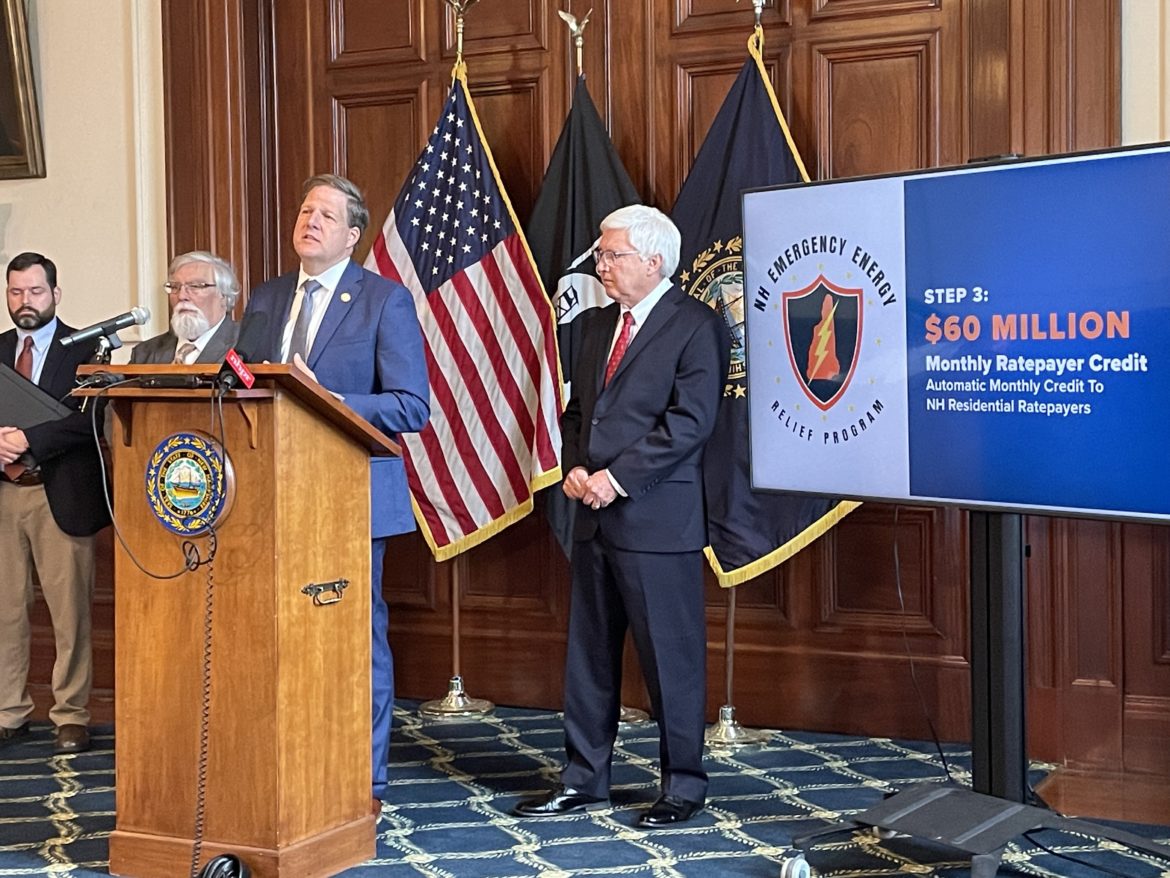 There will be no need to apply for the program as the total $100 credit will be placed on ratepayer bills, Sununu said.

Dr. Tom Sherman of Rye, who is running against Sununu, called it a one-time bandaid.

“Thanks to the hard work of our federal delegation, New Hampshire has additional funds it can use to provide relief to residents who will be hit hard by rising energy costs,” said Sherman.

“But one-time bandaids are a hallmark of this governor, instead of taking strategic action to lower energy costs or property taxes long-term. Sununu’s PUC commissioners slowed energy efficiency planning that would save money, and he’s repeatedly vetoed measures to diversify our energy resources and leave us less dependent on the price of natural gas.”

“This program was only possible because our federal delegation secured critical relief that has allowed the state to build a surplus,” said NHDP spokesperson Gates MacPherson. “Chris Sununu and Chuck Morse are once again trying to take credit for the federal funds our delegation delivered while at the same time pushing the agenda of their big oil and gas allies.”

Some utilities are seeking a 50 percent increase in the typical electric bill as a pass-through cost due to the soaring price of natural gas, which is used to make about 60 percent of the state’s electricity.

Eversource, which provides power to more than 500,000 and is the state’s largest utility, asked for a rate increase from the Public Utilities Commission and it follows a similar request approved for Liberty. NH Electric Cooperative expects a similar rate request at its board meeting on June 28.

Sununu blamed Democrats in Washington for the crisis and noted that his past vetoes and rejections of New Hampshire Democratic initiatives on expensive renewable programs actually protected consumers from higher prices than they are now.

Sununu noted that his administration is not stopping at the $60 million credit but is going to provide air conditioning and cooling assistance this summer for the estimated 24,000 state households who have already qualified for the Low Income Heating Assistance Program this past winter.

There is $7.5 million left over in the LIHEAP program from last year.

These are programs managed by regional Community Action Programs CAPs and federal guidelines are used to determine who qualifies based on income.

“Also, we are planning for what could be a really tough winter,” with expected increased prices for home heating fuel, Sununu said.

He noted that there will be increased funding available for those who qualify under the LIHEAP program from leftover funds and an opportunity to apply a month earlier than in the past.

He said there will be a $25 million increase in winter 22/23 LIHEAP funds and the program will start in November.

Predictions are that home heating prices will be considerably higher than last winter so the doubling of money in the program will help meet the demand.

The state has four major electric utilities and all are “on board” and meeting to look at any regulatory flexibility they have, Sununu said.

This could include expanding forgiveness programs for past, unpaid utilities and extending the timeline for payment plans.

Morse thanked Sununu for “reacting quickly” and said it has been the state’s fiscal discipline that has helped ameliorate the existing problems with high energy prices.

He said the Democrats’ “failed policies on energy are showing up everywhere.”

Packard also thanked the governor for putting the initiative forward.
“We, as Republicans want to give you back your money,” Packard said. “It will help tremendously.”

He noted gas prices are up 117 percent from January 2021 to January 2022.
Biden is reportedly going to ask Congress today to temporarily suspend the federal gas tax.

“When you account for the unprecedented spending coming out of D.C. that has unleashed record inflation, the uncertainty in the energy market, the war in Ukraine, the price of natural gas that has been surging, is hitting everybody in a very severe way and impacts day-to-day life and really, folks are having to make very tough decisions at the kitchen table when balancing their checkbooks,” Sununu said. “Today, we are looking to provide New Hampshire citizens some relief.”

Sununu compared Massachusetts energy rates which have gone up 21 percent compared to New Hampshire’s 8 percent between 2016 and 2021.

In the long-term, he said there will be efforts made to transition to more renewable power options and said offshore wind has great potential for the Granite State.

Jared Chicoine, commissioner of the state Department of Energy, said the Executive Council will be asked next week to approve a contract to look at the viability of offshore wind.
He said assessments will include the environmental impacts and benefits.

Sununu said the state has more opportunities than other states to develop offshore wind and hydro.

“States have to find their right path and their right transition,” Sununu said. “A transition to renewable energy is the long-term solution for everybody. But it has to be a transition. It is not going to happen in five or just 10 years, it is going to happen over time and in New Hampshire, our role is to do it at the right pace so we can make those investments and create that infrastructure without overburdening the ratepayers.”

“Granite Staters are struggling with high costs, and we worked to pass emergency relief – including through securing flexible funding for the state through the American Rescue Plan and increasing LIHEAP funding – that has brought more than a billion dollars to New Hampshire to help address challenges that families are facing in this difficult time. We are encouraged that the resources we’ve secured have helped the state have funds on hand to respond to rising energy costs and that the state is moving forward with direct relief. The state needs to continue to explore additional ways to leverage remaining federal relief funds to support Granite Staters.”