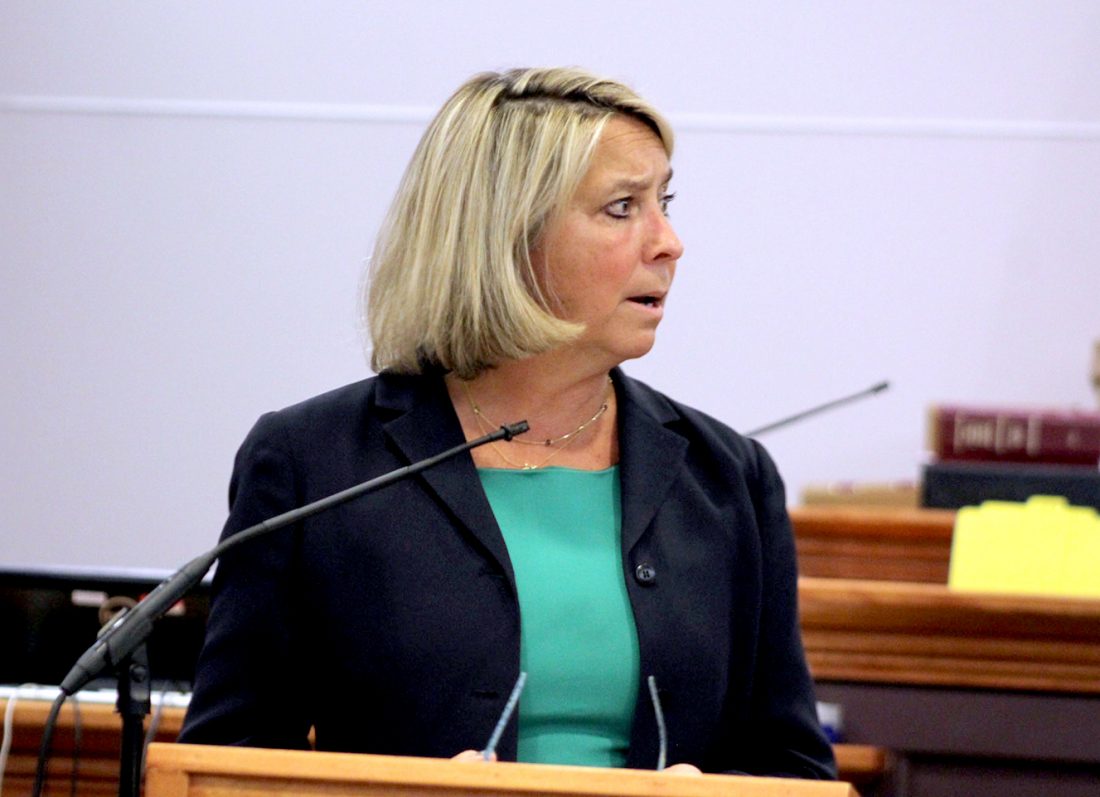 Superior Court Judge Jacalyn Colburn is pictured on the bench in this file photo.

A group of Democratic voters sued Secretary of State David Scanlan seeking an injunction to block use of the new districts in upcoming elections this year.

Gov. Chris Sununu signed the two bills establishing the new districts that would give Republicans a potential 16-to-eight advantage in the Senate and a four-to-one majority on the Executive Council.

On Monday, Hillsborough County Superior Court South Judge Jacalyn Colburn asked the Supreme Court to determine if “any provision of the New Hampshire Constitution prohibits the general court from enacting senate and executive council districts that are drawn in a manner that heavily favors one political party over another?”

And she asked if the court determines there is a prohibition, “are political gerrymandering claims justiciable in New Hampshire state courts?”

And if the court finds both questions to be true “what framework should the Court use to evaluate such claims? In other words, what must a plaintiff alleging unconstitutional political gerrymandering prove in order to be entitled to any relief?” Colburn writes in her order.

The plaintiff and defendants in the case filed a joint motion objecting to Colburn’s intent to send the questions to the Supreme Court without first ruling on the case and considering a preliminary and permanent injunction blocking the use of the districts in future elections.

In their joint motion, they said “the motion for a preliminary injunction presents mostly contested issues of fact not readily susceptible to interlocutory transfer without ruling.”

However, on Monday Colburn issued the order saying, “The Court only seeks guidance on these threshold legal issues as ‘the parties may be saved a prolonged struggle over facts which in the end might be found entirely useless’ in the event such claims are held to be non-justiciable.”

In her order she questions whether the plaintiffs have stated a claim for relief the court could grant, noting the state Supreme Court had ruled that political considerations are “tolerated” in legislative redistricting plans in Burling versus Chandler, and the U.S. Supreme Court — in a divided opinion — ruled claims of political or partisan gerrymandering are not adjudicative under any provision of the U.S. Constitution.

However, she notes other states have taken up the issue based on their constitutions.

“After reviewing these decisions, including the dissenting opinions associated with each case,” Colburn writes, “it is clear that there is a legitimate question as to whether political gerrymandering claims present justiciable issues in New Hampshire courts.”

In their suit, the plaintiffs argue the proposed districts violate the free and fair election clause in the state constitution, because the intent is to prevent Democratic voters from fairly and equally participating in the political process.

They also claim the plans violate the constitution’s equal protection guarantee by denying their right to equal weight of their votes compared to Republicans.

And they also believe the redistricting plans violate the constitution’s guarantee of free speech and association, as the plans discriminate and retaliate against Democrats by diluting their ability to band together and elect candidates of their choice.

“This Court should vindicate the fundamental rights of New Hampshire voters by enjoining future use of the Challenged Plans and ordering the creation and implementation of new Senate and Executive Council plans that comply with the requirements of the New Hampshire Constitution,” the suit says.

In her order, Colburn notes if the Supreme Court decides there are provisions allowing for a judicial challenge to the plans, then her court will need to do the necessary “fact-finding” before reaching a decision.

The court agreed to hold an expedited hearing on the issue of the preliminary injunction if the Supreme Court refuses to hear the request to rule on the three questions the judge raised.

The Supreme Court will first have to accept the request to determine if the case is judiciable before the suit over the redistricted senate and executive council seats moves forward.

A similar suit challenging the Congressional district maps proposed by Republican lawmakers that Sununu vetoed was heard before the Supreme Court, although it originated at the same superior court.

The Supreme Court hired a special master to redraw the congressional district lines when lawmakers and Sununu failed to agree on any plan.

The court voted unanimously to approve the special master’s plan.

After the last general election in 2020, the Secretary of State’s Office tally indicates there are more registered Democrats in the state than registered Republicans, but undeclared or independent voters outnumber the membership of either party.

While Republicans took control of the House, Senate and Executive Council from Democrats in the 2020 election, voters also elected two Democrats to Congress and a Democrat to the US Senate, while the only Republican in higher office is the governor.