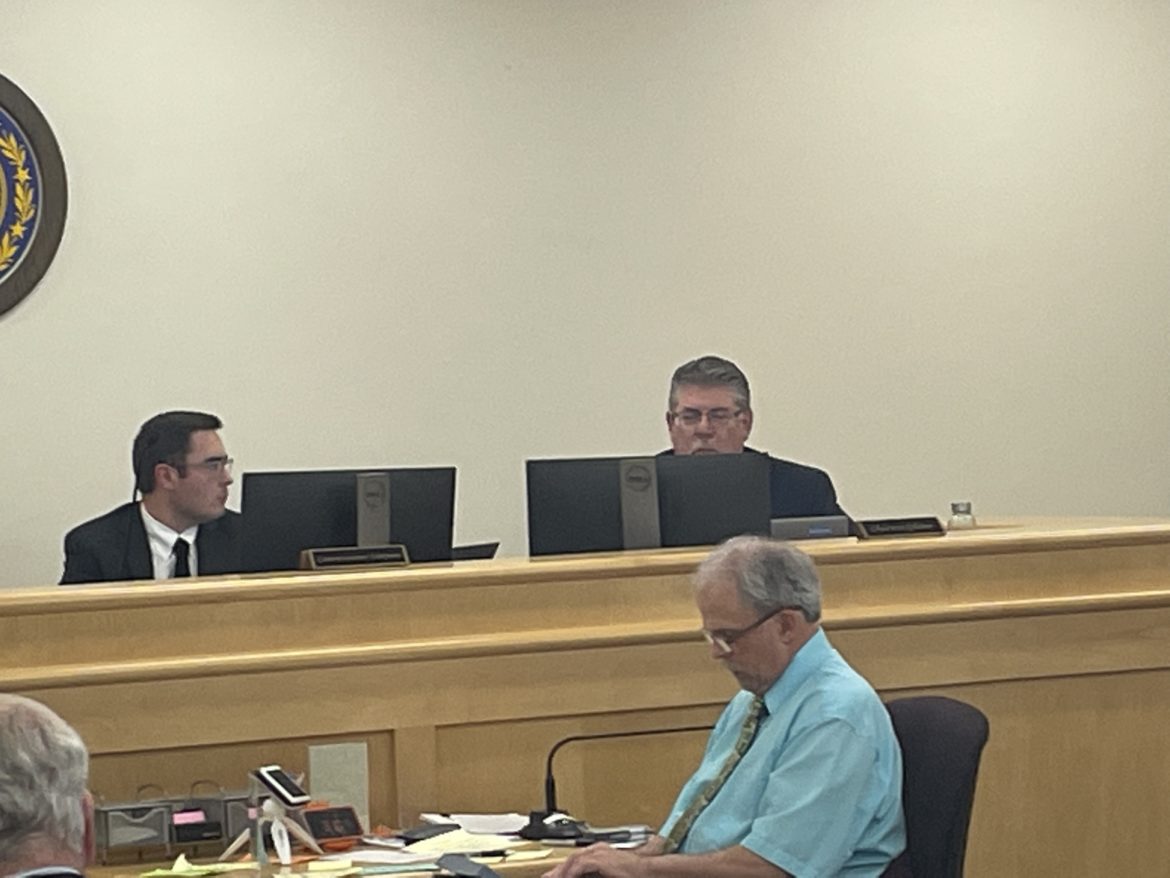 The PUC heard from Eversource Tuesday about its need for rate hikes. From left are Commissioner Carleton Simpson and chairman Daniel Goldner at PUC headquarters in Concord. In the foreground is Steve Patenaude.

CONCORD – The state’s largest utility Eversource argued before the Public Utilities Commission Tuesday to increase its rate as New Hampshire electric consumers brace for bills going up by about 50 percent for at least the next six months.

The state’s four utilities plan to pass on the skyrocketing costs of making the energy to its members and customers and are in the process of getting that approval.

The price hike is mostly because of the exploding price of natural gas, used to make about 60 percent of the electricity in the state. Both utility officials and the state’s consumer advocate agree that the Russian war in Ukraine is disrupting supply chains.

It comes at a pretty lousy time with consumers facing record inflationary hikes at the gas station, grocery stores and elsewhere.

Shortly after Tuesday’s PUC hearing ended, Gov. Chris Sununu sent out a news release saying he will hold a press conference with legislative leaders and officials from the New Hampshire Department of Energy “to announce major new initiatives to help New Hampshire families pay their electric bills this summer” at 9 a.m. Wednesday.

At the Public Utilities Commission hearing Tuesday, Eversource, with more than 500,000 customers in the Granite State, sought permission to essentially charge consumers almost 50 percent more from Aug. 1 to the end of January 2023.

No decision was immediately made but the PUC is expected to rule on the request by the end of this week.

The hearing follows a similar request for a rate hike that was approved by the PUC for Liberty Utilities, providing electricity to the Seacoast and Upper Valley of New Hampshire. That one goes into effect on Aug. 1 and is about a 47 percent rate hike.

New Hampshire Electric Cooperative, the state’s second-largest utility serving 84,000 members in 115 mostly rural communities across the state, will see a similar price request go before its board of directors on June 28, said spokesman Seth Wheeler.

“It is safe to say we are seeing the same price trends in the New England electric wholesale market that have already obliged our neighboring utilities to request increases in their energy supply rates,” said Wheeler on Tuesday.

Unitil, which serves the Concord area’s electric needs, just got a rate decrease for the next six months of 10.1 cents per kilowatt-hour in June but the price has gone up tremendously in just that period of time, said Donald Kreis, the state’s consumer advocate.

Eversource officials told the PUC that requested rates are “just, reasonable and consistent with the public interest” and are passed along with no profit. They would be effective starting Aug. 1.

Solicitation of contracts was “just and fair,” Eversource added, although it did not disclose the number of bidders, something that Kreis said was not transparent and important.

Kreis said the utilities are not making money on the price hikes, and that these are pass-through costs.

He said the state decided to go with the market rate for electricity in 1996 and has largely enjoyed low prices but that the days of cheap natural gas to make electricity are over.

Impacting the state is the fact that it has four seasons with high heating and cooling costs and it is far from generators in Texas, Pennsylvania, and Western Canada.

Before talking with InDepthNH.org, Kreis was outside the meeting at PUC headquarters in Concord talking with CNN, which plans to visit the state to do a story this week on the electric price hikes headed here first.

Eversource officials said they used their Connecticut and Massachusetts bids, which go out a month ahead of New Hampshire’s, to help them predict costs that came in to support the price hike request.

The cost has tripled since the Russian war began in Ukraine in February and is “the driving force” of the hikes, James Shuckerow, director of electric supply for Eversource Energy, told the commission.

“They were exactly what we expected,” Shuckerow said.

The pipeline to New England has also been constrained and this coming winter, it’s expected to get worse as world prices and demands in Europe take the lead.

In the future, some relief may come from buying cheaper electricity from other energy sources like offshore wind, terrestrial wind, nuclear, and solar, and using price timing, which would give consumers credit for not using power in peak time periods.

“They are not tomorrow. They are all in the 2025-out range,” Shuckerow said.

Rolling power blackouts or brownouts are even a potential concern for this winter, he said.

The plan is to get the word out about price hikes through bills and social media although the big customers will hear from Eversource executives.

Customers will be told to “stay tuned,” after the next six months that this is not a customary supply and demand issue, but world events dictating this situation.