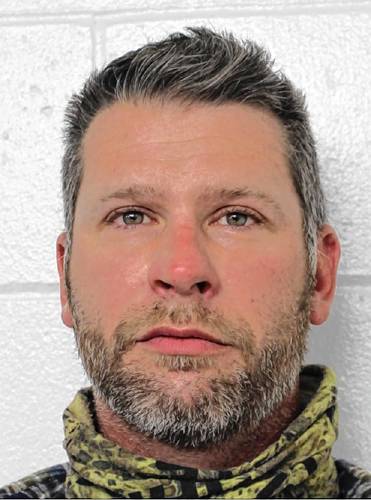 Former Lebanon Police Lt. Richard Smolenski may be headed to trial for cyber-stalking his ex-girlfriend after he refused to agree not to disseminate evidence gathered in the case.

The case was set to be resolved on Wednesday with Smolenski getting the charges placed on file for up to one year, meaning he would escape conviction, and largely any consequences, so long as he remained on good behavior.

Robin Melone, the attorney for the victim, said this case is an example of the different standards of justice for police officers charged with a crime.

“If he was not a cop, would we be having this conversation?” Melone said.

Smolenski waged a campaign of harassment against his ex-girlfriend Nicole Cremo, sending messages to Cremo demanding that she lie to his wife, or face him releasing intimate photos he had of her, according to the affidavit in the case.

Cremo said the justice system is stacked against her and other survivors who report on police officers. She questions why her name was left unredacted in the court records released to the press when Smolenski was first charged, and if that would have happened if he were not a police officer.

“It’s so hard to say in what way I wasn’t failed by the system,” Cremo said.

Smolenski allegedly threatened to contact her family, her employers, and the Grafton County Commissioners if she did not comply. Cremo also feared Smolenski, a veteran law enforcement officer who had also served in the military, according to the affidavit.

During his alleged campaign of harassment, Smolenski used multiple social media accounts to target Cremo. At one point he allegedly created an account using Lebanon Police Officer Paul Gifford’s identity. Gifford would be suspended along with Smolenski, but he was later cleared during the investigation.

The investigative file shows Smolenski was cyber-stalking Cremo while in the Lebanon Police Department, and at his home.

“He absolutely refuses to take any accountability,” Cremo said. “He’s going with he didn’t do this right ‘til the end.”

Cremo was unhappy with Belknap County Attorney Andrew Livernois’s decision to have the case placed on file. She wanted to take that matter to a trial, and she may now get that opportunity.

Melone said Smolenski has refused signing a protective order keeping the discovery in the case secret. That discovery includes data from Cremo’s phone and social media accounts and includes photos and private text conversations.
The case centers on Smolenski using private information he got from Cremo during their relationship, and then using that information to threaten her and make her feel unsafe, all while he continued to stalk her. Now, Melone said, by refusing the protective order he is threatening her again.

“The man’s weapon here was information,” Melone said. “He used his badge as a shield, presuming he would be believed and protected even in the face of forensic evidence. His refusal to agree to a protective order is demonstrative of his arrogance and his ongoing efforts to threaten and intimidate Nicole.”

Smolenski’s attorney, Anthony Di Padova, did not respond to a request for comment, nor did Livernois. Livernois was brought in to prosecute the case in Grafton County in order to avoid any potential conflicts of interest.

Cremo only consented to the deal to have the case placed on file because she felt Livernois was reluctant to prosecute a police officer, and that the county attorney did not have a firm grasp of the case. She thought that at least, Smolenski would not be able to be a police officer again, only to find out that is not the case.

“I thought if I can get anything out of this it would be that he can’t do this to another person ever again in another capacity, specifically posing as one of the good guys but being a bad guy. He agreed to say he won’t try to recertify as a police officer and the charge gets placed on file. I didn’t realize the agreement not to decertify only lasts as long as the case stays on file,” Cremo said.

David Parenteau, with the legal bureau at the New Hampshire Police Standards and Training Council, said Smolenski’s certification to work as a police officer in the state is temporarily suspended. The council is waiting for a resolution in the case before deciding on any further action, Parenteau said, but it is possible for Smolenski to at least apply for recertification at some point.

“If Mr. Smolenski were to seek law enforcement employment in the future, he would be summoned to appear in front of the Council for a hearing,” Parenteau said.

If the case goes to trial, Cremo is going to be ready. She is prepped for cross-examination. In her statement, she said the ordeal has made her stronger.