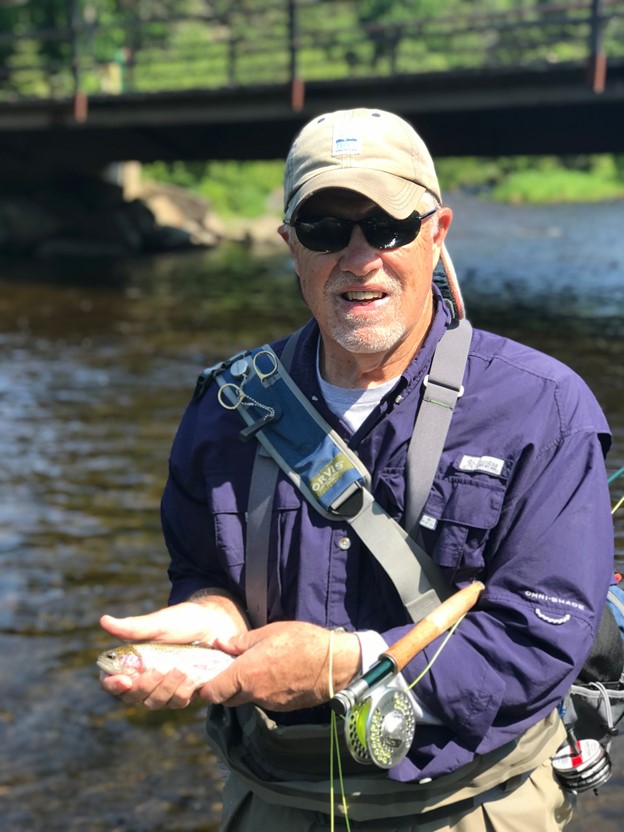 There are times that one needs to fish alone. When I have the need to do so, I have a few favorite spots that I enjoy fishing.

The spots are usually out of the way and require a little bit of a hike to get into. This usually precludes another fly fisher from just dropping in. The spots also have a characteristic that makes them endearing, like a little waterfall with a pool, or a pair of eagles that may nest nearby. These spots may or may not contain a lot of fish, but that is not imperative since fishing is only part of the reason I visit.

On this beautiful Spring day, I pack in my three weight Orvis Superfine since I’m hoping to entice a small Brookie to take a dry fly. When I arrive at the spot there is a boulder put there by a glacier from probably thousands of years ago, that was put there just for me, which makes a perfect seat to assemble my rod and observe the river.

I am thinking about how good the sunshine feels. Then  John Denver’s song “Sunshine On My Shoulders” pops into my head and then my mind starts wandering. When I was in college in Chicago I had John Denver’s album “John Denver’s Greatest Hits.” I’d play the album and dream about going to Colorado after I graduated. If you don’t think that music is powerful, how many people moved to Colorado because of the song “Rocky Mountain High”? His words from that song seemed a little prophetic, “More people, more scars upon the land.” If he could only see.

My mind slowed down enough to tie on a size twenty Caddis, and toss it into the head of a pool and let it drift down. As I am casting, my mind again goes off on another tangent. Father’s Day is coming up. I reflected on my relationship with my dad who wasn’t around when I was growing up. My dad’s job and family dynamics contributed to that, but fortunately we were able to spend more time together when I got older and through the efforts of his wonderful second wife.

Then I began thinking about all those men that unselfishly spoke into my life. There were many. My best friend Terry’s parents were some of the first. Terry’s mom was my den leader in Cub Scouts and Terry’s dad was an engineer that always had a project going. Then there was Mr. Van Eden, my Boy Scout leader who taught me all my mad camping, outdoor and survival skills. There was my Uncle Buzz, who was my inspiration to get into teaching and coaching. It was Mr. Atwater who told me I needed Jesus, and he was right.

When I got to college I met the Swider family who took me under their wing. Mr. Swider taught and coached in inner-city Chicago. I learned from them what a family looked like. From my father-in-law Howard, I learned about being a better father. The tug on the end of my line broke my stream of conscience. I landed a beautiful little Brookie. As I released the fish, I had that Deja Vu feeling that you sometimes get while you are driving. When you start driving and you are at point A, and then your mind starts wandering and before you know it, you are at point B and can’t remember how you got there. Scary.

I caught another fish on the Caddis before I called it quits. On the hike out, I was thinking about my son and son-in-law who would be celebrating their first Father’s Day, and my first son-in-law who would be celebrating his sixth. I was also thinking about all those future fly fishing lessons I would be giving with excitement, and most thankful for those men who took their time to invest in my life.