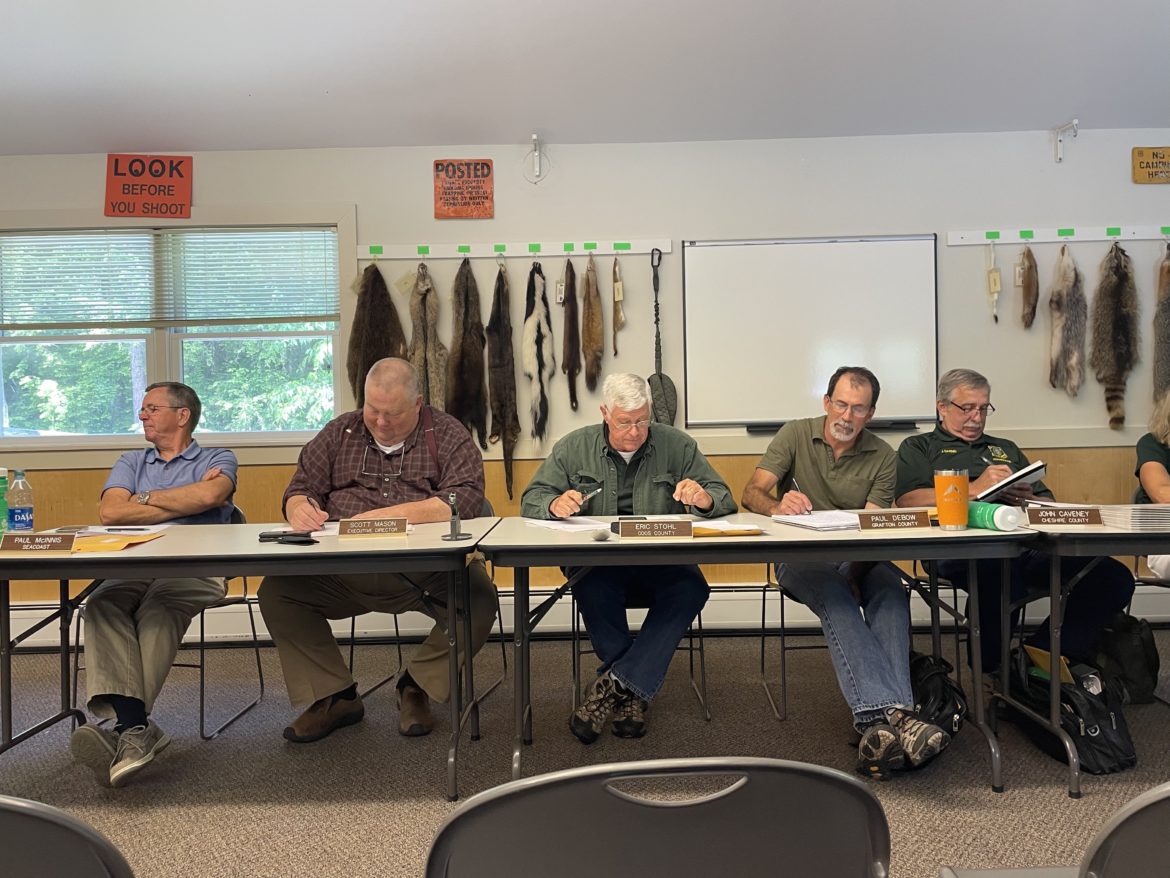 HOLDERNESS – The state’s Fish and Game Commission took steps to improve and protect wildlife habitat at projects in Success, Canaan, and Hooksett Tuesday and discussed the future of a public pheasant hunt.

Meeting at the Owl Brook Hunter Education Center, the commission learned that the cost of buying farm-raised pheasants is up, hunter numbers are down and the state is also losing willing private property owners to host the stocking sites.

Ray Green, Hillsborough County Commissioner, asked, “Is it worthwhile having a pheasant program? I know people are afraid to say that but it needs to be said.”

Department staffers said Green had a valid question while John Caveney, Cheshire County Commissioner, said perhaps the price of the bird is not the only concern to the program.

The state has been losing a site a year, on average, where the birds can be released.

Fish and Game biologist Dan Bergeron told the commission the state was paying about $11.50 a bird and due to added costs for feed, gas, and other inflation costs, that will be going up to $13 a bird or more as part of a three-year purchase contract.

A permit to hunt the bird costs $31.
While the state would be OK for the first and second year, the commission was told that if they do not increase the price of a permit, increase the numbers or reduce the number of birds, the state will be in the red by $20,000 in the third year of the contract.

About 11,500 birds have been stocked each year for about 5,000 hunters.
There was a big jump in license sales during COVID-19 but that is now on the decline.
There are 62 sites across the state, mostly privately held, where the birds are released and the distribution of released birds is based on the size of the site with flood control areas getting larger releases.

Susan Price, commissioner for Carroll County, a pheasant hunter and bird dog owner, said she would prefer to keep a public program and not be forced to join a private club.

“Keeping these open makes sense for the public,” she said. “I find it a pure joy working with a dog on upland game birds,” she said.

Fish and Game Col. Kevin Jordan said from the landowners’ perspective it is high maintenance to tolerate a lot of problems with hosting the stocking.

He said the state as a whole has done a pretty good job retaining the sites and thankfully there have been no major injuries but there are more parking and litter issues associated with the fall hunt of pheasants.

He said many younger hunters are not as into stocked pheasant but more into wild bird hunting like rough grouse and woodcock. He said the state could tap into significant interest far and wide in that resource if it explored it more.

The commission accepted a conservation easement on 400 acres of ecologically important habitat in Hooksett and bought 47 acres of mostly wet woodlands in Canaan.

It also discussed and approved funds to improve the brook trout habitat in the Androscoggin River Watershed.

The land is being donated as a mitigation plan for an unspecified development project in Hooksett and the property will be held by the Bear Paw conservation group with Fish and Game holding the conservation easement which will limit it from ever being commercially developed.
Approval was also given to use $13,000 from the department’s habitat account to acquire a 47-acre property in the Mascoma area in Canaan.

It was appraised at $16,000. The land is sandwiched between the Mascoma and HL Webster wildlife management areas and includes old fields, shrublands, and water access to the Mascoma River, with a lot of snowshoe hare on the property.

Also on the land are red maple, alder, wetlands marsh, and vernal pools. The protected land will benefit many songbirds, the commission was told.

Green asked if it had been checked out for a hazardous waste assessment, but it had not. It had been used for farming, not industrial uses, he was told.

The commission also approved $20,000 for brook trout habitat improvements in Success on the Alder Brook and Sterns Brook in the Androscoggin River Watershed.

It is part of a $215,000 project to improve stream crossings, which will improve aquatic movement and allow for logging trucks to get the wood out.

The majority of the funds for the project would come from National Resources Conservation Service $125,000.
It includes the reconstruction of five, large steel bridges and over 2.5 miles of gravel rebuilt roadwork.
The land is open to the public and there are native brook trout in those waters.

The grants have totaled 970 with $1.1 million spent from the fund to allow for access and habitat improvement.
The money for Fiscal Year 2023 will allow for grants to do field mowing, work with heavy equipment, protect against fire, and for softwood release.

There are projects this year totaling $33,107 for the fiscal year 2023.
The commission approved $40,000 from the wildlife habitat account for the grants.

License sales are the primary revenue generator to operate the Fish and Game Department.
During the pandemic, there was a big surge in license sales across the board but the department is now weathering a post-COVID-19 pandemic decline in sales.

While revenue is lower than projected, the commission was told that its budgeted $9.8 million will still be met.

WEBSITE CALENDAR SUGGESTED
Caveney suggested that the Fish and Game website should have a monthly calendar of all public meetings and events.
Green said it was a good idea and improve information and transparency.

“It should be out there out front,” rather he said, than having to ask his grandkid to find it “behind the scenes.”

Price said she thought it was a good idea and might even help staff.

Derosa said there would likely be a cost associated with it.

Commissioner Bruce Temple said there are caveats and unintentionally, information that is not accurate appears on such sites.

Scott Mason, the executive director, said the department is looking at changes to the website.
A vote was taken by the commission to recommend such a calendar and it was unanimous.

CHILDREN IN THE OUTDOORS

The New Hampshire Becoming an Outdoors Woman Program within Fish and Game is presenting a new program, “Introducing Children to the Outdoors,” on July 22 from 10 a.m. to noon at Livingston Park in Manchester for children ages 5-8 and their caregivers.

Led by Beaver Brook Association outdoor educators and BOW staff, this class will be an interactive nature walk along the trails around Dorr’s Pond, followed by a bring-your-own picnic lunch and information-sharing session.

To sign up, visit nhbow.com and use the online registration link under the Beyond BOW page to register.

The workshop fee of $35 per adult is due with registration and includes in-person instruction, program materials, use of some equipment, and snacks.