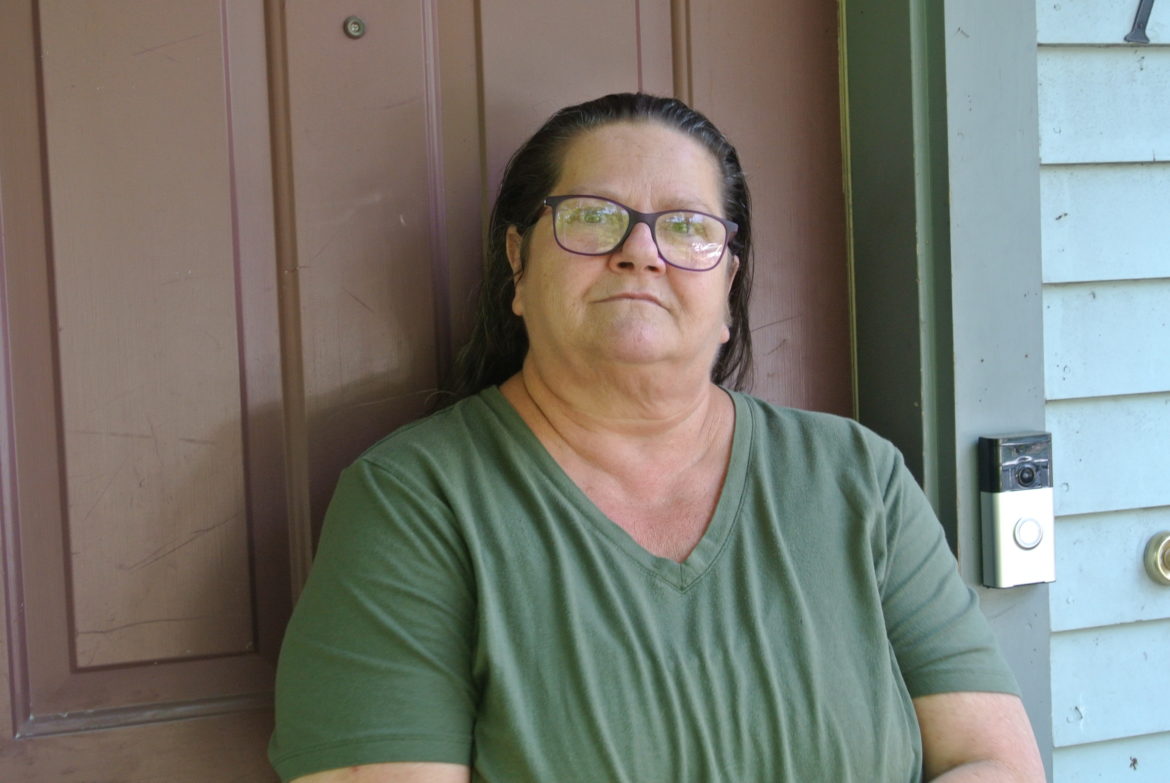 TROY — Donna Pelliccia hoped she and her disabled daughter, Alyssa Acres, could get a fresh start when they moved to Troy three years ago.

Alyssa Acres has a neurological condition and autoimmune disorder that can make it difficult for her to walk at times. Pelliccia is herself disabled after a career as a nurse. They hoped to come to Troy to live at the Cranberry Hill Apartments.

Instead, Pelliccia ended up in jail on charges she made online threats against one of her neighbors, Hayley Philbrick. But there is no evidence that she ever made any threats.

“I cried in jail for seven days,” Pelliccia said.

Soon after she was charged, the case against Pelliccia was dropped.

Pelliccia has spent years claiming that she never sent any of the threatening messages, and that Philbrick created fake accounts in order to get her jailed as part of a harassment campaign apparently motivated by a desire for revenge.

She’s fought to obtain police reports, body camera footage and any kind of document to prove her case, but was unable to make any progress. Then this year, things changed.

First, Philbrick went to police in Jaffrey in January of this year to claim she was being harassed by Acres. This time, however, Jaffrey Police Det. Jeremy LeBlanc didn’t take Philbrick’s word as final and investigated the alleged threats.

Second, Cheshire County Attorney Chris McLaughlin ordered an investigation this year which cleared Pelliccia of sending threatening messages and found that Philbrick most likely made them up. There won’t be any charges coming from that investigation, however, because investigator Cheshire County Chief Deputy Sheriff Todd Faulkner found that police in Winchester mishandled the case.

“I am unfortunately unable to confirm this beyond a reasonable doubt based on the delay in time and the lack of certain investigative work by (Winchester Police) Lt. (Penny) Witherbee that would have aided in my investigation,” Faulkner wrote.

“It’s such a miscarriage of justice, I have no faith in the system,” Pelliccia said.

Faulkner has since retired and could not be reached for comment. McLaughlin did not respond to requests for comment.

Winchester’s former Police Chief Mike Tollett, who supervised Witherbee, is no longer in law enforcement and has taken a job as security for Walt Disney World in Orlando, Florida. He did not respond to a request for comment. Current Winchester Chief Erik Josephson declined to comment, as did the town attorney Brooke Shilo.

Pelliccia lived in Littleton until Alyssa graduated from high school. They wanted to get away from their hometown after Alyssa had been sexually assault, which she wanted to speak publicly about. Without the victim’s permission, InDepthNH.org does not identify sexual assault victims by name.

“We didn’t want her running into that man,” Pelliccia said.

The pair first moved to North Carolina looking for more opportunities, not realizing Alyssa was sick with an autoimmune disease. After getting homesick they moved back to New England and ended up in Berlin and started applying for housing assistance. They were thrilled when they got approved for their apartment at Cranberry Hill.

“I loved it here at first,” Pelliccia said.

Pelliccia started working part-time at the complex and another complex owned by the company, cleaning the laundry rooms until pain slowed her down. Pelliccia has been diagnosed with a connective tissue disorder, leaving her unable to work full time.

“I loved that job, it gave me such a sense of self-worth,” Pelliccia said. “It’s so hard being on disability.”

She still cleaned the laundry room at the Troy complex, and her manager asked her to keep an eye on the complex.

“It’s always good to have a set of eyes around here. If you see something, say it,” she recalls him saying.

Pelliccia started reporting allegations against residents, like Philbrick, fighting in the parking lot, living with boyfriends who were not on the leases, and other violations. Pelliccia also put a Ring camera on her front door which captured what she said were illegal activities.

Philbrick and her boyfriend, Sean McCarron started harassing Pelliccia and her daughter, according to the reports. The harassment escalated until Philbrick moved out in September of 2020 and moved to Winchester.

In October of 2020, Philbrick obtained a protective order against Pelliccia based on Facebook messages from a fake account, according to the sheriff’s report. Then, on Oct. 14, 2020, she reported to Witherbee that Pelliccia violated that order by sending threatening messages. Pelliccia was arrested on one count violating that order and released on personal recognizance bail.

Pelliccia had told Troy Police Chief David Ellis that the accounts involved in the threats were faked, and were not hers. Ellis does not seem to have ever investigated the fake accounts, according to the documents reviewed.

Then, according to the documents reviewed, Philbrick went to the Keene Police Department on Oct. 16, 2020 to report getting more threats from Pelliccia. However, the investigating officer, Cristina Paterno, didn’t buy the story.

“Anyone could have created the Facebook account in retaliation for Hayley needing to move out of the complex. There is not sufficient evidence leading me to believe Donna sent these messages nor does the style of writing match Donna’s,” Paterno wrote in her report.

Philbrick then took the threats to Witherbee in Winchester. Witherbee received the report of these new alleged threats on the night of Oct. 16, 2020, contacted Troy police, and had Pelliccia arrested on a warrant.

Pelliccia said her daughter was terrified watching her mother getting taken out of her house, and Pelliccia feared her daughter’s life would be in danger without her there. Pelliccia was taken to the Cheshire County House of Corrections to be held before her court date.

“Philbrick began to cry and stated something to the effect that an innocent person could be in jail right now,” Witherbee reported.

Both Philbrick and her boyfriend McCarron then tried to cast the blame on Acres. While Pelliccia was in jail, and after Witherbee talked to Philbrick, the Facebook account in Pelliccia’s name that had been sending out the threats was deleted, according to Witherbee.

Witherbee followed up by having Acres’ computer seized for a search, to see if Pelliccia’s daughter, a disabled young adult who relied on her mother, had created the fake accounts to have her mother jailed.

Pelliccia was released from jail on Oct. 21, 2020, and the whole case was dismissed a month later. According to Faulkner’s report, the Winchester investigation seemed to stop at seizing the computers and cell phone.

“After a review of the entire case files I find no evidence to support that any work had been completed to identify the creator of the fake Facebook account,” Faulkner wrote.

He also wrote that even though the computers and cell phone were seized, no forensic work had been done to determine if they were used in creating the fake accounts and sending threats.

The Winchester Police Department has been rocked by scandal for months. Witherbee resigned suddenly in December of 2020, waving her two-week’s notice and asking for an exit interview with the town’s board of selectmen.

In January of 2021, Winchester Chief Mike Tollett, did not have his contract renewed by selectmen in a surprise move. The reason for his ouster in Winchester is still not known. He briefly took the position as chief in nearby Harrisville before quitting and moving to Florida to work at Disney World.

Former Winchester Police Officer Kevin Martel was named on the state’s public Exculpatory Evidence Schedule earlier this year, the so-called Laurie List for officers with credibility problems. This year, Officer Joshua Edson agreed to give up his police certification after the New Hampshire Attorney General’s Office investigation found probable cause to charge him with witness tampering. He is also on the Laurie List.

New Chief Erik Josephson added Lt. James Fisher to the Laurie List for his alleged role in covering up the reason for Edson’s suspension, though Josephson’s attempts to fire Fisher have so far not succeeded.

Josephson did remove Officer Kristopher Fox after he failed to appear in court for three criminal trials.

After her case was dismissed, Pelliccia pleaded with anyone who would listen to get her case investigated. Finally, she sent a letter to the district court, which prompted Faulkner’s review.

In January of this year, Philbrick went to Jaffrey police to claim Acres had been sending her threatening messages. Philbrick claimed that she received the messages within Jaffrey. LeBlanc’s investigation, however, quickly found that Philbrick’s story did not add up.

The Jaffrey case is currently scheduled for an August competency evaluation.

Pelliccia said that she has been told police will not seek any charges in the 2020 case. Instead, Pelliccia has been advised to file a lawsuit against the Winchester Police Department, but that’s not the justice she is seeking.

“Money was never important to me, it was accountability,” she said.