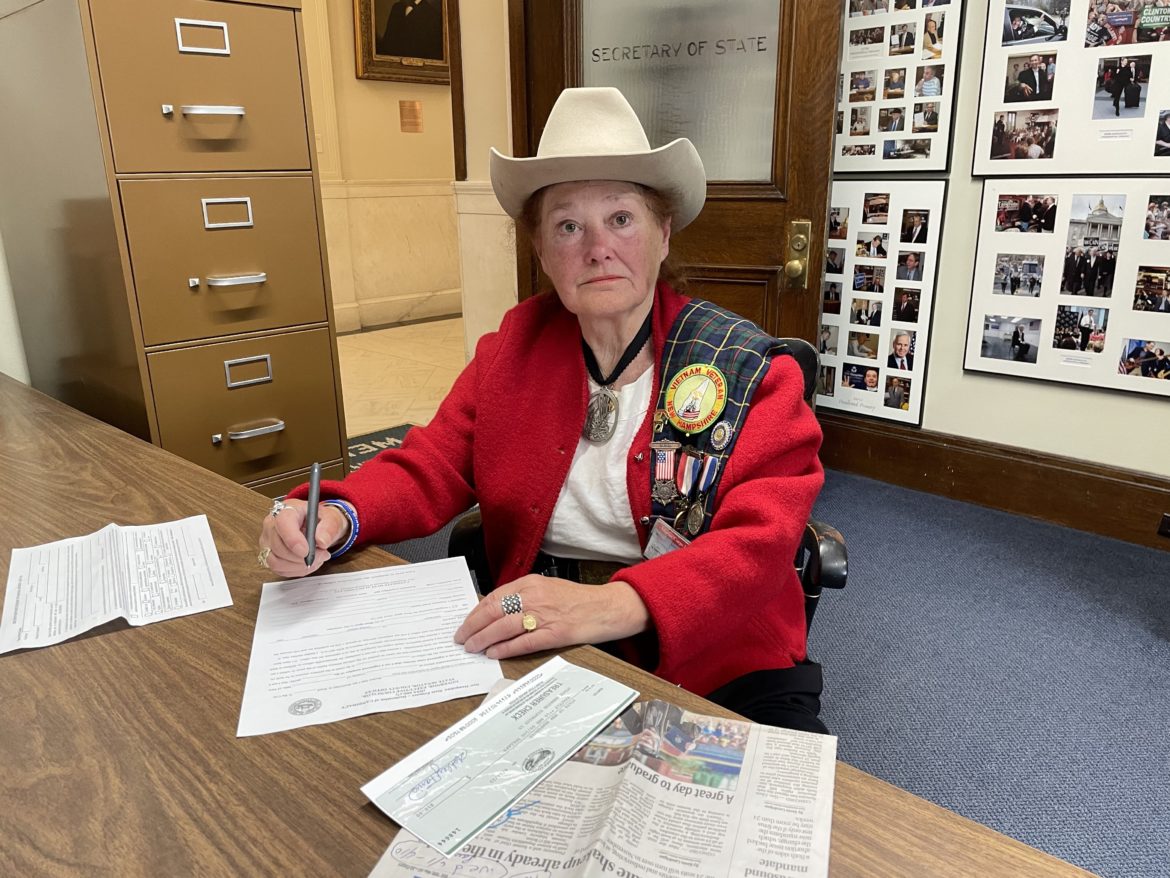 The Secretary of State's Office has been busy with candidates filing for office. Republican Linda Rae Banfill of Concord is pictured Friday signing up to run for state Senate.

CONCORD — Republicans are lining up to challenge Democrats in the three federal races, but also to take on three-term Republican Gov. Chris Sununu of Newfields.

The governor, who filed Friday to seek his fourth term in the corner office, faces challenges from five members of his party.

Karen Testerman of Franklin is challenging Sununu for the second time, running unsuccessfully against him two years ago. Testerman has run for a number of positions over the years, including U.S Senator and President.

Democratic state Sen. Thomas Sherman is unopposed for the Democratic nod in the governor’s race. The Rye doctor served in both the state Senate and House of Representatives before running for governor.

The longest list of candidates running for an office is for the Republican nomination to take on incumbent US Sen. Maggie Hassan of Newfields who faces only Paul J. Krautmann of Keene for the Democratic nomination.

The three candidates who have raised significant money for the Republican race are State Senate President Chuck Morse of Salem, Kevin H. Smith of Londonderry and Retired Gen. Donald Bolduc of Stratham.

Bolduc ran for the Republican nomination for the US Senate two years ago against incumbent US Sen. Jeanne Shaheen, but did not win the primary.

Smith, the former Londonderry town manager, has also run for state office in the past, and Morse sought a seat of the Executive Council before returning to the state Senate.

Cyber currency entrepreneur Vikram Mansharamani of Lincoln arrived at the State House in a tractor trailer cab to file.

Also running for the Republican nomination for US Senate are Gerard Beloin of Colebrook, John Berman, with a mailing address of Richland, Wash., Bruce Fenton of Durham, Dennis Lamare of Lee, who has run for office before, Michael P. Keating of Campton, Edmond Laplant, Jr. of Richmond, former US Senate candidate Andy Martin of Manchester, and Tejasinha Sivalingam of Ashland.

A field almost as large — nine candidates — has filed to challenge 1st District Congressman Chris Pappas who is seeking his third term in the US House.

He lost to Pappas two years ago.

Another former Trump administration official, Karoline Leavitt of Hampton, is also seeking the nomination along with former executive councilor Russell Prescott of Kingston, and former television newswoman Gail Huff Brown Rye, who is married to former Massachusetts US Sen. Scott Brown, as well as state Rep. Tim Baxter of Seabrook, and another former candidate for state office Tom Alciere of Hudson.

Others seeking the nomination to the first district are Mark Kilbane of Exeter, Mary Maxwell of Concord, Kevin R. Rondeau of Manchester, and Gilead R. Towne of Salem.

Keene Mayor George Hansel is the most familiar name along with Robert Burns of Pembroke who ran for the Executive Council several times.

Also seeking the GOP nomination are Scott Black of Whitefield, Michael Callis of Conway, Jay Mercer of Nashua, Dean A. Poirier of Concord, and Lily Tang Williams of Weare.

Kuster is running unopposed for the Democratic nomination for her sixth term in Congress.

There are some primary races for the five Executive Council seats.

The only Democratic primary is for the District 2 seat, which is almost guaranteed to be held by a Democrat between incumbent Cinde Warmington of Concord, seeking her second term.

She is being challenged by former District 1 councilor Michael J. Cryans of Hanover, who is now in District 2 after the political boundaries were changed this year, and Bradford P. Todd of Keene.

For the Republicans who hold a four-to-one majority in the current council, there are three primaries.

In District 4, incumbent Ted Gatsas of Manchester will face Terese Grinnell of Loudon.

And in District 5, incumbent David Wheeler of Milford, will face Anne Copp of Nashua.

Incumbents Joe Kenney of Wakefield in District 1 and Janet Stevens of Rye in District 3 are unopposed.

The primary is Sept. 13 and the general election Nov. 8.

The filing period closed at 5 p.m. Friday after opening June 1.

The political parties may file candidates for open seats, but individual candidates may not file after Friday.