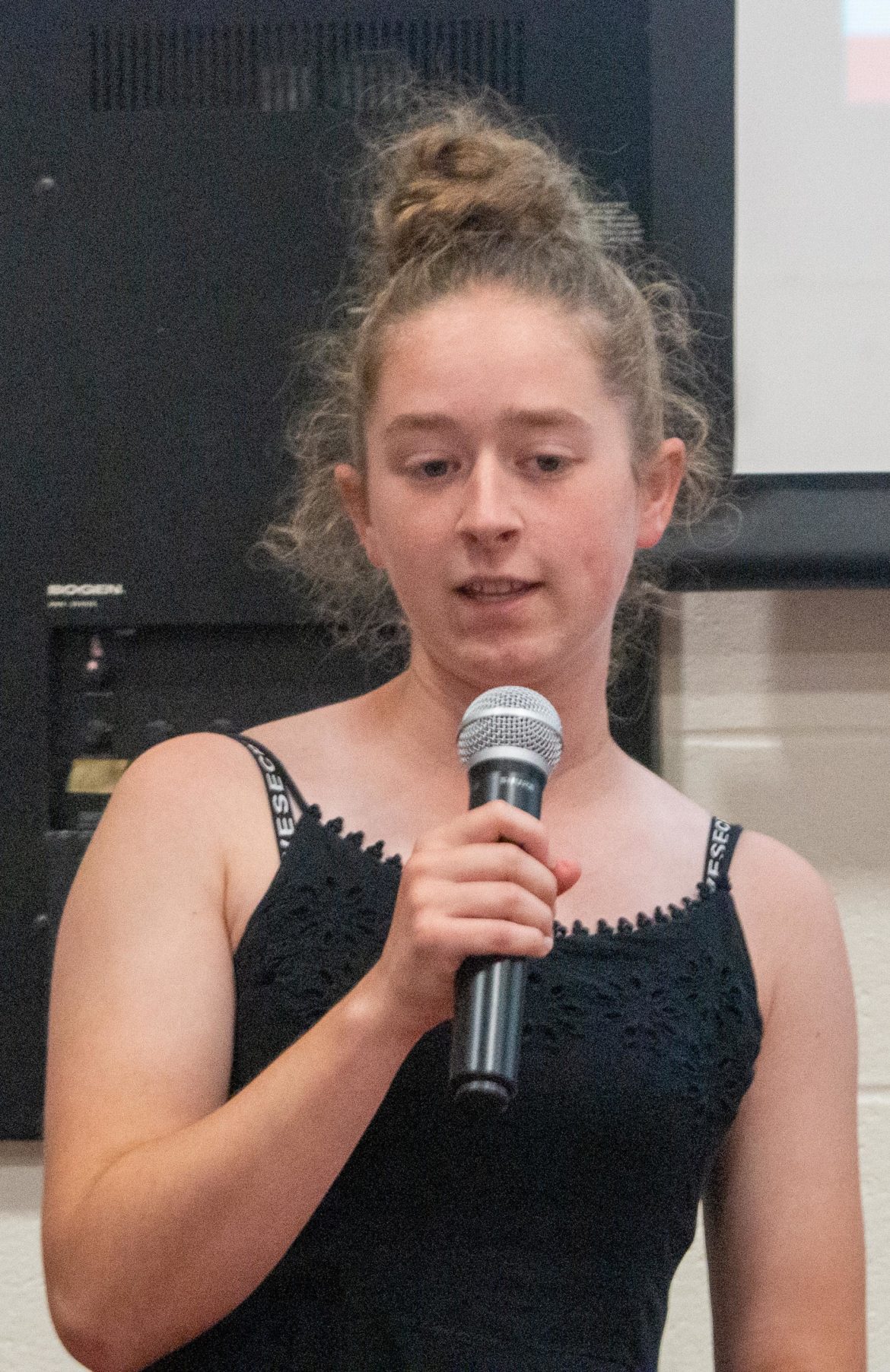 Cate McDonald was one of the Belmont High School students who persuaded the Shaker Regional School District’s board that it’s time to ditch the Indian mascot.

When Cate McDonald came home from Belmont High School with an award, she was proud but there was a problem.
Her plaque had the image of the school’s “Red Raider” mascot, a savage-looking profile of a Native American that Cate had come to find offensive.  So, the Canterbury resident covered the image with one of a badger and hung it on the wall.

McDonald was one of the Belmont High School students who persuaded the Shaker Regional School District’s board that it’s time to ditch the Indian mascot.

After hearing from McDonald and Baidyn Lewis, another student leader, three local leaders in the Native American community, and several Belmont and Canterbury residents, the Shaker School Board voted four to two on June 7 that it’s time for a new school mascot.

Now, students will work with school administrators to design a new image to go with the old name.  Leading the popularity contest so far is a pirate theme.  But there’s also support for a badger.

Michael Tursi, Superintendent of the regional school district made up of Belmont and Canterbury, sent an email to community members on May 31 informing them that the school board had voted in May to retain the name “Red Raiders” but was willing to consider a new mascot.  “The Board will be voting on changing the mascot image, replacing the current Native American image with a raider related image,” he wrote, inviting anyone who was interested to attend the June 7 meeting.

At the meeting, held in the gym at Canterbury Elementary School, McDonald told the board the existing mascot no longer serves the school’s interest in unity and representation.   The process of coming up with a new logo began, she said, when the student council decided they could not use the current mascot to decorate items for a fundraiser.  “No matter your opinion on the current mascot, it’s really hard to have a unified school with the current mascot that we have because it’s so divisive,” she said.

A student-led effort to get rid of the mascot had failed in 2014.  But by 2022, the mood of the community has changed.

As McDonald explained, members of a student leadership group called BRASS (Belmont Representatives Advocating for Student Success) “talked to everyone,” circulated a survey, developed options for a new image, and held an all-school assembly before coming to the School Board with their proposal.

Baidyn Lewis, a BRASS member from Canterbury, told the board that 59.4% of students liked the idea of replacing the old mascot with a pirate, while 25.2% prefer a badger.  In case you’re puzzled, William Badger was a 19th century Belmont industrialist who became governor, the only governor (so far) from Belmont.  There are no badgers in New Hampshire, nor are they red, but they are raiders, the students told me after the meeting.

Lewis, however, favors the pirate theme.

The controversy over Indian mascots is not a new one.  Professional teams, colleges, and high schools throughout the country have been gradually doing away with them due to beliefs they are based on and promote negative stereotypes of the nation’s first residents.   The National Congress of American Indians, which calls itself the nation’s oldest, largest, and most representative American Indian and Alaska Native advocacy organization, launched a campaign in 1968 to address stereotypes of Native people in popular culture, media, and sports.  Dartmouth College was one of the first institutions to respond by changing its team names from “Indians” to the “Big Green” the following year.  The 2020 decision of the Washington DC professional football team to abandon its racist team name followed a campaign backed by 30 national Native American organizations.

Denise and Paul Pouliot, the Head Female and Head Male Speakers of the Cowasuck Band of the Abenaki People, attended the June 7 meeting and urged the board to listen to the students.   Other districts are still clinging to names like “Red Raiders” with an indigenous face, Paul Pouliot said.  “When you take the indigenous face out, when you take the word Indian out, you’re at liberty to make it a badger or something else,” he advised, adding there’s no reason for a logo to include violent symbols like swords, arrows, or AK-47s.  “Sports is aggressive enough,” he said.

Several Belmont and Canterbury residents, me among them, spoke briefly in favor of changing the mascot.  Taylor Becker, who led the failed student effort eight years ago, said, “As a student I was disappointed last time and hope that this time the students are treated with more respect.”

No one testified in favor of keeping the current mascot.

“The vote tonight is around whether to change the image, not what the image should be,” Chair Michelle Lewis said when members of the public had spoken.  After a voice vote, which she declared was four to two, Lewis declared the motion had carried.

Sean Embree, the board’s former chairman and a longtime member, was in the minority.  The current image isn’t even getting used any more, he said, alluding to the big letter “B” that now appears on the school’s website in place of the Indian head.  “I want to be able to put it on the gymnasium floor, on the wall,” he said. “Red Raiders with a Native American image is racist,” he said after the vote.  “It just is.”  But he wasn’t ready yet to vote for a change.

After the vote, nearly the entire audience trooped into the school lobby while the board went on with its agenda.  Matthew Finch, the principal, clustered with students then took them into an office for a more private discussion.  After about 20 minutes they emerged with a plan to solicit ideas for a new image from the students.

“The student body majority wants to do pirates, but there was also another group that wants to do badgers,” said Cate McDonald, “so, we’ll keep options open. And hopefully we’ll get a really cool image.”

Kimberly McWhinney, VP of the junior class, is with McDonald in the badger camp.  “I just think that I have a lot of family that goes to the school,” she said. “My great grandparents have been in Belmont their entire lives. And so, I feel like my future generations, as in my kids, or my brothers, or my younger siblings, besides my brother, are coming up into the high school, and I’d like them to not have this mascot. I want them to be able to wear it for sports that they play, and I want them to be proud of it.”

“I’d like school spirit to be higher in the future,” she added.

Perhaps she’ll be the next governor from Belmont.