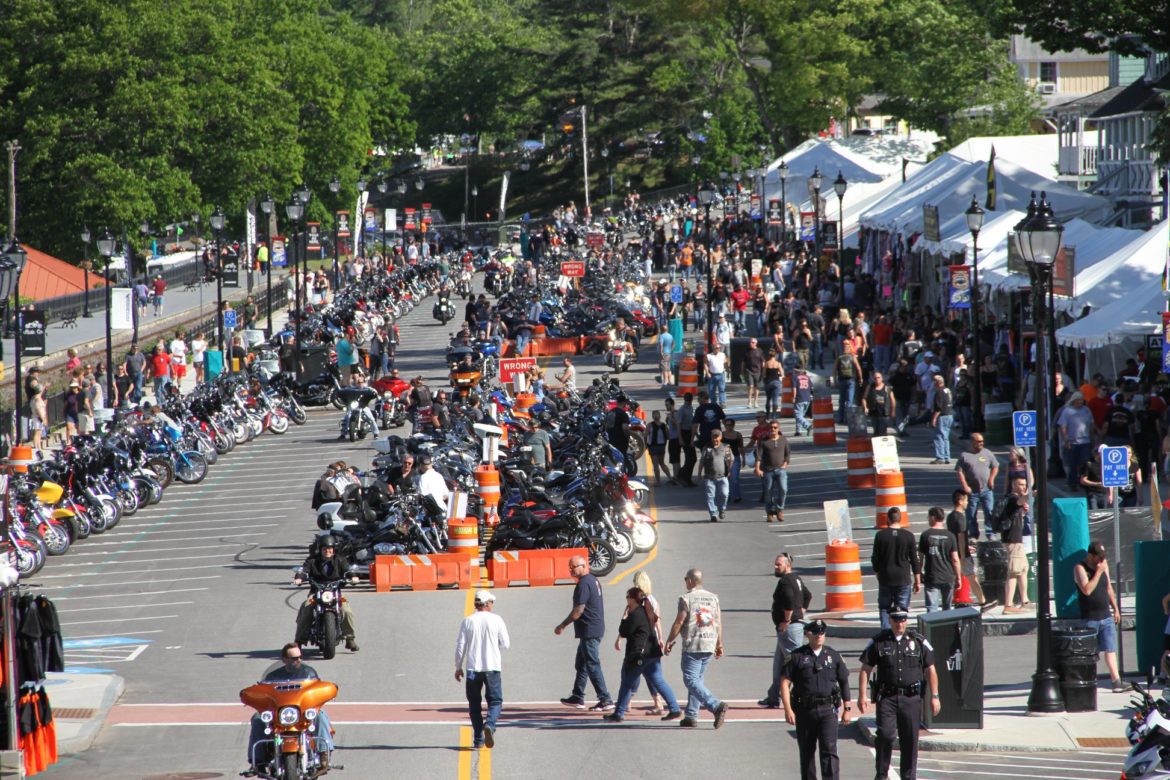 LACONIA – The state is expected to see thousands of motorcycles roll into the state for the 99th running of Laconia Bike Week starting this weekend.

The nine-day event starts this weekend from June 11 to June 19.
On Lakeside Avenue in the Weirs Beach section of the city, vendor tents were being set up Tuesday afternoon as the city put its final touches on the plans for hosting the event.

“I think there is a lot of pent-up excitement and demand for this year’s event,” said Laconia City Manager Scott Myers who is working on his 11th rally.
He said he expects large crowds to come and noted he did not think high gas prices would keep folks away.

“You get a lot more miles per gallon,” on a motorcycle, he noted.

Myers said the city will host a kick-off reception for the media at the newly renovated Colonial Theater in downtown Laconia on Thursday at 11 a.m.

During the pandemic, scaled-back versions of the gathering were held, and that had an impact on the city’s bottom line.

He explained that the city has hard costs for labor and materials for the event and raise almost all of the $150,000 line item through vendor licenses and fees.

With fewer vendors during the pandemic, the city got less revenue.

This year, he said there have been plenty of vendors willing to come and though they had to increase the fees slightly due to inflation, he said he thinks the event will hopefully allow for the city to break even.
Already this week, many of the local hotels in the Weirs had “no vacancy” signs hanging, while restaurants were gearing up staff and food and hoping to get a head start on the summer tourist season with the rally.

In recent years, the rally has been a pretty sleepy event by criminal standards, a far cry from the 1990s when arrests were counted in the hundreds. Fatal accidents have also marred the event in years past.

But clashes among outlaw motorcycle groups similar to one in Concord on Main Street two months ago in front of the State House – where a firearm was discharged and bikers exchanged blows in the middle of the street – get statewide attention.

Myers said the city is partnering with other law enforcement officials who “share information. We take it seriously,” he said, declining to go into detail on any threats to the event or biker gang issues.

Concord Patch reported that a statewide “be on the lookout” was issued for members of a motorcycle group called the Knights of Sin Motorcycle Club after the incident in Concord and a spokesman for the Concord police department said the fight coincided with an annual motorcycle and parts swap at the Everett Arena in Concord.
Biker gangs are considered a very small minority of the riding public.

The event is a lot more about riders coming together, touring the state, and enjoying each other’s company.

Myers said some of the vendors who have liquor licenses have expanded their tent areas on their own property this year and the state Liquor Commission is involved.

On Lakeside Avenue Tuesday, the street that will be filled with motorcycles this weekend was instead filled with large trucks unloading T-shirts and biker merchandise.

Inside one of the many white tents facing out toward Lake Winnipesaukee were John Rivera and Gabriel Carrasco of Orlando, Florida, who are working for Motorcycle Rally USA.
They said they were just finishing the unloading and displaying of their merchandise which they started unpacking on Monday.

Myers said the city expects the crowds will be even larger next June 10-18 when the rally celebrates its 100th.

It is considered the longest-running bike rally in the nation.

There are many events throughout the state aimed to get the kickstands down to explore and spend some money.
This year, for example, Makris Lobster & Steak House at 364 Sheep Davis Road on the Concord/Loudon line plan a street bike stunt show with music, food, and promotional competition for bikers on June 11 and June 12 from 2 to 11 p.m.

The Northeast Motorsports Museum at the New Hampshire International Speedway at 1122 New Hampshire Route 106 in Loudon will be open with displays for both the first and second weekend of the rally and there will be live music planned each day in the Weirs Beach section of Laconia at the Naswa, Tower Hill Tavern and the Looney Bin.

A motorcycle race is planned at New Hampshire International Speedway.
The events are listed here: https://laconiamcweek.com/schedule-of-events/