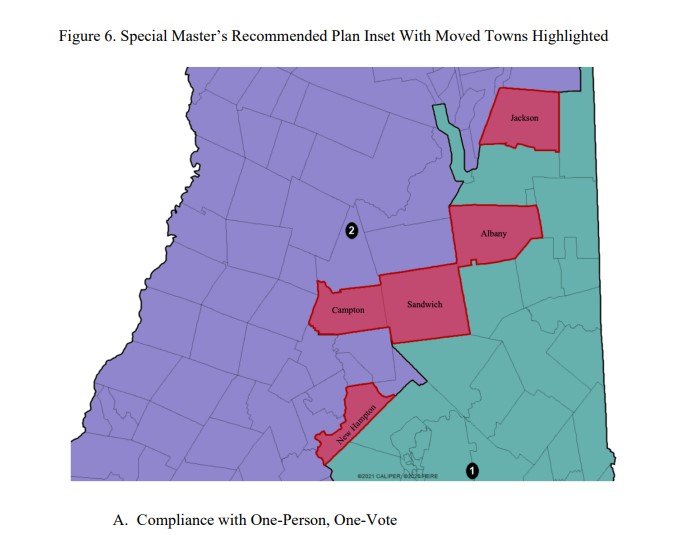 CONCORD — After hearing from attorneys Tuesday morning, the state Supreme Court took little time to adopt the congressional map proposed by its special master that moved only five towns.

The legislature and Gov. Chris Sununu have been unable to agree on a plan for the state’s two congressional districts, as the governor vetoed two bills with different plans last week.

With no congressional map for the two districts and the filing period for candidates opening the next day, the Supreme Court said it would approve the plan developed by Special Master Stanford law professor Nathaniel Presily.

“Having considered each of the proposed plans, written submissions, and oral arguments, the court hereby adopts as the congressional district plan for New Hampshire the plan recommended by the special master as depicted and described in exhibits 1 and 4 of the Report and Plan of the Special Master,” wrote Chief Justice Gordon MacDonald for all five justices.

“The plan fully complies with our May 12 opinion and with the ‘least change’ approach and other criteria set forth in our May 12 order appointing the special master.”

Once the documents and the court’s order are filed with the Secretary of State’s Office by June 1, the plan will take effect, he wrote.

“Unless otherwise ordered by the court, the filing of any motion to reconsider shall not stay the effectiveness of the congressional district plan,” MacDonald wrote.

Earlier in the day, the court was urged to adopt the congressional district map drawn by the special master Tuesday by those who sued over the redrawing of the districts’ political boundaries.

With the legislature and Gov. Chris Sununu unable to agree on new political boundaries for the state’s two congressional districts, the “unwelcome task” falls to the Supreme Court, said attorney John Devaney representing the plaintiffs.

He urged the court to act that day so the districts would be set when the filing period for federal, state and county offices opens Wednesday.

It would be prudent to comply with the filing period as currently scheduled for June 1 to June 10, he said.

“New Hampshire is the only state in the country without a Congressional map,” Devaney said, “so you need to adopt one so the candidates can begin filing tomorrow.”

Justice James Bassett asked if there was any indication the Secretary of State would extend the filing period, and Devaney said he was not aware that he would, but noted he said as long as the congressional districts are set by June 6 the filing period would not have to be changed.

Devaney praised the work of Persily, saying his proposed plan moving five towns consisting of 8,973 people from the first to the second district meets all federal and state requirements as well as the criteria established by the Supreme Court in its order.

The difference in population between the two districts is one person, Devaney noted, which is the lowest deviation possible.

Noting that court-drawn plans have a higher bar than those adopted legislatively, he said, the special master’s plan meets the most important criteria of one person, one vote.

Bassett noted the special master said the deviations in several of the proposed plans were statistically the same.

Devaney said the plaintiffs have said one of the Republican proposed plans, the Democrats’ proposed plan and the special master’s plan are all acceptable.

He said the plan also complies with the court’s mandate that the districts largely remain the same and move the smallest number of people possible.

And he said as the special master noted in his report, his plan does not consider political data or partisan factors which the maps approved by the legislature do.

“The special master has done a terrific job in adherence to the constitutions and criteria established by this court,” Devaney said, “and I urge you to adopt the special master’s plan and do so today so the filing period can begin June 1.”

Attorneys for the House Speaker and Senate President said they take no position on the different maps, but both argued earlier they preferred to retain the current districts rather than have the court draw new maps, saying redistricting should be the purview of the legislature according to the state constitution.

Sean List, attorney for House Speaker Sherman Packard, said while the General Court passed two bills establishing the congressional districts, “it is pretty clear the governor defers to the court and we’ll be back at it next session.”

The governor issued a veto message on the two bills, List said, and “it is fair to say it is highly unlikely either bill would garner enough support to override the vetoes.”
He said he does not believe it is necessary for the court to wait before adopting a plan.

Richard Lehmann, representing Senate President Chuck Morse, noted the vetoed bill, Senate Bill 200, has not made it back to the Senate as the official process requires, but he was not predicting it was not going to happen.

He said the only plan they would oppose is the one from the Democrats that would move Hampstead from District One to District Two, because it moves too many people.

“Our position was laid out several weeks ago,” Lehmann said, “but you laid out an order, we understand the order.”

Chief Justice MacDonald questioned Secretary of State’s attorney Myles Matteson about any plans to change the filing period and if other positions up for election would be affected if the court waited several days to issue an order.

Matteson said the secretary of state does not believe any changes are needed to the filing period, but if there is no congressional map at the beginning of next week, he might have to extend the filing period.

But does it affect other positions, Bassett asked Matteson, who said “the preference is not to have to change (the filing period) for congressional candidates.”

“The sooner the better,” MacDonald probed.

“Yes,” Matteson said. “The Secretary of State looks to administer an orderly election.”
MacDonald said the court would issue an order as soon as possible.

The suit was originally filed in Hillsborough County Superior Court South and claimed the legislature is at an impasse with the Governor threatening to veto the plan approved by the House and Senate that made major changes in the two districts. Under the plan, 35 percent or more than 340,000 voters moved from one district to the other.

The five voters filing the suit, including former House Speaker Teri Norelli, argue the districts will not be finalized when the candidate filing period with the Secretary of State’s Office opens in June. Secretary of State David Scanlan is the defendant in the suit.

The state Supreme Court took supervisory jurisdiction over the case from the Superior Court saying the issue needs to be resolved quickly so the dates of the filing period do not have to be changed. The filing period for candidates runs from June 1 to June 10.

The court waited until the governor and legislature failed to agree on any plan before releasing the special master’s report last week.

A similar group of Democratic voters have also filed suit over the legislatively approved redrawing of the state Senate and Executive Council districts in Hillsborough County Superior Court South.

The voters also seek an injunction to block the use of the new districts, which they claim have been gerrymandered to favor Republicans.

That case is still pending.

After the ruling on the Congressional map, Sen. Jim Gray, R-Rochester, chairman of the Election Law and Municipal Affairs Committee, issued the following statement:

“Unfortunately, the governor vetoed the redistricting bills passed by the legislature.  As a result, the Court has stepped in with its own congressional maps. The plan developed by the special master hired by the Court recognizes the federal one man-one vote requirement and complies with the other requirements found in our state constitution.

“These are the same standards that were used to create the redistricting maps developed by the General Court this legislative session. While we’re now able to go forward with the candidate sign-up period and fall elections, redistricting remains a legislative process that is best done by those who are elected by and accountable to the people of New Hampshire,” Gray said.

“The Congressional map adopted by the NH Supreme Court today reflects the same ‘least change’ approach that House Democrats advocated for throughout the redistricting process.  If the GOP majority had simply been willing to work with Democrats, we could have had this map signed into law months ago without any Court involvement.

“Every taxpayer dollar that was spent on this case is a direct result of the Republican Party’s inability to put partisanship aside and redistrict in a fair manner.  While many Granite Staters are struggling to make ends meet, the GOP is shamefully wasting your tax dollars in pursuit of rigged districts to benefit themselves. I thank the Court for its timely response to this case which assures that districts are in place prior to the candidate filing period and that the fundamental voting rights of Granite Staters are protected,” Cote said.