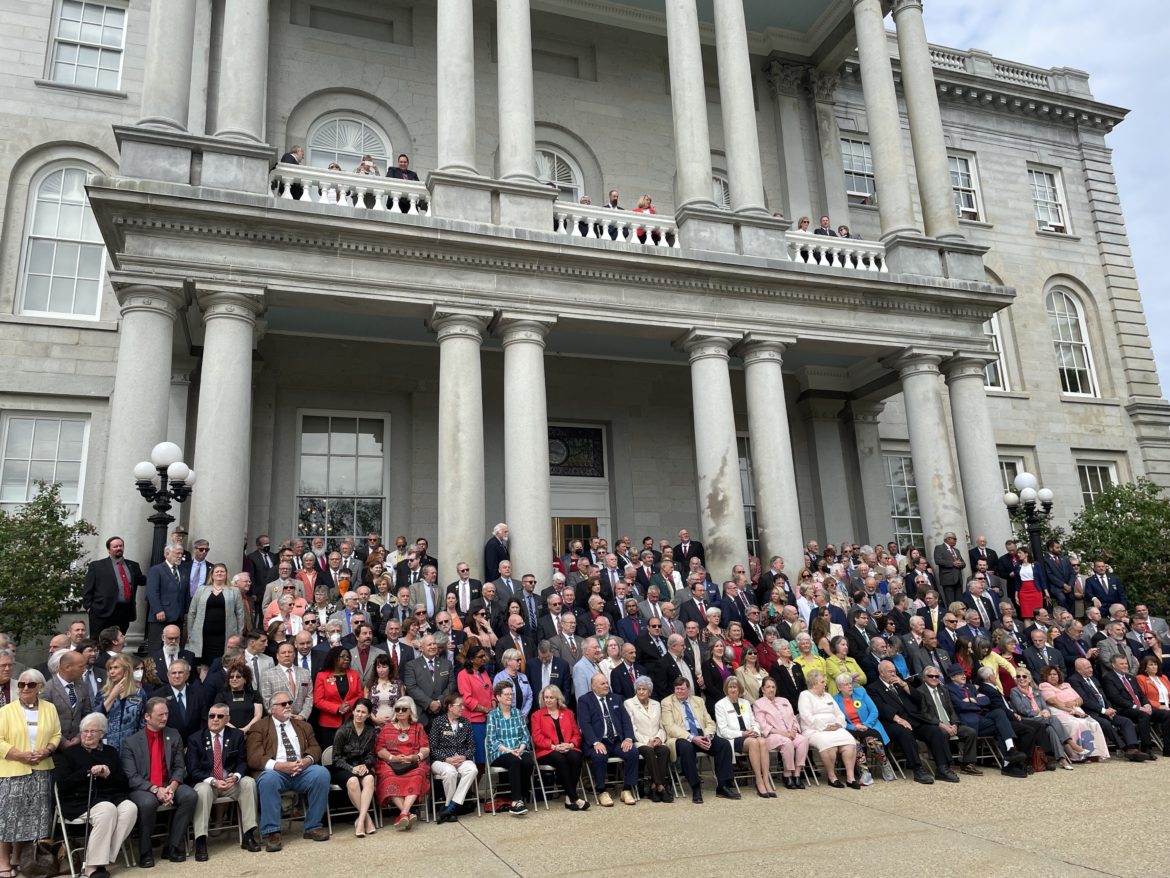 The 400-member House had a "class picture" taken on the State House steps before acting on bills on their final day Thursday.

CONCORD – The Republican-backed parental bill of rights was killed in the House of Representatives Thursday by just five votes with opponents saying the bill would force schools to “out” gay students to their parents.
Proponents said the bill would allow there to be no secrets between educators and parents and would repair some of the recent damage between them.

The vote came on the last day of the legislative session which also led to the passage of a Republican-backed redistricting map for the state’s Congressional districts, which Gov. Chris Sununu immediately said he will veto.

That leaves the final map in the hands of the state Supreme Court that appointed a special master to recommend a redistricting plan should there be no legislative plan in place by today.

Sununu, a Republican, had threatened to veto the parental rights bill and officials from the Attorney General’s office told legislators that if made law, it might be in conflict with a recent state law that bans discrimination.

Opponents said that House Bill 1431 would “out” a child to their parents before they were ready to have such a discussion about their sexual identity, even if they inadvertently mentioned it to school officials.

Proponents said nowhere in the bill does it say that a teacher needs to reveal that information to the parents, only if they asked to be addressed by another gender or joined any school club.

State Rep. Sue Mullen, D-Bedford, said she believes in parents’ rights but this bill “is about a lack of trust that robs kids of the opportunity to engage with other adults at a time when they need them the most.”

She said she spent 12 years as a fifth-grade teacher and worked 27 years as a school counselor. Some students disclosed to her they were being sexually abused. Some disclosed their suicidal thoughts.
Mullen said being LGBTQ is one of the leading reasons for teen homelessness in America.
Forcing school personnel to “out” students is “gambling with kids.”

State Rep. Jim Kofalt, R-Wilton, supported the bill.
He said the bill affirms the primacy of parents to raise healthy and productive adults, “not junior partners in the process,” referring to educators.
He said it would be a step in restoring trust in schools.
“Do we trust parents?” he said, “That is the fundamental question.”

The bill would have also given or reasserted the rights of parents to inspect curriculum, see report cards, and have control over vaccines.
Kofalt said only one reference to gender expression was in the bill “but it seems to put the bill in its entirety at risk.”
In a statement after the vote, House Majority Leader Jason Osborne, R-Auburn, said: “It is unfortunate that the members of the House were swayed by scare tactics and false information.

“Opponents of this bill have said that this bill would give parents the final word on their child’s health, education, and welfare. I fail to see how this is dangerous. That is the basic job of being a parent.”

CONGRESSIONAL REDISTRICTING TO BE VETOED
Though the Republican-favored redistricting map for the state’s two congressional districts passed both the House and Senate along partisan lines Thursday, Sununu issued a message immediately after saying he would veto it.

“The citizens of New Hampshire will not accept this map, which moves both members of Congress into the same district. Our races have to be fair, which is why I will veto this map,” Sununu said.

Rep. Ross Berry, R-Manchester, said: “It would now appear that the Governor’s intent is to have maps resolved by the court, and it could be reasoned that this was his position all along. This is his prerogative, and it is unfortunate because this process does not convey a sense of working together in good faith. He will now be solely responsible for circumventing the people’s elected representatives and sending this process to bureaucrats appointed by unelected courts who are not accountable to the people.”

BUSINESS TAX RELIEF
The House and Senate also approved a reduction in business taxes through the passage of an amended House Bill 1221.

House Majority Whip Rep. Jeanine Notter, R-Merrimack, said “one of the main objectives of the legislature has been to lower business taxes and protect our economy. Since we reduced and reformed our corporate taxes in prior years, our economy has flourished. As small businesses in our state continue to rebound from the effects of the pandemic, lowering taxes helps put them on the path to not only rebound but to grow and create jobs. I am proud to have sponsored this legislation, and I look forward to seeing this bill becoming law.”
It includes a one-time version of the late House Democratic Leader Renny Cushing’s Property Tax Relief Act of 2022.

House Democratic Leader Rep. David E. Cote, D-Nashua released the following statement after the vote:
“I am incredibly proud that Leader Cushing’s property tax relief legislation is on its way to the governor’s desk.  Properly funding our municipalities and cutting property taxes is a top priority of House Democrats and while this bill only provides one-time relief, it is a step in the right direction.

“House Democrats do not believe that Granite Staters, many of whom are struggling to make ends meet, should be forced to line up behind big businesses and hope that the government has enough money to provide tax relief.  While passage of HB 1221 will benefit our constituents next year, House Democrats will continue to make Granite State families and communities our top priority,” Cote said.

OMNIBUS BILL INCLUDING 29 ISSUES, LEGISLATIVE PARKING GARAGE
Passed by both bodies was House Bill 1661, including 29 matters left over from other bills, including technical career education changes and about $9.5 million for preliminary work to build a new legislative parking garage.

The money is only a start to tearing down the current Department of Justice building and moving the office down near the prison in Concord.

“I am extremely grateful to my Senate colleagues for their bipartisan support of this essential language addressing our affordable housing crisis. We must give cities and towns every tool we can in this fight – and the pieces of the bill that passed are meaningful, including improved training for local land use boards, required findings by ZBAs, increased municipal powers for residential development, and timelines for clarity  for all parties. While there is still a significant amount of work to be done, the passage of this language was a key first step toward building a strong, modern economy.”