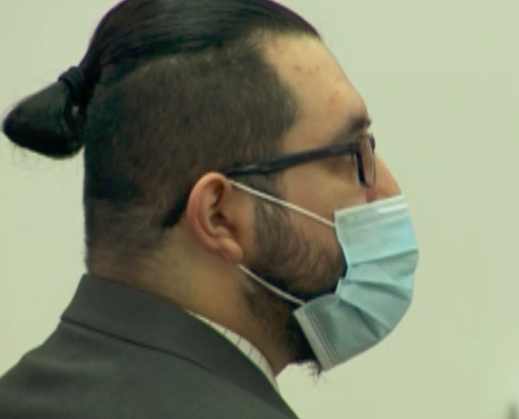 KEENE — The jury in the Armando Barron murder case found him guilty Thursday after deliberating for just four hours in Cheshire Superior Court.

They had listened to days of grisly testimony and evidence of the murder and decapitation of Jonathan Amerault of Keene.

Armando Barron, 32, is convicted of luring Amerault, 25, to Annett Wayside Park in Rindge and then beating and stomping him before shooting him three times. Barron then forced his wife, Britany Barron, 33, to drive four hours to a remote camping site in Coos County where he commanded her to cut the head off Amerault, prosecutors said.

Defense attorney Meredith Lugo used her closing argument Thursday to suggest Britany Barron murdered Amerault and then lied about it in a bid to stay out of jail. Armando Barron admitted at the start of the trial that he brutally beat both his wife and Amerault but denied the killing.

“You the jury get to decide what the truth is at this trial,” Lugo said. “Britany doesn’t just have any reason not to tell the truth, she has the strongest reason a person can have; avoiding the consequences of her own actions.”

Lugo suggested Britany Barron lied about her role in the killing and that she fired the fatal shot at close range into Amerault’s head. Lugo said forensic evidence shows that this shot was fired at close range, as soot and gunpowder were found in the wound.

Britany Barron testified that her husband shot Amerault from the front seat of Amerault’s car while Amerault was in the back.

“You don’t have to accept what she says as the truth,” Lugo said. “Ask yourself if you can trust Britany beyond a reasonable doubt.”

Lugo did not provide any motive for Britany Barron to kill Amerault. According to the state, Armando Barron beat and strangled Britany on Sept. 19, 2020, after finding her romantic Snapchat messages with Amerault, a co-worker at Jaffrey Teleflex. Armando Barron then carried out the torture and murder of Amerault after using his wife’s phone to lure him to the secluded park, according to prosecutors.

Senior Assistant Attorney General Benjamin Agati said Britany Barron’s testimony is backed by all the evidence brought before the jury.

Either move would have brought him closer to Armando Barron in the front seat.

“Jonathan died trying to save himself,” Agati said.

Agati told the jury there is no doubt that Armando Barron committed the murder. He told his wife she was going to die that night after he beat her in their Jaffrey home, choking her to unconsciousness as he repeatedly shoved a loaded gun into her mouth.

Then, Armando drove her to the park in Rindge, beating her and breaking her nose as he read her texts with Amerault.

“Three people went into the woods that night, the one who admitted that he beat and bloodied and broke Britany’s bones, the one who shot and killed just like he said he would. Jonathan and Britany were with that man,” Agati said.

“This was, as the defense told you in the opening, a brutal horrific death. One that was not justified in any way, shape or form,” Agati said.