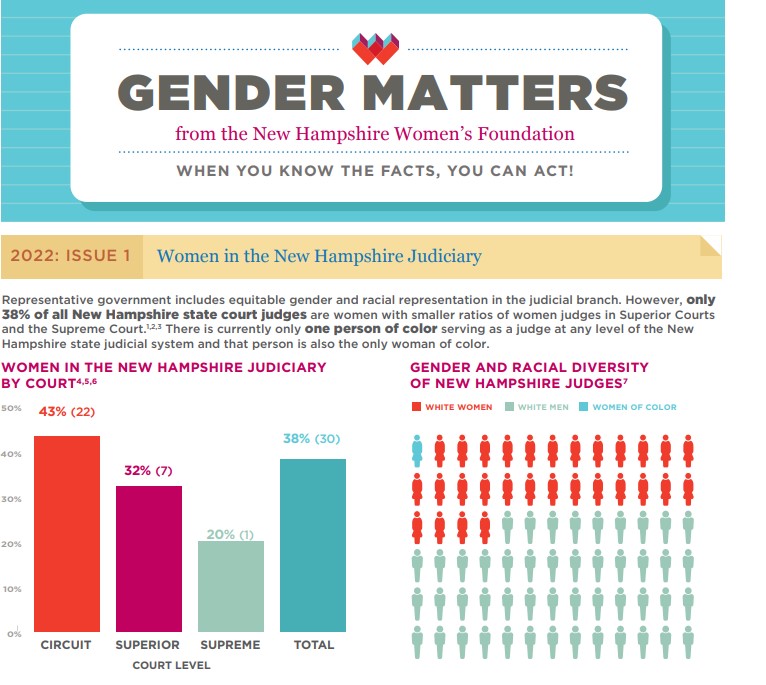 This is according to a 2022 NH Women’s Foundation study and the focus of an event on June 9 at 5 p.m. at UNH School of Law.

The study shows that 43 percent of circuit court judges are women, 32 percent of all Superior Court judges, and one of five Supreme Court justices is a woman.

The Foundation is making recommendations: calling on the governor to nominate more women and minorities to reflect the state’s population; that there be more women on the governor’s judicial selection commission; and that they publish gender/minority data, along with the New Hampshire Bar Association.

Gov. Chris Sununu was asked in an email to comment on those recommendations Wednesday but there was no immediate response to the inquiry.

Sununu, the study shows, has made 35 percent of his nominations women, compared to Maggie Hassan who had 48 percent.

But women in law, and even women in the state judiciary, is a relatively new thing.

Marilla Ricker was the first to pass the bar in New Hampshire in 1882 but she went to Washington, D.C., and later had to sue the state to allow women to practice law here.

Jean Burling was the first on the bench in New Hampshire in 1979.

In 2000, then-Gov. Jeanne Shaheen nominated Linda Dalianis to the Supreme Court and in 2010, then-Gov. John Lynch named her chief justice.

The state has a nine-member judicial selection commission, established by the Shaheen Administration when she was governor in 2000.

The way it works, the commission accepts all judicial applicants often before there is a vacancy, evaluates and makes a recommendation to the governor who then either declines or nominates candidates to the state’s five-member Executive Council, which holds public hearings before voting on all judicial candidates. They are then confirmed and sworn in.

Sometimes, as in recent history, the commission has given qualified recommendations with reservations about certain aspects of some candidacies and those are often vetted out during the public hearing process.

The number of women on the nine-member commission, currently, is three: Donna Sytek, Marcia Moran, and Lyn Schollett. More information about the commission can be found here.

The event on June 9 is sponsored by the New Hampshire Women’s Foundation, the NH Women’s Bar Association, and the Warren B. Rudman Center.