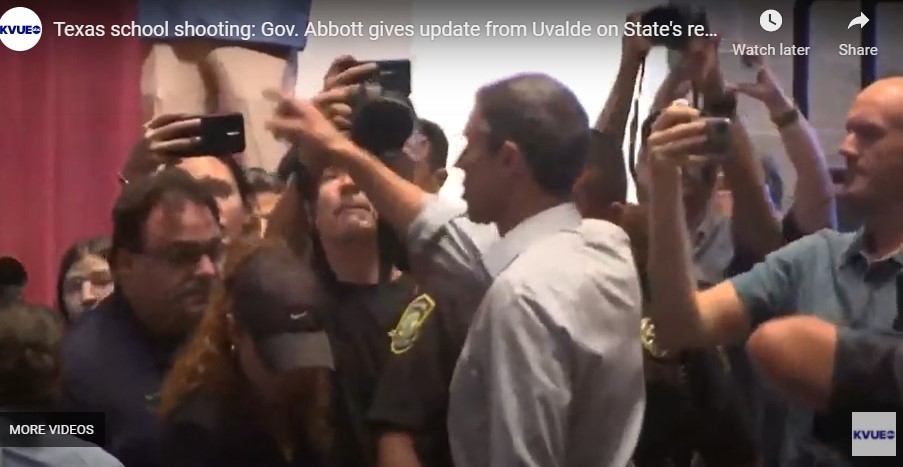 At a Wednesday press conference about Texas’ deadliest school shooting, Republican Gov. Greg Abbott was dramatically confronted by his Democratic opponent Beto O’Rourke, who yelled, “This on you.”

At a Wednesday press conference about Texas’ deadliest school shooting, Republican Gov. Greg Abbott was dramatically confronted by his Democratic opponent Beto O’Rourke, who yelled, “This on you.”

Sign up for The Brief, our daily newsletter that keeps readers up to speed on the most essential Texas news.

That confrontation about the two major candidates for governor in November came at the same press conference in which Abbott provided more details about the gunman’s activities before the shooter killed 19 students and two teachers at Robb Elementary in Uvalde on Tuesday.

Abbott also said at the press conference that he was unsure whether he would attend the National Rifle Association’s annual meeting in Houston this week.

“As far as future plans are concerned, listen, I’m living moment to moment right now,” he said when asked about the convention during the news conference.

A video of the press conference can be viewed above.

It is the eighth mass shooting in a Texas public space since an Army psychiatrist opened fire at Fort Hood Army base in November 2009, killing 13 people in what was later determined to be an act of religious extremism. Five years later, in April 2014, another Fort Hood soldier killed three people and wounded a dozen more on the base before he killed himself during a firefight with military police.
This article originally appeared in The Texas Tribune at https://www.texastribune.org/2022/05/25/greg-abbott-uvalde-school-shooting-press-conference/.

“Video: Greg Abbott and Beto O’Rourke clash over Uvalde deaths as governor provides more details on school shooting” was first published by The Texas Tribune, a nonprofit, nonpartisan media organization that informs Texans — and engages with them — about public policy, politics, government and statewide issues.

The Texas Tribune is a member-supported, nonpartisan newsroom informing and engaging Texans on state politics and policy. Learn more at texastribune.org.