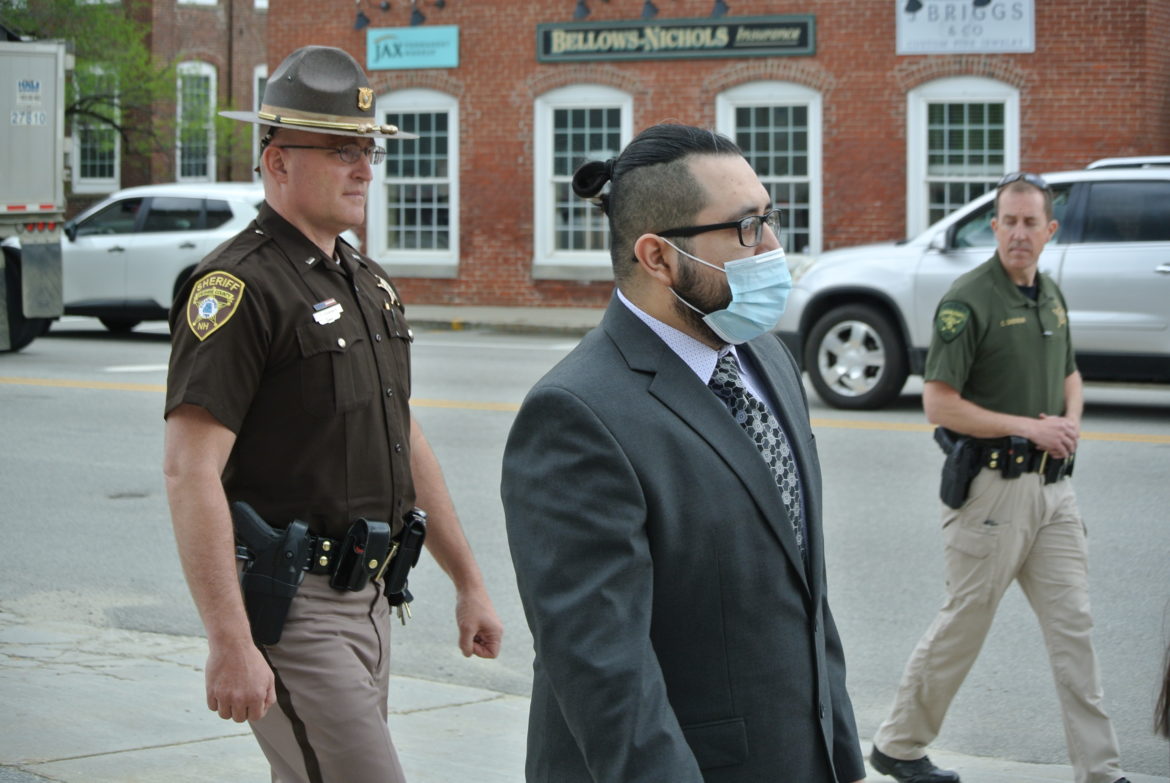 KEENE — Britany Barron told the jury after husband Armando Barron’s rampage left Jonathan Amerault dead, and after he forced her to drive hours north to one of the most remote parts of the state where he wanted her to cut up and hide the body, then he would be back with their daughters so she could say goodbye.

“He told me I needed to have Jonathan’s body buried by Tuesday afternoon, then he would bring the girls on Friday so I could give them a hug and a kiss and say goodbye to them. He said, ‘you know you’re not coming home with us, right,” Britany Barron testified this week.

Britany Barron is the key witness in the murder case against her husband. After she was terrorized and beaten by her husband on Sept. 19, 2020, she testified that she witnessed her husband lure Amerault to the secluded Annett Wayside Park in Rindge, saw him beat and torture Amerault, resisted three instances where Armando Barron tried to get her to kill Amerault, and then she watched as Armando Barron shot Amerault three times.

Her dramatic testimony lasted most of the day on Wednesday and she came back on Thursday morning for a cross-examination.

Defense attorney Meredith Lugo tried to puncture Britany Barron’s story by pointing out she was never charged in the murder herself. Britany Barron took a plea deal after being charged with destroying evidence in the case, though she had planned to go to trial arguing she acted out of duress. Armando Barron has a history of domestic violence against his wife, according to court records.

Armando Barron’s defense boils down to admitting that he beat and stomped Amerault, and that he beat his wife leaving her with a broken nose and covered in her own blood, but that he somehow drew the line at killing. He claims Britany Barron is the real murderer.

His defense has a difficult job given the evidence against Armando Barron, especially his wife’s testimony. If his attorneys probe Britany Barron too deeply, if they try to attack her credibility, then the state will be able to bring in evidence of his prior abuse, of his alleged infidelities, and his criminal record for deserting the United States Army.

Once she was done testifying on Thursday, the state started calling police detectives and introducing video evidence of Armando Barron’s purchases of cleaning supplies and other items used to hide Amerault’s car and body. When he was arrested by police days later, Armando Barron was driving a pickup truck with soil, powdered cement, and cement tools in the back.

By this point, Armando Barron knew that his ruse of having his wife call into work at Teleflex in Jaffrey, where she met Amerault, and telling human resources she was suddenly moving back to New Mexico did not work. Police had been in contact with him looking for his wife.

What Armando Barron did not know is that the remote camping site in the woods of Atkinson Gilmanton Academy Grant in Coos County where he left his wife stranded with the body was a bear hunting site. The hunters, who pay to use the area in the fall, were annoyed with Britany Barron for being there.

“We pay a lot of money to do what we do. No one’s supposed to be camping or having fires,” said Elmer Long Jr., one of the hunters who called New Hampshire Fish and Game to complain about Britany Barron’s camping.

Britany Barron had just finished wrapping Amerault’s headless body in a tarp and putting it into a nearby brook when the Fish and Game officers came to her camp on the morning on Tuesday, Sept. 23, 2020.

Britany Barron had been left with Amerault’s car, which was not drivable after her husband smashed it into the trees, and a cell phone that had no coverage. She had a .9 mm pistol in case she ran into bears.

“I’m in big trouble,” she told the officers.

Britany Barron tried to tell police she was camping after getting into a fight with a friend. She was taken to the Berlin Police Department where she talked with detectives, and she still did not tell them about what happened for a few hours. She testified it took a while for the shock of the murder and what she had been forced to do to ease a bit.

“I was definitely reluctant to come out and say what was going on,” she said.

But once she finally realized it was safe, she talked. Britany Barron offered to take a lie detector test, and to have her hand tested for gunpowder residue. She told police what happened and showed them where to find the evidence.

“At the end of the day I knew they’re going to find the evidence. I might as well tell them everything,” she said.

Not forgotten in the trial’s first week is Amerault. The young engineer who had been flirting with Britany Barron in the week before his murder. His mother, Justine Amerault, and his friend, Austin Zuercher, both testified how lonely Amerault was.

He was successful, and had many friends, but he longed to be in a relationship. The prospect of maybe finding love with Britany Barron made him happy, they both testified.

Armando Barron’s trial is set to resume Monday morning in the Cheshire Superior Court in Keene.