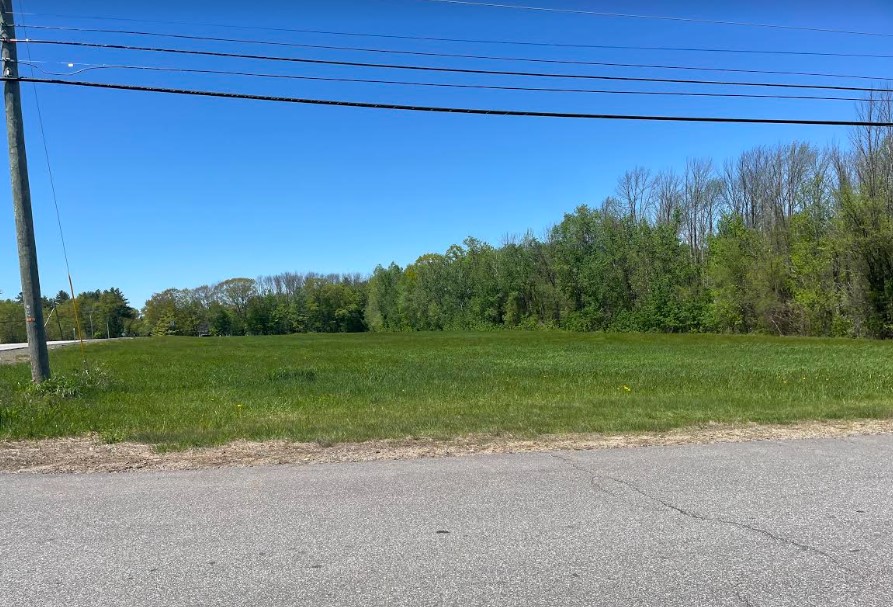 Field on Meredith Center Road at Lane Road which could be the home of the news $10 million state e-911 center.

LACONIA – A new $10 million emergency 9-1-1 facility may be built in Laconia on state land after the Executive Council and the City of Laconia came to an agreement about various parcels around the former Laconia State School property, Wednesday.

Commissioner of Safety Robert Quinn said the department has been able to identify a piece of land, a 10-acre hayfield at the corner of Meredith Center Road and Lane Road in Laconia and across the street from the Robbie Mills Sports Complex as the most suitable spot to relocate the agency’s emergency call needs and that for the Lakes Region Mutual Fire Aid dispatch center. Both are currently housed in the Dwinell Building at the former state school property, which is up for sale.

Quinn said the regional fire dispatch center, which provides services for 36 communities, is supported “as long as we can provide a state of the art replacement.”

He said and the location of this field is crucial for radio tower colocation and redundancy and there is already a needs assessment for the new center underway.

Gov. Chris Sununu said conversations are taking place to see if funds for such a center can come through federal American Rescue Plan Act grants or possibly using some of the state’s surplus funds.

Executive Councilor Joe Kenney of Wakefield, who represents Laconia, said he has spoken with Laconia City Manager Scott Myers and the city council is in agreement with the executive council’s vote, Wednesday. But he noted in an interview Tuesday evening that he would like to get some public opportunity to see any plan that might be developed for a new dispatch center.

“While the city council is supporting it, I want to make sure the public is,” Kenney said. “If everyone’s happy, I am happy.”

Developers are now eyeing the purchase of the core Lakes Region Facility property, more than 100 acres in size with large brick buildings now pretty much empty, except for the E 911 and regional fire dispatch.
The approved agreement means that the state could build and relocate the Laconia E-911 and Lakes Region Mutual Fire Aid dispatch facility off Meredith Center Road; the city, in turn, would get a similar-sized parcel of state land across from the facility at the corner of Old North Main Street and Route 106 (Parade Road) which now houses a water pump facility.

Separately, legislation is also in the works and has passed a committee of conference to allow for some of the proceeds of the proposed sale of the facility to be used to build such a dispatch center, if federal American Rescue Plan Act funds are not available for that use. But that would likely have to be repaid later as the state needs to build a new dispatch center.

Charlie Arlinghaus, commissioner of the state Department of Administrative Services, wrote the Council on May 4 that the state’s contracted real estate firm has been actively marketing the land and buildings in the north end of the city since mid-March.

He said the firm has met with “multiple interested parties over the past several weeks” in hopes of a sale that would put the property back on the city’s tax rolls. The sale, however, is complicated.

In June 2021, Gov. Chris Sununu directed the state to market the property as an “as-is” sale. The plan is to sell the core facility with its aging brick structures which were first used to house people with developmental disabilities in the early to mid-1900s, then used as a corrections facility until 2009.

Arlinghaus asked the Council to partially terminate a 99-year lease agreement signed with the city in 2000 that might help in the sale and relocation efforts. He noted that in 1984, the city and the state agreed that the city could build a one million gallon water tank on the property but it never was built and the city has not acted upon its license nor is currently interested. That will now be taken out of the deed after the city council and executive council has voted unanimously to extinguish that license and separate out the outlying state parcels.

“I think it is a good deal for both parties,” Arlinghaus said.

Arlinghaus said the deal will be to sell the big block at the Laconia State School to one buyer. The land would then go back on the city tax rolls.

“I don’t want to carve it up,” Arlinghaus said of selling the Lakes Region Facility. “In theory, there are people who will be interested in development, but it will be one unit.”

Money from the sale would technically go back to the state’s general fund but could be distributed out thereafter, depending on legislation, timing, and other considerations, Arlinghaus said.

“Disposition of funds and whether there is…profit is a long way off. The construction piece would have to happen so much sooner,” Arlinghaus said of the E-911 facility. “The stream of money would have to be available way before that.”

Executive Councilor Cinde Warmington of Concord said she was approached with public concern about access to Ahearn State Park on the core tract that is for sale. She was told there is already an agreement in place to maintain public access to the park, on Lake Winnisquam, which is not going to be sold as part of the deal.