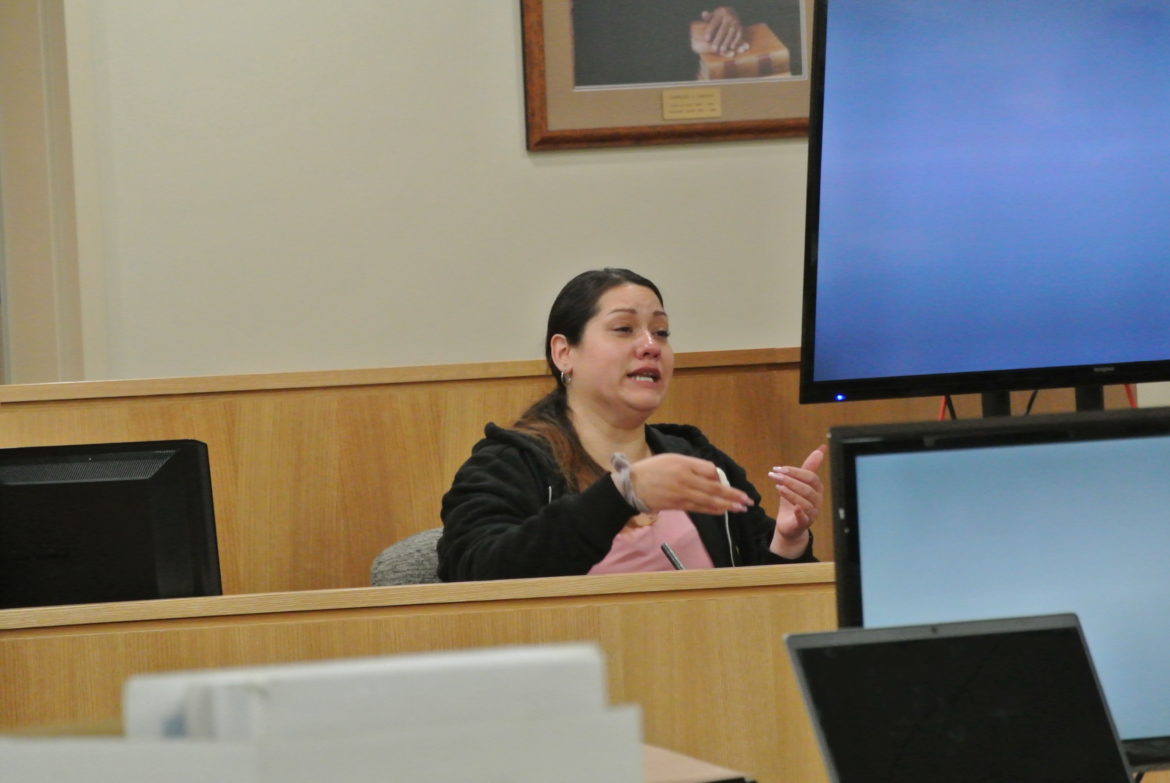 Britany Barron is pictured in tears testifying against her husband Armando Barron in his first-degree murder trial.

KEENE — “Do you know what the name of this gun is? It’s called the Judge. Ironic, huh?”
Armando Barron said to Jonathan Amerault while pointing his .45 caliber revolver at the man he was about to murder.

The final bloody moments of Amerault’s life were detailed Wednesday as Britany Barron took the stand to testify against her husband, who is on trial for first-degree murder.

Armando Barron had beaten his wife and broke her nose the night of Sept. 19, 2020, after he found a text conversation between her and Amerault on her cell phone.

Armando Barron then lured Amerault to a secluded area of Annett Wayside Park in Rindge where he beat, stomped and tortured the younger man. All while Britany Barron was forced to watch. She broke down on the witness stand in Cheshire County Superior Court while describing the exchange between her husband and the co-worker she had been flirting with.

“Look at her, look at her. Do you still think she’s pretty?” Armando Barron said, motioning to his bloodied and battered wife, whose eyes were swollen, head was covered with blood, and nose was broken.

“Jon looked at me, he said, ‘Yeah, I do,’” Britany Barron testified.

Armando Barron is charged with first-degree murder for killing Amerault. His defense rests on blaming his wife for the slaying, though his defense team has not offered any motive to back up that claim. Britany Barron detailed how her marriage was falling apart, and she was looking to Amerault for friendship and maybe more when her jealous and violent husband found out.

The Barrons were living in Jaffrey with Armando Barron’s mother and stepfather, and the couple’s three young children. He did not work but homeschooled the kids. She worked at Teleflex Medical, often getting dropped off and picked up by her husband.

At some point in the summer of 2019, Armando Barron did something to lose his wife’s trust, she said. The exact details of that incident are sealed, but Britany Barron said she tried to save the marriage, but by 2020 she wanted out. A week before the murder, she first went to her husband to tell him she wanted a divorce.

“I told him I wasn’t in love with him anymore. I thought we were really good parents together, but romantically it wasn’t working,” she said.

Armando Barron, the man she’d been married to since she was 18, then beat and strangled her past consciousness in their bedroom and beat her, she said. After that beating he started to calm down.

“I’m not going to fucking kill you. I thought I could slap some sense into you,” he said.

Britany Barron offered to keep the family together, saying she would live with their daughters in the home and continue to pay expenses, but she had to get out of the marriage.

“I told him I can’t be with him. ‘I don’t want to worry about what you’re doing,’” she testified.

As the marriage was breaking up, she was starting a romantic friendship with Amerault, the young engineer she teasingly called “Abercrombie.”

In the days after the beating, she started working with Amerault on a project. During this week their friendship blossomed. Amerault’s friend, Austin Zuercher testified Tuesday that his friend was lonely and eager to be in a relationship.

Britany Barron and Amerault spent time together, and even hung out one day after work at MacDowell Dam in Peterborough. During this conversation she said she could only offer him friendship, since she was married. She did say she wanted to get to know him better, and they shared an awkward kiss that day. The next day they saw each other at work and on break kissed again.

“It was different from the first time. It wasn’t just a peck,” she said.

She said Amerault was nice and kind outside of work.

“Seeing him outside of work I was like, ‘Wow, you’re really cool. You’re a really cool guy,’” she said.

On Saturday, Sept. 19, he texted plans to meet with her at a park while she was with her daughters. Britany Barron texted back that was not possible, since she did not want her daughters to tell Armando Barron. Amerault texted they should teach the girls to lie about seeing him.

“We can teach them to keep secrets,” Amerault texted.

“You’re bad,” she texted back with a heart-eye emoji.

It was that heart-eye emoji and some sexual themed text that set off Armando Barron when he checked his wife’s phone that day. He exploded and beat and strangled his wife. She screamed and screamed, she said, but no one came to her aid, not her in-laws and not the neighbors.

Armando Barron shouted at his children to go see their grandmother in the other side of their Main Street duplex. He got the Judge .45 caliber revolver and repeatedly shoved it in her mouth, she said.

Armando Barron got his wife and went to the connecting duplex door to tell his mother he was going out with his wife. They opened the door between the duplex units and standing there was her oldest daughter. Britany Barron said she tried to mouth to her child that she needed help, but the child could not help.

Britany Barron testified that she knew she was going to die but was comforted that at least her children would not see the murder.

Armando Barron then drove her to Annett Wayside Park, beating her on the drive over. During the drive, he asked her how many times they kissed, and Britany Barron testified that she lied, and told her husband about one kiss.

Armando Barron used her phone to lure Amerault to the park, and there he beat and stomped Amerault. During the beating, he asked Amerault how many times he kissed his wife, and Amerault told him that it was two kisses.

Armando Barron, angered about the lie, then tried to get his wife to kill Amerault three times; forcing the gun in her hand, making her step on Amerault’s neck, and then forcing her to slice his wrists.

Finally, Armando Barron shoved Amerault into the back of his own Subaru and put his wife into the front driver’s seat.

“You know, I’m going to let you live,” Armando Barron said, according to the testimony.

“Wait, I thought you were going to let me live. I guess that makes both of us liars,” Armando Barron said before shooting the Judge three times, she testified.

Britany Barron’s testimony lasted most of the day and included details about the long drive up to the Atkinson Gilmanton Academy Grant near the Maine border where she was forced to cut the head off Amerault’s body.

The cross examination by public defender Meredith Lugo was just starting at the end of the court’s day. That cross examination is expected to resume Thursday before the court breaks for the week. The trial will restart again on Monday.