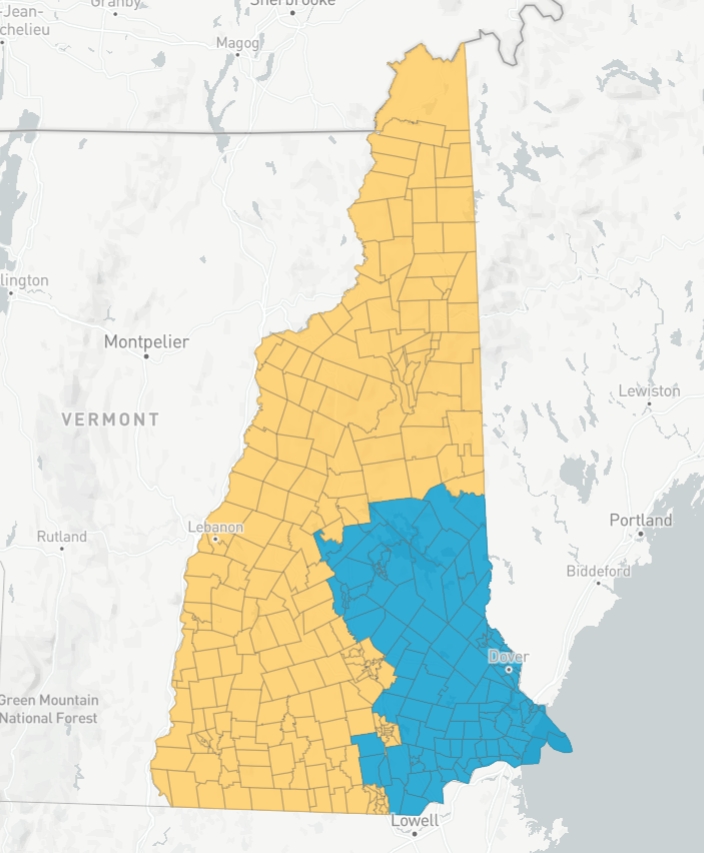 The new map puts both of the state's U.S. Congressmen, Annie Kuster and Chris Pappas, both Democrats, in the same 2nd District. Minor changes Monday to the above map that was released Friday and are not reflected include Bristol being moved to CD 2 and Andover and Hill moved to CD1.

CONCORD- A Committee of Conference on SB 200 produced U.S. Congressional districts Monday that didn’t sit well with Democrats who said they remain unfair and unrepresentative.

The new map puts both of the state’s U.S. Congressmen, Annie Kuster and Chris Pappas, both Democrats, in the same 2nd District. Minor changes Monday to the map that was released Friday included Bristol being moved to CD 2 and Andover and Hill moved to CD1.

Gov. Chris Sununu wouldn’t say Tuesday if passed whether or not he will sign it into law.

“This latest proposed map just came out of the Committee of Conference yesterday, and as such, the Governor is still reviewing it,” said Ben Vihstadt, Sununu’s spokesman.

The Congressional map will come before the full House next week.

House Democratic Leader Rep. David E. Cote, D-Nashua, said Monday: “The map endorsed by Republicans today, which takes the historically unprecedented step of moving Manchester to CD 2, is just as unacceptable as the gerrymandered Congressional maps they have offered previously.

“This should not be a difficult process.  As Democrats have proposed on multiple occasions, our current Congressional districts can be realigned in accordance with the 2020 U.S. Census by simply moving one town from CD 1 to CD 2.

“Instead, Republicans are bending over backwards to create gerrymandered districts that give themselves an artificial political advantage.  By not appointing a single House Democrat to the Committee of Conference, the Speaker has removed our ability to assure fairness and affect a positive outcome to this process,” Cote said.

On Friday House and Senate Election Committee chairmen issue joint statement on the latest redistricting plan that came out of Monday’s Committee of Conference with only minor changes.

“We are pleased to announce that we have been working on a redistricting plan for our two U.S. Congressional Districts that is both constitutional and fair.  In our opinion, the map that we have created honors both of those important goals.”

“For the past two months, New Hampshire Republicans have gone in circles proposing one partisan redistricting plan after another. The districts the Committee of Conference passed today are a blatant attempt to pre-determine the outcomes of elections.

“We expect Governor Sununu to veto these maps, as he has committed to do so for the last equally unfair district proposal.”

Sununu had pledged to veto the House’s initial district proposal.