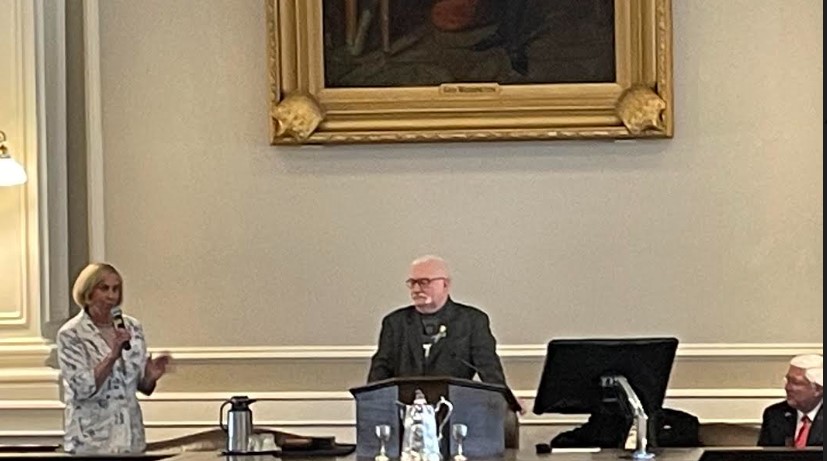 Lech Walesa is pictured at the podium Thursday at Representatives Hall where he spoke to members of the House and Senate.

CONCORD – Ivermectin could be handed out by pharmacists in New Hampshire under a bill approved by the House Thursday and a committee of conference is being set up to draw up a new congressional map.

The New Hampshire House on Thursday approved 14 committees of conference to iron out differences on amended bills between it and the Senate, including one on redistricting the state’s two congressional districts.

They also concurred with the Senate on about 75 other bills now headed to Gov. Chris Sununu’s desk.

In a joint news release from Senate President Chuck Morse, R-Salem, and Speaker of the House Sherman Packard R-Londonderry, they said Senate Bill 200 on redistricting needs a legislative solution quick.

They have directed Rep. Barbara Griffin, R-Goffstown, chair of the Special Committee on Redistricting, and Sen. Jim Gray, R-Rochester, chair of the Senate Election Law and Municipal Affairs Committee, to work together on a new map apportioning our congressional districts “that is constitutional, fair, and released in a timely manner to ensure that the public has an opportunity to provide input.”

All Committee of Conference meetings on SB 200 will be open to the public. Details regarding the schedule will be released soon and posted on the General Court of New Hampshire website, including information regarding a live stream on YouTube.

Also sent to committees on conference, after the Senate refused to concur with the House on their amended bills were ones related to broadband matching grants (SB 445), the Sununu Youth Services Center (SB 458), grants for needy schools (SB 420), a right-to-know ombudsmen (SB 301) dash camera grants for transportation workers (SB 401), one related to the Burgess power plant (SB 271) and one relative to charter schools (SB 238).
To track progress on the committees of conference follow this link https://www.gencourt.state.nh.us/committee_of_conference/

IVERMECTIN
Pharmacists will have a standing order to dispense the drug Ivermectin for those with COVID-19, even though it has not been proven to work if Gov. Chris Sununu signs a bill that has now been amended and passed by both chambers.

By a narrow vote of 157-148, the House of Representatives concurred with the state Senate on House Bill 1022 and the measure now goes to the governor for a signature along with about 74 other amended bills the House and Senate were able to agree upon.

Rep. Jerry Knirk, D-Freedom spoke against the Ivermectin measure several times and after the vote said “standing orders with pharmacists should only be used to dispense medications in situations that are clearly supported by the best available medical evidence. Ivermectin does not reach this level of evidence. It is inappropriate and backward for the legislature to pretend there is a consensus and then evaluate to see if one exists. Legislation must be informed by the best available evidence, not poor studies, and wishful thinking. Plain and simple, we should not legislate the practice of medicine.”

The bill phases out the standing order in two years and appoints a commission to review the use of the drug for COVID-19.
Also headed now to the governor are bills:
– Relative to having the state’s new vaccine registry be an opt-in system rather than an opt-out (HB 1606) and others related to vaccine mandates and workplace requirements (HB 1455)
– Relative to facial coverings in schools and (HB 1131)
– Extending disability help for youths to 22 rather than the current cut-off at age 21
– Requiring a performance audit for the Education Freedom Accounts. (HB 1135)
– Giving state retirees an extra $500 a year in their pensions if they made $30,000 or less before retirement (HB 1535.)
LECH WALESA SPEAKS
Addressing a joint convention of the New Hampshire House and Senate at the start of their day’s work, Lech Walesa urged the U.S. to lead a new world order at a time when Russia is attacking Poland’s neighboring Ukraine.

The 1983 Nobel Prize winner, union organizer, and former President of Poland, said the United States really has to “succumb to the role of the leader in the world,” and has to organize the world to carry out that struggle to define future success.

He said the nations of the world are at a crossroads with old failed systems not working.

“We need to focus on the day-to-day assistance to Ukraine,” he said to an ovation, noting Poland has placed over 3 million refugees, mostly women and children from Ukraine.

“We need to force a new political system into Russia. We must not allow for a single individual, a madman to threaten the world,” he said.

NON-CONCURRENCE
The House voted to not concur with the Senate on about five bills and that essentially kills them.
They include changes to annual vehicle inspections (HB 1474) requiring public comment periods at school district meetings (HB 1195), changing absentee voter applications (HB 144), and voter registration (HB 1203).