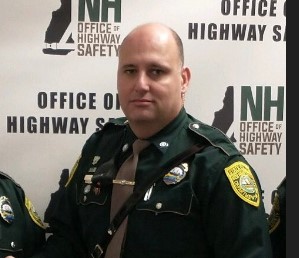 An independent investigator questioned the credibility of former Canaan Police Officer Samuel Provenza during a use of force investigation.

“Officer Provenza used force, and admits to using force, but the type and amount of force used may not be accurately represented by Provenza,” the report released Wednesday states.

The report into Crystal Eastman’s complaint about her 2017 arrest was released Wednesday after years of legal battles. Eastman is now known as Crystal Wright.

Then, after Grafton Superior Court Judge Peter Bornstein ruled that the report ought to be released, Provenza, now a New Hampshire State Trooper, appealed to the New Hampshire Supreme Court.

Last month the Supreme Court unanimously ruled that the report is a public record under the right-to-know law, RSA 91 A.

The town, however, settled her federal lawsuit about the arrest and use of force in February for a $160,000 settlement.

According to the report written by Mark Myrdek, a consultant with Municipal Resources Inc., Provenza’s statements during the investigation into Wright’s arrest and injury do not match the statements made by Wright, which are backed up by witnesses. Additionally, while the medical finding of the injury provided by Dr. Jessica Sin is redacted in the report, Myrdek states the injuries were caused by Provenza.

“In this investigator’s opinion, this type of injury is caused by impact, not only damaging the ACL but bruising of this area as well, indicative of impact as described by Dr. Sin, not just a twisting of the knee during the arrest.

Wright said she felt Provenza hit her knee during the arrest, after he had pulled her out of the car by her ponytail. According to Myrdek, Provenza denied hitting Wright’s knee, and he denied the hair pulling. Three witnesses all told police they heard Wright yell about her hair being pulled during the incident, according to Myrdek.

“A new issue is created when Officer Provenza denies making any contact with Ms. (Wright) Eastman’s knee or legs, yet she received this very serious injury. Provenza also denied pulling Eastman’s hair, as stated by Eastman and supported by statements from the witnesses who heard her yelling to Provenza to stop pulling her hair. This raises a question of Officer Provenza’s credibility during the investigation,” Myrdek wrote.

“If you fight with police, sometimes you get injured,” Frank told Myrdek.

Frank would not comment directly on Myrdek’s questioning of Provenza’s credibility when reached Wednesday.

“This case was investigated several times by local, county, and state agencies. They all found the allegation un-sustained and Officer Provenza credible, and cleared him of any wrongdoing,” Frank said.

There is no cruiser video of the incident, as Provenza’s onboard camera was malfunctioning, according to Myrdek’s report. InDepthNH.org has reported that Provenza was investigated for allegedly tampering with the camera system in order to delete the video, an accusation he has denied. That Grafton County Sheriff’s Department investigation did not uncover any hard evidence of video tampering by Provenza.

Provenza is an aggressive officer who proactively makes traffic stops, Frank told Myrdek. Frank has investigated prior complaints about Provenza from other people, but he never found any wrongdoing by the officer.

Provenza himself told Myrdek that he could have done things differently during the arrest.

“Officer Provenza stated that looking at this in retrospect, here may have been other ways to handle the situation and that one alternative would have been being more forceful with her, but he felt that she was not cooperating and thought this was the best way to deal with her at the time,” Myrdek wrote.

Wright admits to being agitated when she was stopped on Nov. 30, 2017, by Provenza. Wright was reported for driving suspiciously as she was following a school bus. The Wright family was having issues with the school bus driver.

During the stop, Provenza reportedly put his head into Wright’s car and was acting aggressively, according to her statement and lawsuit. Provenza told Myrdek he was getting in close to see if he could detect the odor of alcohol or marijuana.

During the stop, Wright became more agitated, and she reportedly “snatched” her driver’s license back from Provenza and picked up her cell phone to record the interaction. That’s when Provenza took aggressive action, according to Myrdek’s report.

Provenza then allegedly grabbed the 5-foot, two-inch 115-pound woman by her ponytail and dragged her out of her car as she was screaming and begging for someone to help. Wright states in her lawsuit that next, he handcuffed her and hit her in the knee.

Provenza was the only other witness present when New Hampshire State Police Trooper Christopher O’Toole shot and killed Jesse Champney in December of 2017. The shooting was deemed justified despite the fact Champney was running away from O’Toole and suffered from a gunshot wound to his back, according to the New Hampshire Attorney General’s report. Provenza’s name does not appear on the public Exculpatory Evidence Schedule, or Laurie List.