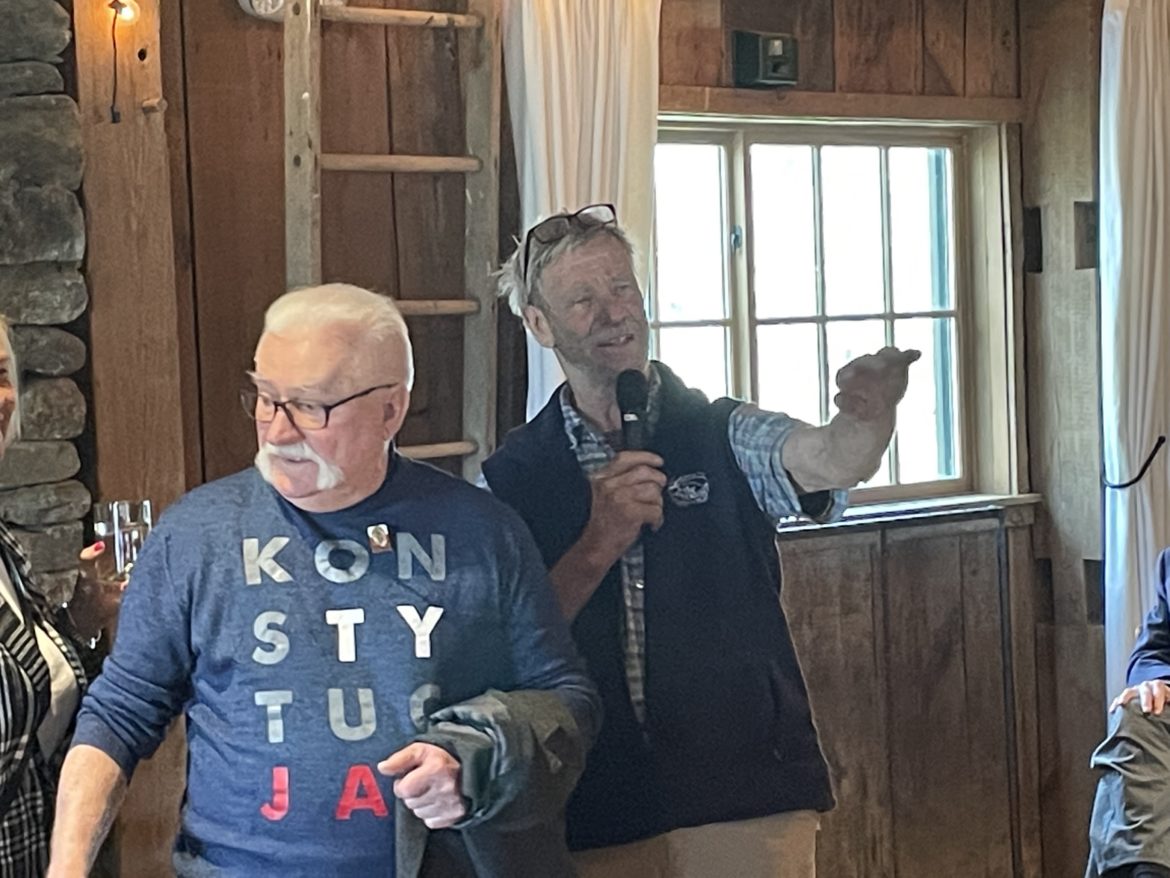 Lech Walesa, left is pictured with Alex Ray at the Barn on the Pemi Sunday.

PLYMOUTH – Nobel Peace Prize laureate Lech Walesa said it is time for the United States to restore its leadership position in the world and work globally to solve problems rather than going it on its own.

He said this nation has a lost a bit of its power from the days at the end of the Cold War when he rose from an imprisoned union activist to be the first modern-day democratically elected President of Poland.

Those were the days when Ronald Reagan was calling the USSR the “evil empire.”
The pandemic and the rise of the European Union, he said, has taught the importance of working across national boundaries toward a greater good and the issue in neighboring Ukraine reminds him a bit of Poland’s fight against communism.

Walesa will address the New Hampshire legislature on fragile democracies and the changes governments need to make for greater peace in the world on Thursday at 10 a.m.

It comes at a time when Alex Ray, owner of the Common Man, who hosted a gathering with Walesa this past Sunday, plans to head to Poland to see what he can do to help Ukraine and relief efforts in Poland.

Walesa, 78, was an electrician in the shipyards of Gdansk, Poland who became a union activist and leader of one of the world’s most powerful unions.

He is meeting with activists, academics and legislators in Connecticut and New Hampshire this week to talk about what he calls this “transitory” period in the world.

Walesa is expected to receive an honorary degree at New England College next weekend and will spend time this week meeting with Americans in support of his foundation which is focused on democracy, human rights for the future.

On Sunday, he spoke through a translator at an informal setting with friends of Ray, who flies to Warsaw May 15 to meet with leaders of both the YMCAs in Ukraine and Rotary International in hopes of finding how he can make the most impact to better the situation in that region.
“Raising money is one part,” Ray said before the event, “The distribution of money is a sensitive thing to do.”

Ray welcomed Walesa, to the Barn on the Pemi and Walesa gave those attending a bit of history on Poland and how its geography has placed it near Russia. His country tried many different ways to break away from communism but found the true power was in labor strikes.

“Very simply, we had no other means of struggle at that point,” he said.
He called its location in the heart of Europe “between two big evils, Germany and Russia and you may know from history they are big nations that enjoy military socializing…and they are known to visit one another from time to time,” with the shortest distance being across Poland.

“Once entered the country, they would look around and say ‘hmm, we like it here,’ and they would stay on for longer.”

He said it was after World War II that the Russians decided to stay on for 50 years bringing their communism, and that control was also previously the case for 120 years before that.
Poles are really democratic individuals, Walesa said, and it took a long while to free its nation from communism.

“I am bringing it up right now for you to realize that due to our geographical location and our experience we have special experience…of which side we would be attacked from next,” Walesa said.
That is why many Polish people could foresee developments and dangers, such as Russian aggression against Ukraine.

Poland’s position is now much better, after the Cold War, he said, because it is a member of NATO and a member of the European Union.

“We are witnessing a new era in the world and maybe you do not perceive it so clearly here in the United States but if you look at Europe you can realize we don’t look at single states and countries,” but in more unionized approaches to world issues, he said.

During the Cold War,  he said, the United States was that ultimate refuge and helper to anyone in danger.

Then, he said the U.S. was the undisputed economic and political leader of the world.
“That is what your leadership position was then during that divided world,” he said.

But he noted the “greatest disaster is that the U.S. is no longer the moral and political leader of the world and I think what the world requires from the U.S. is an entirely different leadership,” he said. “No more solving problems for the rest of the world by yourselves.”

He said global problems like the pandemic have helped this nation and the world look to global solutions and technology has helped.

“So on this very trip to the United States, my encouragement is for the U.S. to get down to work to restore the leadership position to the United States.
“The future should be based on our shared values that we can all agree on,” he said rather than political boundaries.