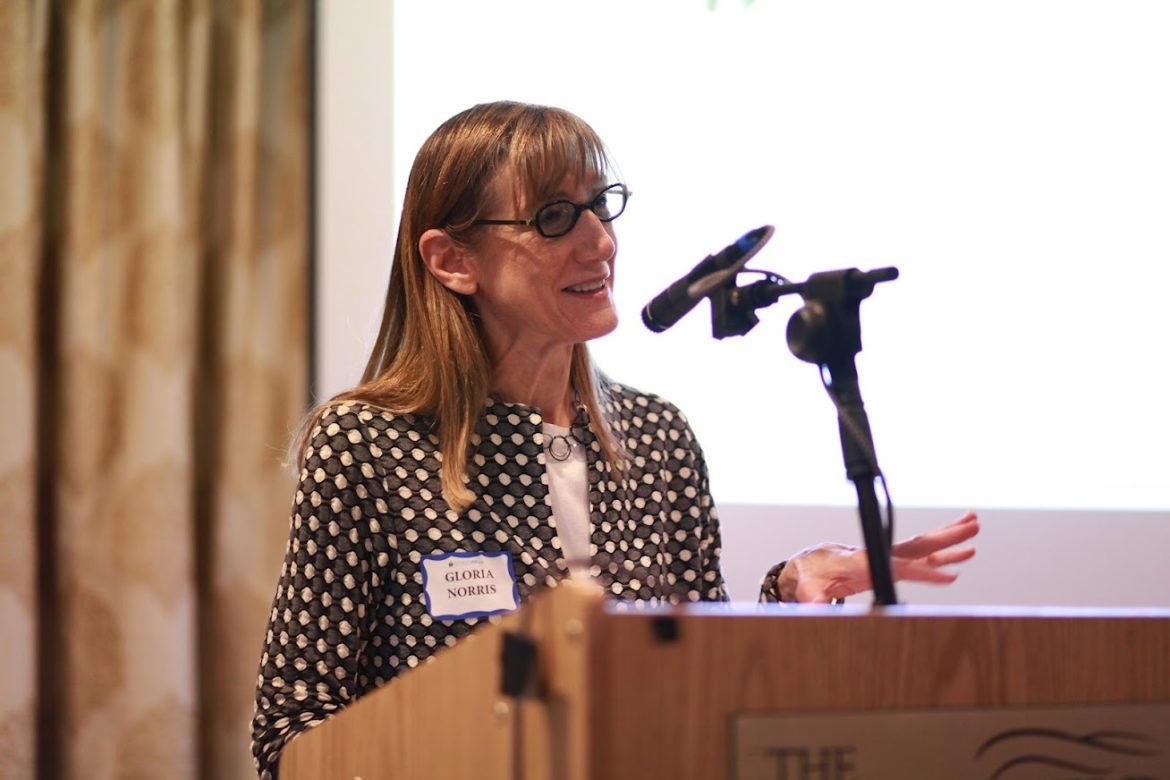 “A true democracy will die without it and exposing local corruption is every bit as important as opposing national corruption.” Gloria Norris

Gloria Norris, the award-winning author of KooKooLand, a memoir of her childhood, and a Manchester native and filmmaker, spoke at the New Hampshire Sustainable News Summit Project on Wednesday night.

In a speech titled, Truth or Consequences,  Norris talked about the importance of supporting and sustaining local journalism as a way to ensure the free and flowing information important to keep us protected from fake news and protect local news jobs. She is a member of the Board of Directors for the New Hampshire Center for Public Interest Journalism, the parent of InDepthNH.org.

“I’m just very emotional. I love this organization (InDepthNH.org) and I have to say I think it’s so important to this community and to the state that we all love,” Norris said.

The event was the fourth in InDepthNH.org’s special series on the sustainability of community journalism, which will continue into the summer and fall.

Through Norris’ investigative work for her memoir, Norris learned what it took to get the truth out of family and friends who knew her father, Jimmy, and write the truth in an unmerciful way. The discovery is how she learned to relate to and find her love of journalists, local news and InDepthNH.org.

“Put it on a stonewall,” Gloria Norris’s father, part conman, part colorful rogue, and abuser, is what he would say to his young daughter. He was warning her to “keep her big mouth shut. Don’t spill the beans or rat out your old man.”

Gloria connected with Nancy West, co-founder and executive editor of InDepthNH.org after Gloria ran an obit for Susan Hughes, a convicted murderer from the 1970s with whom she had gone to school. They spoke on the phone and discovered a shared sensibility. Gloria as a memoir writer and Nancy as an investigative journalist.

“We were like partners in crime. Specifically, we shared an interest in criminal justice. Through our writing, we were attempting to shine some light into a few dark corners of injustice and hopefully move the needle just a little, towards fairness and truth.”

Norris reminded us, “Sadly, human beings are capable of some pretty rotten things. It’s dirty grueling work getting people to come clean, but a true democracy depends on it. A true democracy will die without it and exposing local corruption is every bit as important as opposing national corruption.”

Norris, who lives in California, was in town this week to accept an award as one of 16 Central High School graduates inducted into the school’s Hall of Fame. The ceremony will be at a dinner at the Executive Court Conference Center Friday.

Laura Knoy, formerly of The Exchange on New Hampshire Public Radio, introduced Norris and conducted a question and answer session taking questions from about 60 people present at the Derryfield Restaurant. At the end of the night, Norris signed copies of her best-selling memoir KooKooLand and talked with grateful readers.

InDepthNH’s executive editor, Nancy West, started the evening off by explaining the situation newspapers are facing. She shared, “One newspaper, The Laconia Citizen closed its doors forever. Scary times for a news junky like me. And they’ve gotten scarier.”

West reminded the crowd that, “the latest figures show that 69 percent of all New Hampshire news jobs have gone in the last two decades.”

But the good news, West said, is InDepthNH.org is doing something about it by building the New Hampshire Sustainable News Summit Project. The project began with funding from the New Hampshire Charitable Foundation’s Geoffrey E. Clark and Martha Fuller Clark Fund.