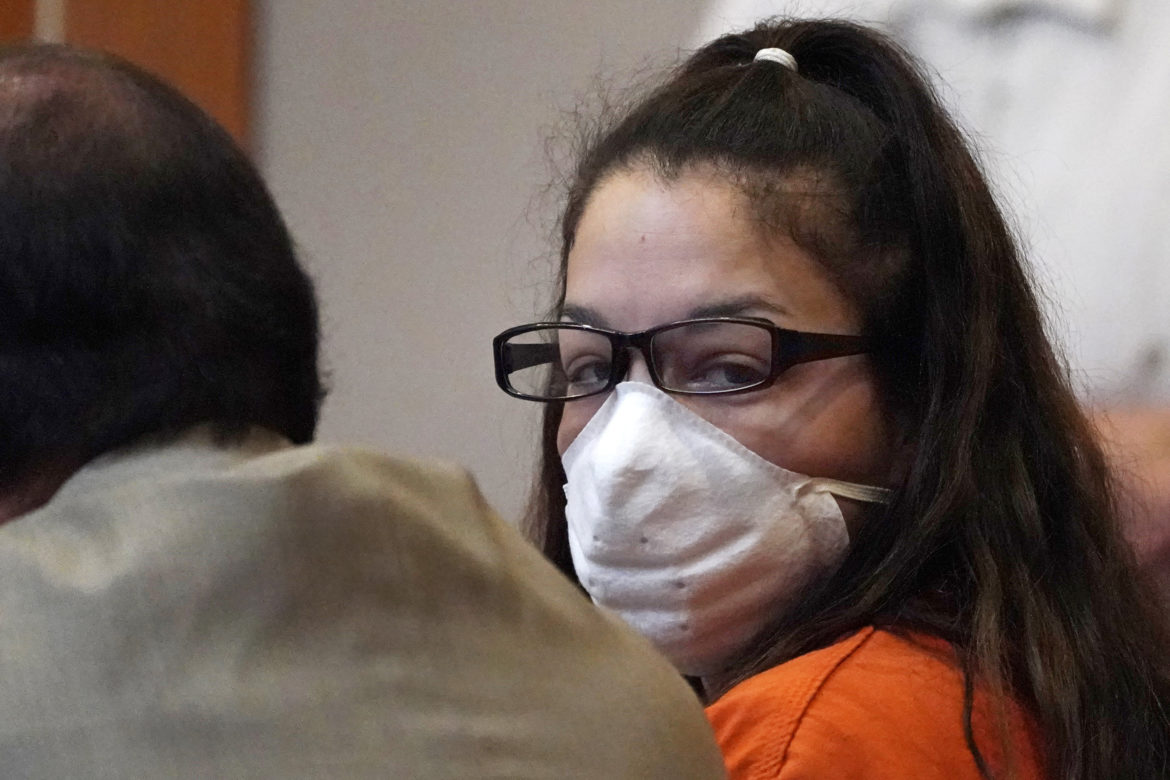 Kayla Montgomery looks towards the gallery during proceedings at Hillsborough Superior Court, Thursday, May 5, 2022, in Manchester, N.H. Kayla Montgomery, the stepmother of Harmony Montgomery, who disappeared in 2019 at age 5, appeared in court for a bail hearing on unrelated weapons charges. AP Photo/Charles Krupa, Pool

Kayla Montgomery, the stepmother of the missing Manchester girl, Harmony Montgomery, violated the bail order in her welfare fraud and firearms cases when she sent a message to the girl’s father, Adam Montgomery.

Harmony has been missing since 2019 when she was 5 years old, and so far, no one in her family is saying what happened to the girl. Both Kayla Montgomery and Adam Montgomery have been held on charges related to the investigation.

Adam Montgomery is charged in the gun case, and for charges of child endangerment, custody interference and second-degree assault for giving Harmony a black eye in 2019.

The pair were ordered to have no contact, but at Thursday’s bail hearing held in the Hillsborough Superior Court – North in Manchester, Assistant Attorney General Jesse O’Neill told Judge Amy Messer that Kayla Montgomery told her father-in-law to pass a message on to Adam Montgomery.

“I still love him,” Kayla Montgomery said in a recorded jail house call.

O’Neill said since she could be called as a witness in the case, her affirmation of their relationship is significant, and that is one of the reasons the court had originally ordered no contact.

“This defendant and Adam Montgomery are potential witnesses in each other’s cases, they both potentially have information that they could be called on to testify,” O’Neill said.

Kayla Montgomery is currently being held on $5,000 bail, meaning she could be out if she posts $500 for a bond. Kayla hadn’t been released because she didn’t have the money to post bail. Paul Garrity, Kayla Montgomery’s attorney, argued that she ought to be freed on personal recognizance without paying any bond. Garrity said Kayla Montgomery is charged with crimes that rarely result in prison sentences.

“This is welfare fraud,” he said.

Messer did not issue a bail order on Thursday but took the matter under advisement. That leaves Kayla Montgomery jailed for the time being.

According to police, Kayla Montgomery told police that Harmony’s father, Adam Montgomery, 31, had taken her to live with her mother in Massachusetts around Thanksgiving that year. Adam and Kayla Montgomery, together with two common children and Harmony were evicted from 77 Gilford St. in Manchester on Nov. 27, 2019.

The abuse allegation against Adam Montgomery was investigated by a caseworker with the New Hampshire Division of Children, Youth and Families, who ruled it “unfounded.”

“The key and central finding in this investigation and report are that Harmony’s individual needs, wellbeing, and safety were not prioritized or considered on an equal footing with the assertion of her parents’ rights to care for her in any aspect of the decision making by any state entity,” the report states.

Harmony’s birth mother, Crystal Sorey, reported to authorities in late 2021 that her child had not been seen in more than two years.