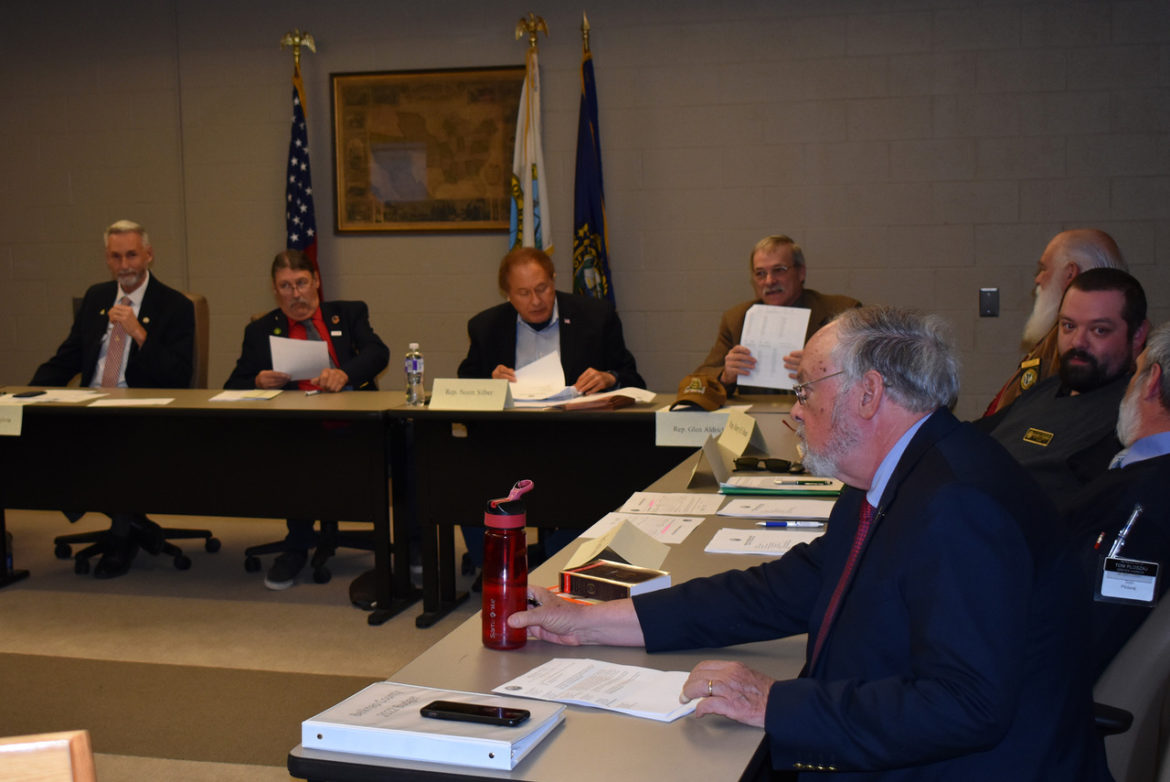 Members of the Belknap County Delegation who are all state representatives, met on May 3. Chair Michael Sylvia, left, and Norm Silber, third from left, were grilled about legal expenses that exceeded the appropriation by $30,000. From left are Reps. Sylvia, Ray Howard, Silber, Glen Aldrich, Harry Bean, Richard Littlefield, Thomas Ploszaj, and Paul Terry. (Tom Caldwell Photo)

LACONIA — A citizens’ petition seeking the removal of Belknap County representatives Michael Sylvia, R-Belmont, and Norman Silber, R-Gilford, based on their exceeding appropriations for legal expenses as representatives of the County Convention, failed to gain traction due to the petitioners’ faulty reading of the statutes.

The delegation had approved spending up to $20,000 to defend against a lawsuit by the Gunstock Area Commission.

The citizens’ petition relied upon RSA 24:16, which refers to elected county officials, but that statute does not apply to state representatives.

Rep. Timothy Lang, R-Sanbornton, led the argument that delegation members needed to know why the legal bills were so much higher than what they had approved spending.

The debate at the May 3 meeting was the latest development in the ongoing dispute between the county delegation and Gunstock Mountain Resort.

Rep. Harry Bean, R-Gilford, sought to smooth over one of the underlying issues by collecting the signatures of 17 of the 18 members of the delegation, pledging to never support the privatization of Gunstock.

It was Sylvia’s libertarian leanings that led some Gunstock supporters to conclude that the delegation was out to destroy the county-owned ski area or turn it over to a private entity to run.

When the Gunstock commissioners asked the County Delegation, which has the role of appointing and recalling commissioners of the resort, to remove one of its commissioners last August, the delegation found insufficient grounds to remove Peter Ness.
Sylvia then sent a letter in which he announced his plan to discuss actions by three of the other commissioners that he said “raise grave concerns and possible questions of criminal activity” that could be grounds for their removal.

That letter led three of the five Gunstock Area Commissioners to vote to file a lawsuit against the County Convention to prevent their removal — a move that Sylvia termed a “serious conflict” since it was aimed at protecting themselves.

Sylvia explained at Tuesday’s meeting that Silber had taken it upon himself to seek out a law firm to defend against Gunstock’s lawsuit, making sure the firm was not doing business with anyone where there might be a conflict.
As chair of the delegation, he also served with Silber as the “control group” working with the attorneys at Cleveland, Waters & Bass in the County Convention’s defense.

Sylvia went on to describe a control group as being a legal term for representatives with the authority to obtain professional legal services on behalf of an organization. He said by acting as a control group, he and Silber saved on legal costs because it would have been a lot more expensive to have attorneys meet with the entire delegation.

When other members of the delegation asked to review the email exchanges among themselves to make sure the discussions were directly related to the lawsuit, Silber said doing so would make the emails subject to the state’s Right-To-Know law. He quoted case law to back up his claim that disseminating the emails beyond the control group negated attorney-client privilege.

Responding to speculation that some of the items on the law firm’s invoices appeared to go beyond a defense against the lawsuit, Silber said references to “removal of Kiedaisch” were appropriate, since the lawsuit was seeking to prevent the removal of Gary Kiedaisch and two others from the Gunstock commission. An email from Ness to the law firm, he said, was because the attempt by the commissioners to remove Ness made him a “friendly witness” for the defense.

A motion to release the emails to the delegation and, ultimately, the public failed, and the subsequent motion to approve the $30,000 over-expenditure in legal fees passed.

After much discussion, the delegation also voted to appropriate $1.3 million in American Rescue Plan funds for the paving of Gunstock’s parking lot. The motion stipulated that the county commission would release the funds upon the receipt of invoices for the work.

The delegation also approved a $381,000 ARPA appropriation to be added to the $100,000 already appropriated to replace leaking skylights at the Belknap County Nursing Home.