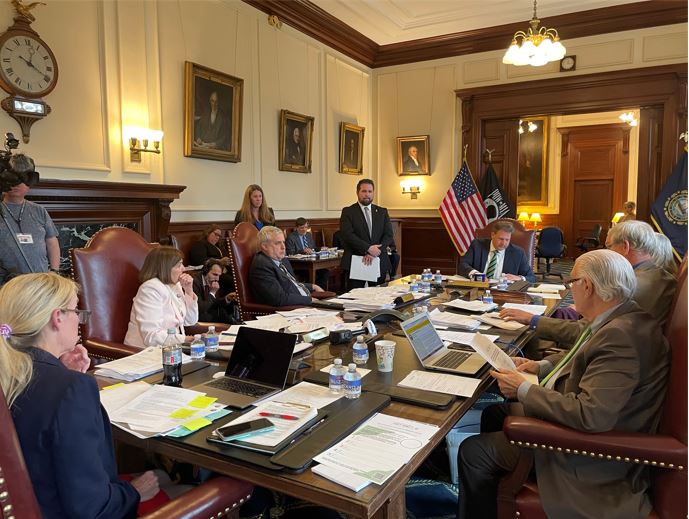 Gov. Chris Sununu is pictured with members of the Executive Council at Wednesday's meeting.

CONCORD – After a thorough vetting, the Executive Council voted 4-1 to support a key housing initiative of Governor Chris Sununu’s that would provide $100 million in federal funding for housing projects to allow them to be quickly built and finished to meet needs of the state for low- to moderate-rental housing and providing incentives for municipalities to support such housing.

Currently, the state has a low-income rental availability rate of about 0.7 percent when 3 percent is considered more healthy, said Taylor Caswell, commissioner of the office of Business and Economic Affairs which will head up the grant application program. He attended the meeting Wednesday by phone.

The $100 million federal in ARPA funds have already been approved by the Joint Legislative Fiscal Committee. This was the last hurdle.
The contract was tabled two weeks ago as numerous questions were posed by councilors but removed from the table with the objection of Republican Councilor David Wheeler of Milford Wednesday. Wheeler cast the lone dissenting vote.

After the vote, Elissa Margolin, director at Housing Action NH, said she was pleased.

The Council questioned in detail the program and then announced where they stood on it.

Councilor Janet Stevens of Rye, a Republican, advocated for the program.

“By no means is this luxury housing,” to be built, she said. “I need this housing in my district.”

Councilor Cinde Warmington of Concord, a Democrat, said her primary concern was that this money goes to affordable housing.

“We don’t want more AirBnBs,” to be built with this money, she stressed.

Warmington said the detail provided in the past two weeks “is a step in the right direction.”

The most important thing she said after the vote was that contracts for the funding will still need to go before the Council.

Funding is available for a limited time through the federal American Rescue Plan Act, or ARPA, and councilors said they are hearing from communities in their districts expressing interest in getting in on the first-come-first-served financial incentives.

“I cannot emphasize enough that time is of the essence here as we move to have this program available for the upcoming construction season while remaining mindful of the relatively short window we have under the ARPA rules,” Caswell wrote last Friday.

About $30 million would go to municipalities for flexible grants that issue permits for eligible housing within six months of initial application.

It would have limits and restrictions on use that would be made on a per-unit basis for housing that have five or more rental units and adds to the local housing stock. It would be a limit of $10,000 per unit for a limit of $1 million per municipality To be eligible under this program, units must meet the same criteria as the capital grant.

The bulk of the grant program would allow about $60 million, including $10 million to NH Housing Finance Authority, to provide flexible supplemental funding available for the development of new multifamily rental housing units anywhere in the state.
The program is intended to accelerate unit production in projects already using other private and public funding sources.

The capital grant money could be used for construction and other hard costs such as infrastructure upgrades necessary for a project, environmental remediation, Americans with Disabilities Act for federally-required upgrades.

It would not be eligible for use for permitting costs, engineering, legal, or architectural help, land acquisition, landscaping, financing, and developer fees.

Eligible applicants for the money are project developers and/or owners of multifamily rental housing projects of three units or more per structure.

The councilors will be able to approve individual grants likely in batches with the ability to remove items, Attorney General John Formella said.

Wheeler asked if they would be divisible if the contracts came in bulk and the governor said “sure.”

Geographic parity was a concern for Executive Councilor Joe Kenney of Wakefield, a Republican, who represents the North Country. He said he worried that most of the money would go to Southern New Hampshire.

The governor said he was concerned about regionalizing the money. He said if the demand and need are not there might be unspent funds if it was distributed regionally “and time is ticking” to spend the federal money.

Instead, Sununu said there would be targets in place to ensure every region gets some of the funds.

Wheeler asked what guarantees would there be that the people moving into these units would have jobs in New Hampshire?

“We could just be building these for Massachusetts,” he said and ultimately voted against the program.

The governor said there was no way to ask people to sign a contract to work only in New Hampshire.

Executive Councilor Ted Gatsas of Manchester, a Republican, said Caswell did a good job of getting people to support it but the problem was that those people did not understand it. He said the project requires matches from banks and that people don’t know about that.

None of the approximately 20 developers he has spoken with recently, he said, have a shortfall right now.

Sununu said this is not for those folks who have the money. He said this program is to see the completion of projects and also to add incentives for municipalities to approve construction projects that benefit and add to the low-income housing stock in their communities.

Gatsas asked if those who asked for the money could be made public to the council? Formella said that information might only be available until after the project was initially approved, not for everyone seeking the funds.

The final vote will be at the Council table on all projects.

Under the details of the project for developers, the applicant must identify the reason for funding and demonstrate a matching dollar for dollar investment of the requested award.

Applicants for projects with more than 15 units or over $3 million in total development cost must demonstrate an affordability commitment.

The program is envisioned to run on six-week application cycles. Initial rounds will be limited to nonprofit developers and for those with less than 10 units. Applications will open on June 20, 2022, and go through June 30, 2023. Projects must aim to be completed within 18 months.

To the extent practicable, InvestNH funds are not substituted for non-federal financial support.

There is also money in the grant program for municipalities to support and study zoning. This can include an update to those rules with the stated primary goal to increase housing stock.

These funds will be distributed under rolling applications until funds are depleted and the funds must be obligated by December 2023 and completely spent by September 2024.

An additional $5 million category is slotted for the demolition of vacant or dilapidated buildings.

Municipalities would have to demonstrate how use of this program will improve the housing situation.

“I appreciate Commissioner Caswell providing additional details to Executive Councilors with plenty of time ahead of their meeting this week,” said Sununu in a letter last Friday.

“The details released by the state make it clear that these funds will have defined guardrails, ensuring housing gets built for those who need it most. I am hopeful the Councilors agree with this urgent need — our workforce, businesses, and communities are counting on us to make these investments, and time is of the essence.”

Hampstead Gets Go Ahead

The contract had been tabled two weeks ago by the Executive Council for additional questions.

The doors to the hospital in Hampstead are now open and receiving new children, officials said.

The contract with Wellpath is through June 2024 with an option to renew for one year.

Commissioner of Health and Human Services Lori Shibinette said the department received “very very good questions” from the Council and she expressed relief that the efforts can now go forward.

She said that the state has been accepting children at Hampstead for the past few weeks and that there are fewer than a handful of children who are now waiting in emergency rooms for inpatient care.

Shibinette said after the vote that many of the concerns the Council had related were related to Wellpath and whether or not they have had a lot of litigation against it.

Other concerns were related to their specific experience in the care of children rather than adults.

Attorney General John Formella said there was a review of Wellpath’s litigation history to get a sense of numbers and his office used Westlaw as well for data collection.

He said Wellpath has faced some litigation but does not have unusually high numbers given the work in which they are involved. A lot, he said, has been in corrections which is highly litigious.

He said a memo on the subject was available to the public.

Shibinette said there is an added layer of protection in the contract because this is a new vendor to the state and the issues are very critical to the vulnerable mental health patients of the state.

The state currently has a crisis where there is not enough room in inpatient mental health hospitalization for either children or adults and is trying to address it in several ways, including buying the Hampstead Hospital which they have done, and converting it from both adults and children to children only.

Shibinette said this is the contract for the operation of the facility and noted the long-time director plans to continue and the vast majority of the staff will be doing the same.

The Office of Child Advocate will be involved, Shibinette said, and required reporting will continue.

Warmington asked a number of questions. She said she appreciated all the contact that the HHS department had with her on this issue in the past two weeks and was comfortable now with supporting the contract.

Stevens said she researched issues related to Wellpath in South Carolina, got the answers she needed, and would support the contract.

Kenney said this is an extremely vulnerable population.

“Are we going to have a short leash?” on the contractor, Kenney asked.

Shibinette said she would be careful to make sure this vendor does a fantastic job which could lead to another contract but it would be put out to bid.

“Yes, we are dipping our toe in the water and giving them an opportunity,” Shibinette said, adding it would be temporary if the job was not done well.

“My biggest concern is the company going in there has very little background with children,” Gatsas said, adding that adequate staffing is also a concern. “I don’t want to see is a child who has a problem or is abused and reading about it in the paper.”
Shibinette said her priority is children and she agreed with him.

“I fully expect that if this goes badly, you will have very harsh words for me,” she said.

“I will leave it at that,” said Gatsas. “It’s about kids and making sure they are being taken care of.”