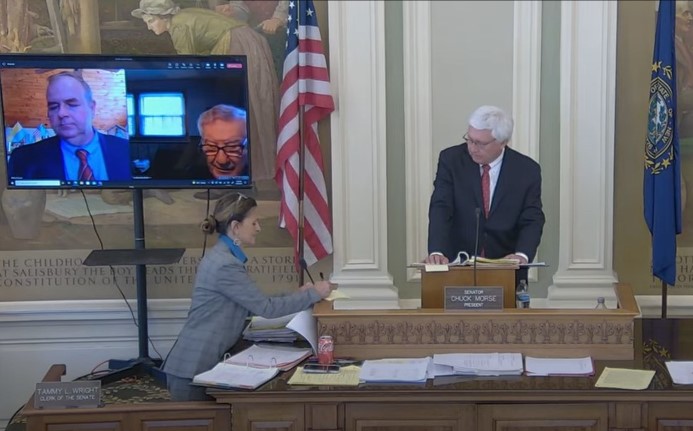 Sen. Bill Gannon and Sen. Lou D'Allesandro are pictured on screens during Thursday's Senate session with Senate President Chuck Morse at the podium.

D’Allesandro said it wasn’t the first time, that in the past he attended remotely when recovering from surgery, but it is a controversial topic at the State House because it is not allowed in the House of Representatives.

The faces of D’Allesandro and Gannon were seen on screens at the front of the Senate chambers in the State House and they both fully participated and voted on the bills before them. There was no mention Thursday as to the reason for the temporary change.

“The Senate has been gracious,” D’Allesandro said.

He said he tested positive for COVID-19 on Monday and was isolating at home for five days and after isolating will wear a face mask when he leaves the house for five days.

D’Allesandro said he has had a headache, cold symptoms and a sore throat, but overall is not feeling too badly.

D’Allesandro said Gannon mentioned to him that he had tested positive as well. Efforts to reach Gannon Friday were unsuccessful and Senate President Chuck Morse, R-Salem, didn’t respond to a request for comment, nor did House Speaker Sherman Packard, R-Londonderry.

In stark contrast to the Senate, Packard has refused to allow House sessions to include members who are sick or disabled to vote and participate remotely.

A lawsuit against Packard filed by former House Minority Leader Renny Cushing, D-Hampton, who has since died of cancer and complications due to COVID-19, argues disabled members at high risk of getting COVID-19 should be allowed to participate remotely.

The 1st Circuit Court of Appeals recently remanded the lawsuit back to U.S. District Court for further proceedings.

D’Allesandro was critical of the House not allowing remote participation for their members.

Sen. Tom Sherman, D-Rye, a physician who is running for governor, said the big news of Thursday’s session was Morse’s flexibility, allowing a Democrat and a Republican to participate remotely.

“There was rigorous debate. Everyone could participate,” Sherman said. “What the Senate president did was model how we can handle this if we have more surges” or more pandemics in the future.

“The Senate president can’t tell the House what to do,” Sherman said. “Leaders are people who lead by example. It was a wonderful solution.”