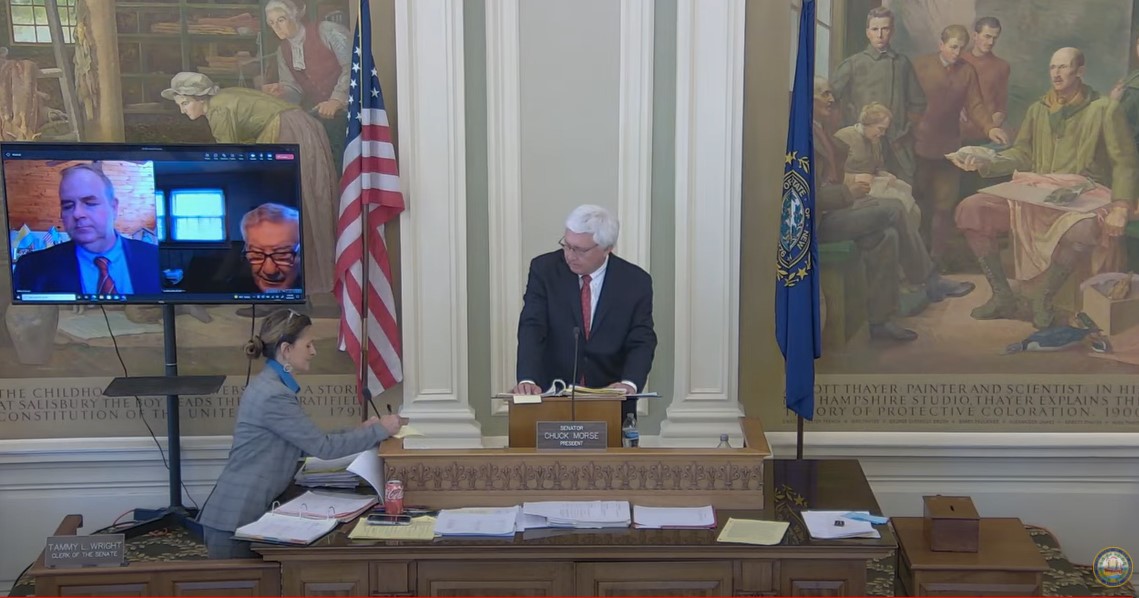 CONCORD – A bill that would have allowed adults to possess up to three-quarters of an ounce of marijuana and grow up to six plants at home was killed in the Senate 15 to 9 on Thursday.

New Hampshire is surrounded by Vermont, Maine and Massachusetts, and Canada where pot has been legalized but opponents of the bill said New Hampshire should stand strong in opposition and noted the federal government still has laws against it.

The measure would have permitted cultivators to give pot to others in small amounts. It provided that smoking or vaping in public will be punishable by a $100 fine and it would be illegal for youths to possess.

Sen. Jay Kahn, D-Keene, offered an amendment that would make possession of small quantities legal but still illegal for minors to possess. The amendment also had provisions for driving under the influence of cannabis.

He said dispensaries are lining up along the state borders in the same way that New Hampshire has lined up liquor stores at the borders.

“Drink up this bill and don’t let it go up in smoke,” Kahn urged.

The governor has expressed concern about bills related to marijuana and maintained that the state is focused on its opioid crisis and while other states have seen increases in overdose rates New Hampshire’s rates have stabilized.

He has also expressed concern about sales, particularly sales of edibles. This bill did not address edibles or the sale of the substance.

Perkins Kwoka said she supported Kahn’s amendment. She noted polls show over 70 percent of the public supports the idea.

She said the bill does not set up a commercial market but it does support legalization. She said the current situation supports a minority bias with people of color being arrested more than white people.

Bedford police arrest minorities at a lower rate, Sen. Bill Gannon, R-Sandown, said, countering her argument. He said New Hampshire is different and that is a good thing when it comes to marijuana.

Sen. Denise Ricciardi, R-Bedford, spoke in opposition to both the amendment and bill. She said she made a campaign promise to oppose legalization and said that there would be Second Amendment implications for cannabis users which could impact gun owners.

Ricciardi said until we address what constitutes being high behind the wheel the state is not in the position to pass the bill.

Sen. Regina Birdsell, R-Derry, said just because the public wants it does not mean it is a good policy.
She said there has been difficulty prosecuting driving while intoxicated cases involving marijuana in other states.

“There are a lot of processes that need to be set up,” she said for law enforcement. “Do we have this? I don’t know. The amendment does not say.”

Whitley said this is a racial justice issue with Black people disproportionately arrested more than white people for marijuana use.

Sen. Bob Giuda, R-Warren, said in every state where marijuana has been legalized there has been an explosion in pediatric health concerns. He said suicide, overdose and vehicular deaths have been impacted.

“This is not a harmless substance,” Giuda said.

Sen. Lou D’Allesandro, D-Manchester, spoke against the amendment and the bill. He said he spoke as a parent and grandparent and the terrible effects that marijuana can have on people.

Sen. Jeb Bradley, R-Wolfeboro, said there has been a long discussion on what is in and not in this amendment.

One of the problems he said is who is going to sell? Other states have dispensaries but there is no ability in the bill to raise revenue from the product and no quality control.

“What we are getting with this amendment is an open door to the black market,” he said.

He also compared violation limits to alcohol and noted the fines are higher for booze. And he said the deletion of language related to ownership and control of property related to marijuana was problematic.

“It is not ready for prime time,” Bradley said of the bill.

Sen. Sharon Carson, R-Londonderry, said this is a federally illegal substance and any change should begin there. She noted every state which has legalized it has done so in defiance of the federal government.

MASKS IN SCHOOLS
A bill that takes away from schools the right to require masks, House Bill 1131, passed 14-10 along party lines.

Sherman, who is a physician, argued the bill would be dangerous to public health but Sen. Sharon Carson, R-Londonderry, said masks have not been proven to be effective in that age group and have done more harm than good. She said it should be left to the parents.

“Masks have been proven to be more harmful than good,” she stated.

Kahn said this sort of mandate on local schools is wrong, particularly when there is a law to keep schools open. He said he supported local control and public health.

Bradley said there should be no penalty and was happy that was taken out of the bill. He said the Senate has gotten off track and the discussion should be about who makes the decision on mandatory masking.

Sherman said schools are a giant Petrie dish and students can pass infections back and forth.

During the pandemic, the state Department of Education recommended local control and Sherman said he agreed that should continue, allowing school boards to make their own decisions during the pandemic based on what was happening in their region.

The bill now goes on to the governor.

VOTING MEASURE
A bill modifying the definition of domicile for voting purposes passed the Senate on a 14-10 vote, despite efforts by Democrats who wanted to amend it for temporary residents and noted it may have Constitutional ramifications.

They were concerned that some of the language might inhibit participation.

House Bill 1203-FN modifies procedures and forms for voting and removes the requirement that the Secretary of State conducts a post-election voter registration inquiry.

Sen. Donna Soucy, D-Manchester, sought to divide the question and remove sections 1 and 7 of the amended bill to improve the language but that measure failed along partisan lines.

Sherman noted there are Constitutional rights that a person has to vote where they are residing, be it temporarily at their parent’s home while they look to move out of state, for example, but have moved out of their apartment in Massachusetts. It would be wrong to vote in a place where you don’t live or where you intend to live, but it is crystal clear that they could vote in New Hampshire if they temporarily live here. Absent that, it would leave a person without a Constitutional right to vote.

“You should be able to vote, that’s in our Constitution,” Sherman said. “Isn’t that our responsibility…we all agree to the concept we just need to fix that little phraseology there and I hope we can.”

Carson said she was concerned that political activists who come to New Hampshire to work in the first-in-the-nation primary, for example, could be given the right to vote in New Hampshire under such a change.

She said intent to live here after the election is important to voter integrity and said the state is “flooded” by campaign workers during primaries.

Giuda said the right to vote is a qualified right.

“I think we are trying to solve a very significant potential problem with transients,” Giuda said, adding they can vote absentee from the state that they are coming from. The bill passed.

SCHOOL BUDGET TAX CAPS
House Bill 1393 was killed; the bill would have established statewide requirements and procedures on school district budget caps. Some have expressed concern that it would remove local control but Sen. James Gray, R-Rochester, said this would be enabling legislation allowing for local control.

Soucy said she comes from a city with a tax cap. This bill’s problem is mechanical, “it just doesn’t work,” she said.

“If you support tax caps, those will continue to be in place,” she said.

LEGISLATIVE PARKING GARAGE
The Senate passed House Bill 1661, appropriating $9.3 million for preliminary work on a new legislative parking garage at the site of the Department of Justice, across the street from the Legislative Office Building in Concord. The money would be used to move and lease new space for the Justice Department in addition to other site preparation work for a new legislative parking garage. The bill passed on a voice vote and was ordered to the Senate Finance Committee for further consideration.

REMOTE PARTICIPATION
For the first time, both Senators D’Allesandro and William Gannon, R-Sandown, were able to vote remotely during the session and listened and appeared on a split screen in the chambers, but the Senate did not respond when asked why.

The Senate also took the following action
TABLED HB 1417 which would have state pay 7.5 percent of municipalities, schools and county employee retirement costs

PASSED AND SENT TO FINANCE COMMITTEE HB 1548 which fast tracks sale of Lakes Region facility and makes provisions to move the state E-911 and use some of the proceeds from that sale to pay for the relocation.

TABLED HB 1417, which would have provided $28 million to lower property taxes across the state.
Republicans said given the uncertainty of the economy that providing that relief would be unwise while Democrats said the money was necessary for property tax relief.
The prime sponsor of the bill was the late House Democratic Leader Representative Renny Cushing, D-Hampton.
After the vote, Soucy issued the following statement:
“For weeks, our Republican colleagues have touted legislative efforts, many of them spearheaded by Democrats, to provide property tax relief. Now, when we have the best proposal of the session to provide real, direct, long-term property tax relief, they refuse to move forward.”

Sen. Jeb Bradley, R-Wolfeboro, said the time was just not right to provide this relief to property taxpayers.
“Last week we passed HB 1221, a one-time $28M appropriation to pay the 7.5 percent of local contributions to the New Hampshire Retirement System for Fiscal Year 2023 and the latest step in our efforts to lower property taxes,” Bradley said.