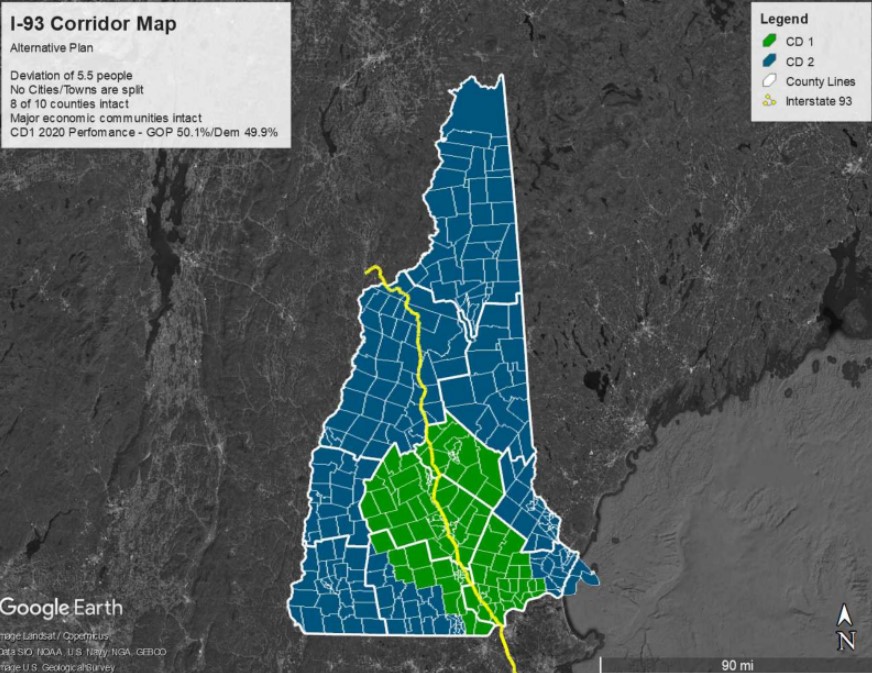 CONCORD – A proposal for a dramatic change to the state’s two congressional districts is going before the Republican-controlled House next week after members of a special committee won a fight with Democrats Wednesday, choosing a map that would change voting districts for about one-third of the state’s voters.

The 8 to 7 partisan vote comes as the clock ticks toward filing deadlines for the next election.

The House Special Committee on Redistricting, which was forced to go back to the drawing board by a governor’s promised veto on the last map, has amended Senate Bill 200 with a map that would make both Democratic incumbents U.S. Reps. Annie Kuster and Chris Pappas residents of the same district.

Rep. Ross Berry R-Manchester drew the map that was supported by the committee.

“I gave you everything you asked for,” Berry said. “I used county lines because that is how federal government distributes money.”

Bergeron asked if the change would favor the campaign of Republican Matt Mowers in District 1.

“My point of drawing this map was to best represent the state of New Hampshire,” Berry said.

Berry said there is commonality with the I-93 economic corridor.

Rep. Barbara Griffin, R-Goffstown, committee chair, said like Maine’s license plate is “vacationland” this would make one district have a primarily common interest in tourism, from the north country to the seacoast. But it would also include Nashua.

The rules do not require candidates be from the same congressional district they represent, however.

Republican advocates said the idea is to create a commonality for voters in District 1 along the economic heart of the state on both sides of Route 93.

No cities or towns would be split and eight of 10 current counties would remain intact, supporters said.

The committee dismissed the Democratic map, which would have changed only one community, moving Hampstead from one district to another.

Olivia Zink, executive director of the Coalition for Open Democracy, attended the executive session when the vote took place Wednesday morning and said this relatively new map has had no public input.

She said the map was posted on Twitter Monday and the language of the amended bill was posted Tuesday night to the committee’s website.

“We have been calling to have transparency for a year,” Zink said, as had many of those who attended 10 county public hearings on the decennial redrawing of maps, after census data in 2020.

Zink said the committee met last Friday to consider the governor’s suggested map which they did not support.

After the map was released Monday, Gov. Chris Sununu said: “The people of New Hampshire are counting on the House Special Committee on Redistricting to deliver a map that holds our incumbents accountable and keeps our districts competitive. We are still not there.”

Sununu maintained last week that he wants two competitive congressional districts and that the maps being put forward by fellow Republicans were not cutting it. He claimed that a lack of competitiveness hurts democracy and incumbent accountability.

An override of Sununu’s planned veto from the first round is not likely and the chances are growing that it will be decided by the courts, Zink said.

A special master is being put in place by the Supreme Court in the lawsuit filed by former House Speaker Terie Norelli and others.

On April 11, the state Supreme Court said it was taking over jurisdiction of the lawsuit. Oral arguments on the special master’s report and recommendation will be held before the justices on May 24.

“The congressional map they are proposing guarantees the Democrats win District 2 and District 1 is more competitive but gives a partisan advantage to Republicans,” Zink said. “I think it is very interesting because we are almost running out of time and they have had the data since August.”

She said the vote Wednesday “shows we are still at an impasse…We are close to a legislative impasse.
“The Secretary of State has filing deadlines of June 2. So we are running out of time,” for the upcoming fall election cycle, she said.