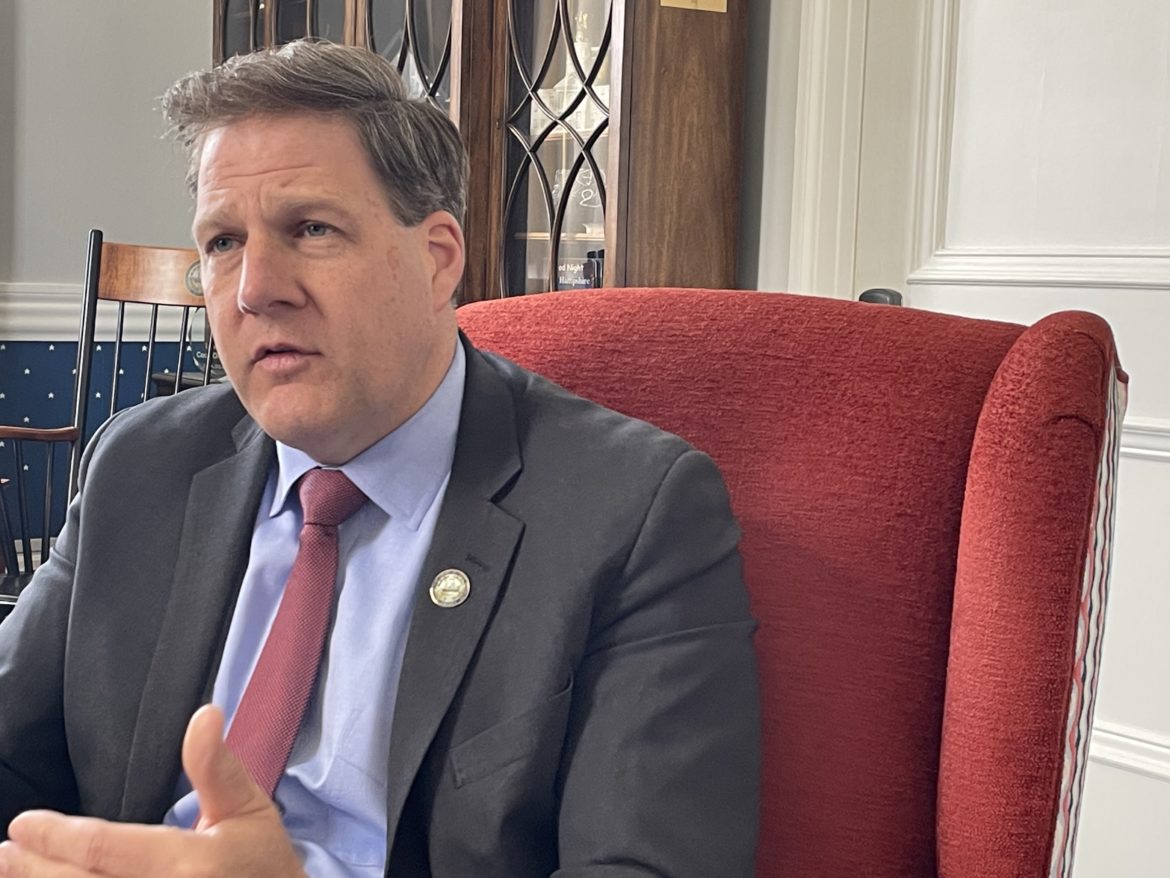 Gov. Chris Sununu is pictured in his office at the State House speaking with reporters in this file photo.

CONCORD – Gov. Chris Sununu addressed an upcoming vote related to the state’s new abortion ban, congressional map redistricting, and COVID-19 numbers, which he said are not accurate in a meeting with the media in his office Wednesday.

The governor said House Bill 1609, which the full Senate will vote on Thursday after passage in the House, is not everything he would like to see for change in the state’s new and controversial 24-week abortion ban and ultrasound mandate, which he signed into law last year. The ban took effect on January 1, 2022.

HB 1609 would add an exemption for a fatal fetal diagnosis to the 24-week abortion ban and remove the requirement that all people seeking an abortion must first have an ultrasound – at any stage of the pregnancy – is a good first step, Sununu said.

“I definitely support it. It is not all I would like to see,” he said.

Sununu said he believed in exceptions for rape and incest, which the current 24-week abortion ban does not include. Language to add those exceptions was in the original language of HB 1609 as filed in the House but it was removed in committee.

Sununu added, “I believe that we don’t criminalize doctors,” where now, health care providers who perform abortions after 24 weeks can go to jail for up to seven years. Efforts to strike the criminal penalties were also rejected in the House and Senate this year.

“I believe you need to have health exceptions for the health of the mother and all that sort of thing. And this ultrasound provision was whacky from the start,” Sununu said. “So being able to fix the ultrasound provision, everyone I think gets that, that is a good first step. So it is not everything I would want to see, but we can go back and try to get more flexibility down the road. So, good first step.”

REDISTRICTING
The governor said he does not expect that his suggested redistricting map for the state’s two congressional districts, which is required to be redrawn every 10 years, is going to have enough votes, but he maintains he will veto the Republican maps passed when they get to his desk.

He said Republicans should know that they don’t have the votes to override his veto and that a compromise is needed to get anything passed.

Currently, both congressional seats are held by Democrats.

Sununu said this is a legislative process and he won’t be over in the Legislature countering maps.

“All I tried to do is show a map that was a possibility, one of probably 100 different maps that are possible out there that would meet the criteria we are all looking for that the people of the state of New Hampshire are looking for.”

He said his map was just a place to start.

Asked if Republicans decide to wait until after the election this fall and win big, they would be able to get even more advantageous map changes, Sununu said if he was re-elected he would continue to veto bad maps.

“I would just ask the Legislature, for anyone who has that idea, to listen to the people of the state. Even Republicans in the state don’t like the map that I am vetoing,” Sununu said.

He said the maps still have to be competitive.

Without that, how would the state hold its elected representatives accountable, he asked?

“Where is the incentive and accountability on constituent services? Their need to respond to their constituents completely evaporates, potentially because they know they are getting elected again no matter what,” Sununu said.

STATE COVID-19 DATA DISCOUNTED
The governor said the data on the number of COVID-19 cases in the state is “massively inaccurate” and he chided the press for publishing data they know is inaccurate.

This week, his office of DHHS sent out information the number of new cases had increased by 31 percent in seven days.

He said the fact that the media has been reporting out data that they know is inaccurate is misleading. DHHS sends press releases daily with the numbers.

Asked, then, why the state continues to publish that information, knowing it may be wrong, the governor said the state’s hands are tied because the CDC wants certain metrics to continue to be published.

“I’ve been saying that for six months now. So the fact that you guys keep out reporting data that you know is inaccurate and then start making a metric kind of judgment there?  Are COVID cases increasing? Absolutely. Is it 31 percent? No. Of course not, because there is hundreds if not thousands of potential cases out there, that people are finding out within their homes,” and not reporting as data, he said.

“So the good news is this: we don’t see a massive crunch or burden on the health care system. People are working through a vast majority of the symptoms very well. We have resources in our health care system to address this so we feel very, very good about where we are today and we will keep watching,” he said.

He said he would be looking to the southern states. In the past they have provided early data which portend what COVID-19 may look like here in the late fall and winter.

Sununu said the state will also be looking at what is going on internationally with the virus and its variants.

Right now, he said, it looks like the Omicron 2 variant is the primary one out there and urged people to get tested.

The decision by a federal court in Florida to drop the national masks requirements on public transportation this week may increase cases but the question is whether that decision translates into more hospitalizations and deaths.

“That chance, as the data would show, is still very very low,” he said.