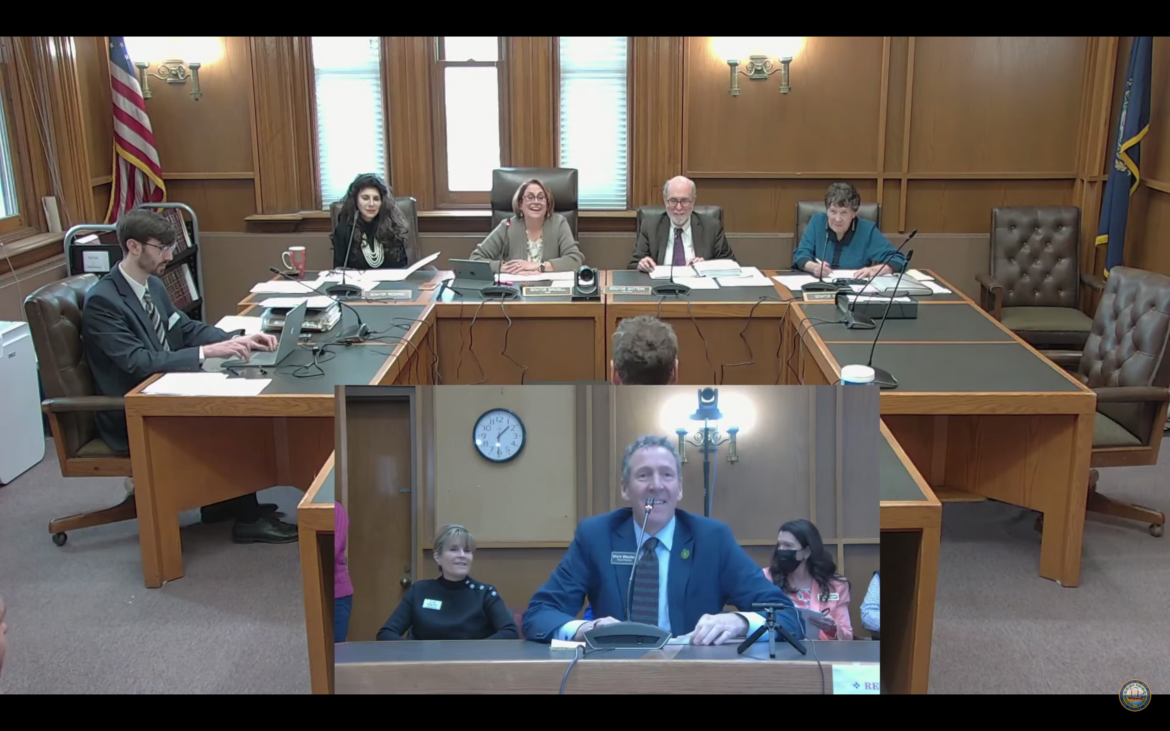 House Bill 1432 would prevent state taxpayers from having to pay for passenger rail when most of the state will not benefit from the proposed Capitol Corridor Project linking Boston to Nashua, Manchester and Concord, according to bill supporters.

But opponents said it is premature to pass any such legislation until an ongoing study of the project is finished by January 2023, when the project and its funding could be debated based on good information.

Bill sponsor, Rep. Mark Warden, R-Manchester, said the bill would block wasteful spending on the passenger rail project without action from the legislature.

“My constituents strongly support this bill,” Warden said, “and I am here to protect them from this boondoggle that will cost hundreds of millions of dollars.”
He and others said ridership on passenger rail has gone down with the pandemic and as more and more people work remotely.

And at the same time, he said, the cost of construction has skyrocketed driving the projected costs even higher.

Sen. David Watters, D-Dover, said other transportation modes are subsidized by the state such as buses and the Pease airport, and asked why he was singling out passenger rail.

The Capitol rail project is in the state’s 10-year transportation plan, which is updated every two years, Watters noted, and if they wanted to target that project why didn’t they try to remove it from the 10-year plan.

Warden said he had not tried to do that.

And Watters also said prohibiting the use of turnpike toll credits for the project may also be problematic.

Warden said he supports user fees and noted the toll credits could be used for highway projects but not for the rail project under the bill.

The state used toll credits as part of its match for federal funds to pay for the $5.3 million study currently being done on the rail project, and state transportation officials said about $2.5 million has already been spent.

They said without the toll credits the study would have to end or would have to be funded some other way, but not with state money if the bill passes.

Watters later noted the banning of state money and toll credits could also impact other passenger rail such as the Downeaster from Portland to Boston with stops in Dover and Exeter and the Vermonter which stops in Lebanon and Claremont and other smaller passenger rail systems in the state.

He suggested the bill’s intent was to create chaos.

The bill was opposed by the Manchester and Nashua chambers of commerce who said lawmakers should allow the study to be completed before deciding to cut off one potential source of funding.

Wendy Hunt, the Chief Executive Officer of the Greater Nashua Chamber of Commerce said the Nashua-Manchester area is the backbone of the state’s economy and when it grows it helps the entire state.

“This project has the potential to have a transformative impact on New Hampshire’s economy,” she said.
It is crucial to allow policy makers and the public to have the facts to consider for this economic opportunity for New Hampshire.”
Hunt said there is a misconception that all the traffic will be heading south, when the rail will bring workers into the state.

Committee chair Sen. Regina Birdsell, R-Hampstead, asked what she should say to her constituents who likely will not be using passenger rail, and Hunt said the project will bring economic growth, which will increase business taxes.

The project has the potential to go all the way to Littleton, she noted. “It would be a waste of taxpayers money not to let this study play out.”

Both Americans for Prosperity and the Josiah Bartlett Center for Public Policy supported the bill.

Chris Maidment of Americans for Prosperity said, “We support the bill for one very good reason, it prevents Granite State taxpayers from subsidizing an 18th Century transportation model.”
He said mass transportation is changing and rail is not designed to meet those needs today.

And he said the bill would keep the Department of Transportation in check and prevent it from subsidizing passenger rail through its budget or before the Joint Legislative Fiscal Committee.

“This would protect taxpayers from an end run of the fiscal committee,” Maidment said, and the project “should come through the normal legislative process.”
When Watters asked a series of questions about rail’s impact on air pollution, health and other state subsidies of transportation, Maidment did not answer the questions but said he was only there to speak to the specific bill.

He noted the latest estimates of ridership would be about eight people per trip riding the train instead of taking their vehicle to Boston, noting that would have nearly no impact on air pollution.

Cline said transportation is changing and many of the problems with congestion and pollution will be addressed with new technologies.

He noted the Massachusetts Bay Transit Authority, which would partner with the Capitol project, is running a significant deficit and that ticket sales pay for only 9 percent of the system’s costs.

“There has been a permanent decline in ridership,” Cline said. “The only question is how much lower is it going to go.”

But Rep. Laura Telerski, D-Nashua, said the bill would be a huge blow to her community which strongly supports the project.

She called the bill reactionary as it is trying to stop something before the situation is fully understood.

The detailed information will be available next year, Telerski said, but this bill would prohibit spending money on passenger rail when the cost is not know or how it will be funded.

“This does not make sense,” she said.