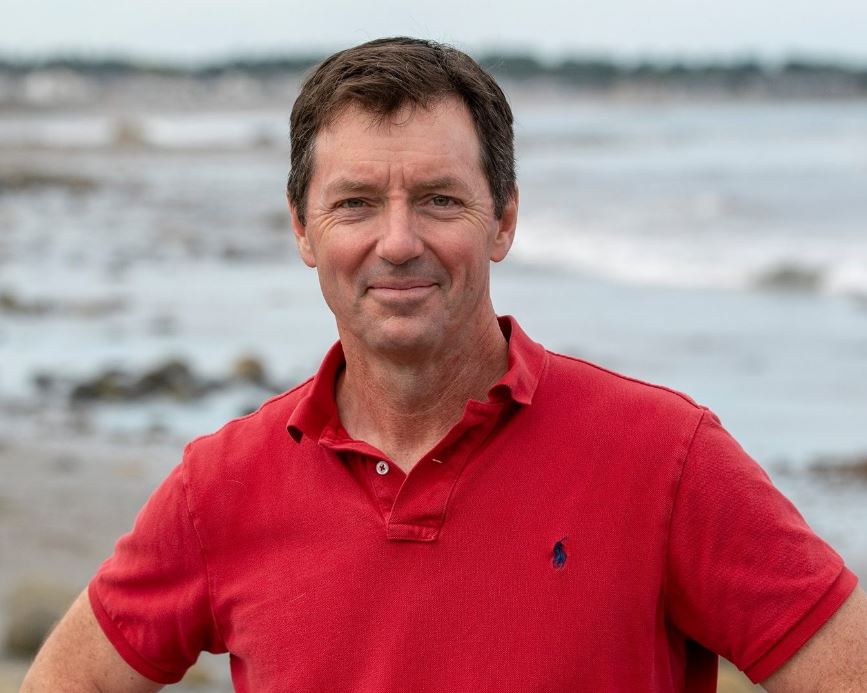 RYE – Whether it is helping one of his patients as a physician or assisting one of his Seacoast constituents with a problem, Dr. Tom Sherman said he loves to help people.

He is also Sen. Sherman, D-Rye, and said he sees his state in need of redirection and believes, as governor, he can make a huge difference in the lives of people.

From local property tax relief to dealing with the state’s lack of rental units to its mental health and opioid crises, and reversing the recent Republican-led wrongs in abortion and education, Sherman said he knows how to fix them and the current governor does not.

On Saturday, Sherman sat down with InDepthNH.org to begin to introduce himself and talk about his goals in his first-ever statewide bid for office.

He said New Hampshire deserves a leader looking out for the average person’s needs, not just the wealthiest, which he contends, Christopher T. Sununu has been caring for during his three terms in office.
The Rye Democrat announced on March 14 that he would seek the Democratic nomination for governor of the state, and he is the only one so far to throw his hat in the ring on the Democratic side.
Sununu has announced he will seek a fourth term.

The 64-year-old Sherman is touting his legislative experience in both the House and Senate – four terms in all – as key experience Sununu is lacking in the corner office that could help solve the state’s most pressing problems.

Sununu served as an Executive Councilor but had no experience as a state representative or senator.
Sherman said Sununu represents among the wealthiest families in the state and alluded to possible ambitions beyond New Hampshire, which Sununu has neither confirmed nor denied.

“I have no interest in being the President,” Sherman said.

Sununu, whose father was governor and brother was a U.S. Senator, has maintained he is interested in another two-year term and pointed thumbs down at a national Republican effort to recruit him to run against former governor and U.S. Sen. Maggie Hassan, D-NH. But those same eyes see him as a potential Presidential candidate one day for the Republicans, nationally.

To provide meaningful change in the next two years Sherman said he could work to see real estate property tax relief for both residents and small businesses, improved workforce housing development, increased child care options and he said he would work to solve the state’s mental health boarding crisis, its opioid epidemic, and reversing some of the damage caused by the Republican-led legislature in the past year, including limits on women’s reproductive rights to education funding and divisive concepts.

“The good news is that these are all solvable,” he said, but not necessarily under another two years with Sununu at the helm.

Sherman said people should not expect they will be solved if the state gives another two years to Sununu.
To effectively get the state in the right direction you have to understand and lead the legislature, Sherman said.

Working with the legislature to solve problems, he said is “something I am super comfortable with.”
He said Sununu is always waiting for the legislature to solve the problem, and either agree or disagree.
“The bill comes across his desk, he really doesn’t have much input into it and he either signs it or vetoes it. It is no surprise to me that he has the highest number of vetoes of any governor in a single session,” he said, referring to the 2019 session in which Democrats had a majority in both the House and Senate and the governor vetoed dozens.

“He didn’t engage with the legislature and that is what you have to do,” Sherman said.
“New Hampshire is not an easy place to be governor and really solve problems. It is a place where the governor has to know how to work with people and specifically how to work with the legislature so on the front end you are working to solve problems rather than waiting for someone else to do it and if you don’t like it, you veto it,” Sherman said.

CHANGE IN DIRECTION
Sherman recently retired from his medical practice and is launching an effort to get to know and introduce himself to the entire state.
“The state has about 1.3 or 1.4 million residents. I want to get to know them all. I want to listen to them and hear their hopes,” he said.

Already, Sherman has received important endorsements in his bid for governor, from fellow Democratic senators in key regions of the state, including Jay Kahn of Keene, Sue Prentiss of Lebanon, Becky Whitley of Hopkinton, and David Watters of Dover, and former State Senator Martha Fuller Clark of Portsmouth.
Sherman was born in Houston in 1957 and grew up in southern Connecticut, was a Classics major in college and then moved to medicine receiving degrees from Northwestern, Georgetown, and the University of Connecticut School of Medicine in 1987.

Together with his wife Lisa, a dermatologist, the Shermans and their three children, now ages 18, 27, and 29, moved to Rye when she was offered a position in a Seacoast area practice. They were living in Northern Virginia.

At the same time, Lisa was offered a position at NEDA, he was offered a post as a professor of medicine at the University of Virginia.
They decided to move to her offer in New Hampshire, to Rye after spending summers visiting Lisa’s sister, Anne Forsythe on the Seacoast.

He said of Rye, “I absolutely fell in love with it.”

When they moved, by design he was a part-time stay-at-home-dad for the first years, before being tapped by Exeter Hospital to lead the creation of a new gastroenterology practice.

That was more than 11 years ago. It’s called Core Gastroenterology.
Sherman said his interest in solving political problems grew over time and he left the practice of medicine a few months ago knowing he wanted to pursue being governor.

Politically, he began first as a Rye state representative from 2012 to 2016 and then beginning in December 2018 as a State Senator for District 24.

One constant in his life, he said, is helping people and he loves that. Going back to his early years as an Emergency Medical Technician, to creating a successful clinic at a homeless shelter to building a gastroenterology practice in Exeter working as a state representative, and then as a senator where he was a leader on expanded Medicaid, implementation of the Affordable Care Act to real estate tax relief, he has seen his work as making meaningful change in the lives of all.

Sherman said it became apparent to him late last summer that things were pretty static with Sununu not moving on issues important to him and said he began to feel like he could take New Hampshire in a different and more healthy direction impacting more residents by being governor.
The key thing missing in the state over the past six years of Sununu is meaningful real estate tax relief, he said.

He noted that in Sununu’s years in office, the real estate tax burden on the average person has gone up tremendously. Sununu focused on helping reduce the taxes of the most wealthy, he charged.

Sherman said he opposes a sales and income tax, never voted for one and would veto it if governor.
He said he wants to see local property tax relief and that the state is economically in a good place, “but it could be much better” and more equitable than it is today.

“If you look at property taxes they have gone up over the six years of Sununu, consistently. He’s cut taxes for large corporations, he’s cut taxes for the wealthiest people in New Hampshire, but property taxes have gone up throughout his six years except in 2019. In that budget, when we (Democrats) had the majority in the House and the Senate, we sent him a budget that would give money directly back for property tax relief. That was $40 million over two years. And he vetoed it.”

Sherman said in the final compromise budget Democrats insisted on that tax relief and Sununu relented but only that one time. Not since.

Sherman said his candidacy comes at a time when the state and its legislature is moving in the wrong direction, too far to the right socially.
He said the affordable housing crisis has just gotten worse under Sununu with the rental vacancy rate at 0.6 percent.

On top of that, he said there are 15,000 children in need of child care and not enough providers. The state has about 400 opioid deaths a year, which has remained the same. Sununu notes that other states have seen increases and that the state is doing well by that measure in not increasing those numbers, but Sherman said that is not enough.

Sherman said Sununu could have done more for the mental health system; that he did not fully implement what was passed by Democrats but was impacted by COVID-19.

“We had children in our emergency room in a mental health crisis. This is all under Sununu and he can’t run from this,” Sherman said.
Every budget in recent years there has been some level of business tax relief but not business real estate, he said.

“We have to do two things simultaneously. The first thing is we have to get the state back on track. We have to get rid of the absolutely, and I mean it, the cruel abortion ban that Sununu signed into law,” he said.

In the coming weeks and months, he said he looks forward to making the rounds from Pittsburg to Portsmouth and everywhere in between, listening to residents and what they want and see for change in the state and listening to people’s hopes for the future.

He has a website, https://drtomsherman.com/, and is developing a team to move his campaign forward this summer with the election this fall.
“I love solving problems,” he said and concluded he has the experience needed to make important changes in the lives of everyone in New Hampshire in the next two years.