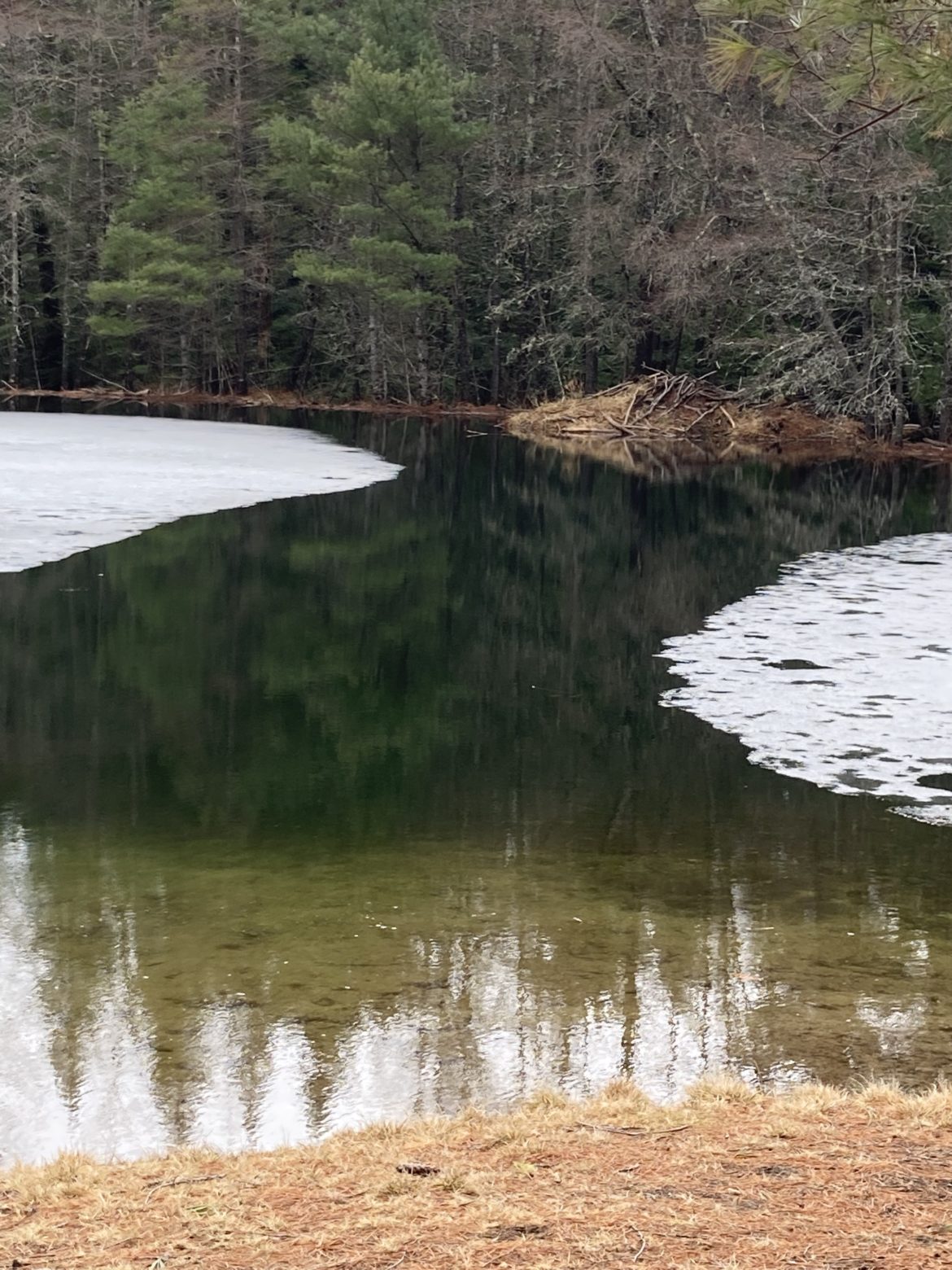 The View from Rattlesnake Ridge
By WAYNE D. KING

THORNTON – We are finally getting the first signs of spring here in the north country. Morning brings the sounds of the chickadees, the jays, and the red squirrels – preceded by the haunting sounds of the various owls that inhabit our woods.

Kodi and I wander along on our walks. Daily lately, we have been walking up to the beaver pond on Orris Road, checking to see if we have ice out yet. Expecting to see Bucky and Beatrice as I have unimaginatively named the most recent pair of beavers to inhabit the pond. The ice this year has been stubborn about melting. There is a small open water area where the main stream enters the pond but the beavers are clearly waiting until there is smoother sailing.

Kodi and I wander, stopping regularly at a shrub or a rock outcrop to pee. For him it’s about his nature, for me it’s age. The net result seems about the same, except there’s no sniffing involved on my end.

When my boy Zach was young and he wandered with Boof and me,  he would delightedly say that Boof was checking and sending his p-mail. I don’t know which of us came up with that silly idea – probably him –  but it still brings a smile to my face when I remember.

Those walks with Zach were a great bonding opportunity. Sometimes he’d ask me about government or politics but just as often we would try to identify every interesting tree or plant we came across, pick fiddleheads, or dig Indian Cucumber and wild leeks for the evening’s dinner.

It wasn’t so hard in those days to explain the behavior of one party or the other because they were well within the range of rational behavior. At risk of sounding like an old man romanticizing the past, it’s fair to say that those were sweeter times politically. Democrats and Republicans saw one another as the loyal opposition – not as the enemy or the evil empire. Today the picture is quite different.

Often I write in this space about national issues but the divisions that have affected the national body politic have bled down to the state and local levels in the past few years and this is very troubling.

Tom Robbins, in his decidedly un-PC book “Even Cowgirls Get the Blues” wrote:

“There are two kinds of crazy people. There are those whose primitive instincts, sexual and aggressive, have been misdirected, blunted, confused, or shattered at an early age by environmental and/or biological factors beyond their control. Not many of these people can completely regain that balance we call sanity, but many can to the degree that they can adjust to meet most social requirements without painful difficulty.

But there are other people, people who choose to be crazy in order to cope with what they regard as a crazy world. They have adopted craziness as a lifestyle. The only way you can get them to give up their craziness is to convince them that the world is actually sane. I have found such a conviction almost impossible to support.”

In past columns, I’ve speculated on how all this began with Newt Gingrich in 1994. Midas Newt, thinking he was spinning political gold instead spun our sweet but fragile democracy into a vile witch’s brew of antagonism and recrimination. Yet, how it happened is only instructive to us if we have the wisdom to see it when it is repeated in the future. Right now we need to find ways to overcome what is: an infection of our democracy that has festered and spread from the national to the regional to the states.

If you think that this creeping pathogen has infected only one party, disabuse yourself of the fantasy. Like any pathogen, it has threaded its way into the hearts and minds of others, particularly those who feel most aggrieved.

With very few exceptions on the state level, the elected Republicans have already taken the train to crazy town; years of gerrymandering and tampering with voting rights have created a system where citizens no longer choose their representatives but instead, legislators manipulate the electoral system and its boundaries so that they may choose their district and the citizens get what they get . . . screwed.

Among the Democrats, well, they have their own special brand of crazy too. Sensing the opportunity, the aggrieved crowd competes with one another to prove their PC credentials and tribalism replaces communitarian values.

Lest you think this is a column advocating for the mushy middle, stop right there. I’m a rtadical centrist, this is a plea for innovation, democratic values, inclusion, nuance and most of all for listening to one another.

My old friend Bob Crowley, late of Plymouth, was a dyed-in-the-wool Democrat. Back when we Democrats were a rare breed in the north country Bob had an answering machine for his home and business with a message that began “you’ve reached Bob Crowley – still proud to be a Democrat.”

Bob was a cherished mentor and just about the finest human being I have ever known. When any of our communities faced a challenge from fire and flood to human tragedy, Bob Crowley’s name was the first on our lips when we sought out help from those we could always count on. None would have ever dared to ask about politics, race, gender, sexual preference. When a fellow human being needed help, Crowley Moving and Storage was the first to show up, with Alex Ray and the Common Man family and Ray Burton right behind.

Bob gave me a piece of advice early on in my years of elected service. He had a particular disdain for certain members of his own party and he wanted to make sure that I didn’t go down that particular rabbit hole. He would describe certain individuals as the sort of person who “would do anything for the working stiff except sit down and have dinner with them.” Even then he was aware that there were those among the Democrats who would talk a good game about working folks but silo them in a place where they were easy to ignore.

The New Hampshire legislature has been captured by the voluntary crazies, the tribal, the entitled, the aggrieved. None of whom can muster a coalition that represents the best interests and will of the people of New Hampshire. In short, the lunatics have taken over the asylum.

It’s time for the people of New Hampshire to take back their government with a healthy dose of direct democracy. We can’t completely wrest the process from the crazies but we can take on the most egregious cases.  We can start with a movement for initiative petition and referendum. Allowing the people themselves to place legislative initiatives on the ballot and repeal stupid laws passed by the legislature by referendum. There is not a state in these (dis) United States that would not benefit from allowing the people to propose and dispose of some of the crazy stuff that is coming out of our state legislatures.

It may be that some swing of the pendulum will return us to a semblance of normalcy but we can’t count on that. We can, however, set a course for normalcy by moving to ranked choice voting.

In our current broken system people can be elected with far less than a majority of votes. Ranked choice permits the voter to rank the candidates in order of preference. When no candidate receives a majority the votes are tallied using the ranking system until someone achieves a majority. You can easily imagine where candidates who have conducted a campaign based on hate, mudslinging and unproven allegations would rank in a voters choices.  Ranked Choice Voting assures that a simple majority becomes the rule. It would also put the crazies on notice that if they intend to run a campaign of mudslinging and fake news they will pay with their seat because experience shows us that voters do not favor candidates who fight dirty.

Our experience with Ranked Choice Voting, where it has been employed, is that candidates who see the world as most normal folks do, with nuance and hope have a distinct advantage and the outcomes of elections are far more normalized.

While we are at it, let’s add term limits to the mix – at every level of government.

I realize that this is an about face for me. For years I was convinced that knowledge and experience were a paramount virtual when electing our representatives. I was wrong. During my elected years it was self interest, then it was self righteousness. Both were pure hubris.

Finally, the gravest danger to our democracy can be found in the demise and the siloing of news. Unfortunately, for this there are no easy answers, but we damn well better find them and soon. According to Dan Kennedy, professor at Northeastern University’s School of Journalism in Boston in the last 15 years 2100 newspapers have closed and 6,000 journalists have sought work elsewhere. Just as “food deserts” threaten the health of marginalized communities,”news deserts” are emerging threatening the fabric of our democracy, especially at the local level. It’s already a lot easier for local officials to act in a corrupt manner because there are fewer gatekeepers watching over their activities. News Deserts threaten to make such corruption far easier.

Wayne King is an author, artist, activist and recovering politician. A three-term State Senator, he was the 1994 Democratic nominee for Governor and a founder of the Electronic Community Project, working in West Africa to enhance the reach and effectiveness of the civil society community. His art (WayneDKing.com) is exhibited nationally in galleries and he has published four books of his images, most recently, “New Hampshire – a Love Story”, His novel “Sacred Trust” a vicarious, high voltage adventure to stop a private powerline is available on Amazon.com as are the photographic books. He lives in Thornton, between Rattlesnake Ridge and the Waterville Range. He proudly flies both the American and Iroquois Flags. His website is: http://bit.ly/WayneDKing