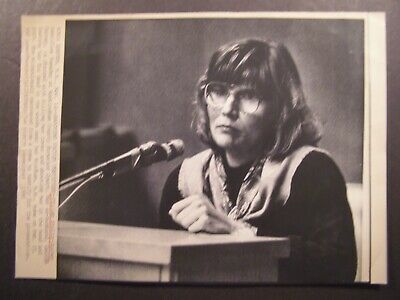 Miriam Stoltz-Gurney is pictured testifying in 1990 against her ex-husband George Gurney in this newspaper clipping that was listed for sale on eBay.

Ten months after Miriam Stoltz died and 33 years after she was shot in the head and recovered, the Attorney General’s Office says her death has been ruled a homicide.

She was known as Miriam Stoltz-Gurney when her ex-husband George Gurney was accused of the shooting death of her boyfriend, Roger Whittemore of Swampscott, Mass., in her Windham home.

Gurney then kidnapped Stoltz, drover her around, shot her in the head and left her for dead in the woods on Feb. 15, 1989, police said.

Stoltz spent one week in a coma and several months in a rehabilitation facility before naming George Gurney, an advertising salesman at the Lawrence Eagle Tribune at the time who has since died, as the man who broke into her bedroom on a jealous rampage that night wearing camouflage clothing.

“The Massachusetts Office of the Chief Medical Examiner conducted an autopsy and determined that Miriam’s cause of death was cardiovascular disease with a contributory cause of an old gunshot wound.  Her manner of death is homicide.

“Since Miriam was the main witness in the case and is dead, as is the perpetrator, the case remains closed,” Garrity said.

George Gurney was tried twice for the crimes, but neither jury could reach a verdict after hearing testimony indicating Stoltz’ head injury could make her testimony unreliable.

Gurney, who maintained his innocence, was released after serving 17 months in jail. The state decided not to re-try him after two hung juries.

Gurney had been charged with the first-degree murder of Whittemore and attempted murder and kidnapping in the attack on Miriam Stoltz, who was 48 at the time.

According to her obituary, Stoltz taught art in the Haverhill, Mass., school system. And had been a member of the Windham Garden Club, the Friends of the Windham Library and member of Triumphant Cross Lutheran Church in Salem.

On April 5, Attorney General John M. Formella and Nashua Police Chief Kevin Rourke reached out to the public seeking information about the Feb. 16, 2017, death of Luna Champagne, who was 4 months old when she died.

The news release said she was taken from her parents’ home at 79 Elm Street, Apartment #2, in Nashua to a local hospital in medical distress.  She was later transported to a hospital in Massachusetts and died on Feb. 19, 2017.

The Massachusetts Office of the Chief Medical Examiner conducted an autopsy on February 23, 2017.  But the complete autopsy report was received in 2021 in New Hampshire, which revealed that Luna’s cause of death was traumatic head injuries, and her manner of death is homicide.

Authorities asked that anyone with information about Luna’s death to call the Nashua Police Crimeline at (603) 589-1665.

Tim McGuirk, spokesman for the Executive Office of Public Safety and Security in Massachusetts, said he couldn’t speak directly to either case, but could explain the process.

McGuirk said most autopsies are completed pretty quickly. In fact, the office is required to finish 90 percent within 90 days.

The final autopsy report is a very detailed documents and in some cases require more time, McGuirk said.

In some cases, the medical examiner could be waiting for documentation that could delay the final report, he said.

Asked if a case would be expedited if it involved homicide, McGuirk said, “Not that I’m aware of.”