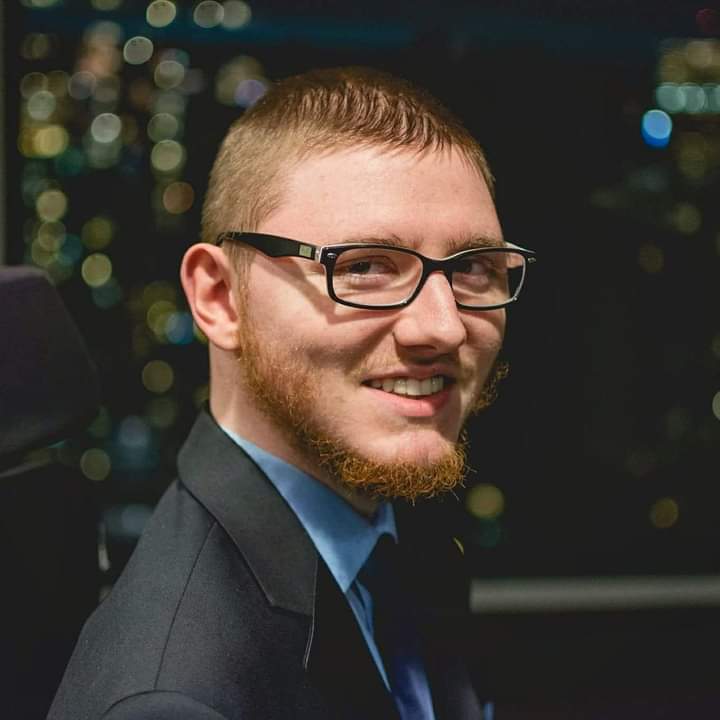 By Beverly Stoddart, A NH Life

Sam Safford and I are members of Winning Speakers Toastmasters in Windham. He is the Vice President Public Relations, where he works to promote our club. As Toastmasters, we choose a learning path and have to write and present a series of five-to-seven-minute speeches. One of the speeches Sam gave touched me deeply in its honesty and uplifting advice. Sam lives with Duchenne muscular dystrophy characterized by progressive muscle degeneration, and he has already outlived his life expectancy. I bring this to you as an example of the strength of character that lives within Sam. He fearlessly gave a speech for our group that spoke of the battles he has fought and, I must say, won through his faith. I asked Sam if I could transcribe the speech I found on Facebook and share it at Easter. He agreed. I cannot think of a more powerful and generous way for Sam to speak to you and give you hope and love.

“To begin, I want to say that you are loved, and God desires to have a personal relationship with you. I grew up in church my whole life, from when I was a baby. And I still go to church now. I recall being in a Sunday school class when I was five years old, and my grandmother was the Sunday school teacher. I learned a lot from that. I was also born with Duchenne muscular dystrophy. It is a progressive muscle-wasting disease caused by a genetic mutation. I lost my ability to walk at twelve years of age. When I was thirteen, my dad passed away, which took a really big toll on a young teenager. It put a huge strain on me because I was very close to my dad.

My brother and I were the only wheelchair users in the private Christian school I went to up until tenth grade. When I was attending, I started having doubts in middle school. I was searching for Jesus to prove his existence the whole time. I had a lot of anxiety I was dealing with. I stayed at this private school until my junior year. I didn’t begin to trust God until this year of high school. I switched schools to a public school. I became so lonely because of the switch in schools. I didn’t know anybody. I didn’t have many friends. I would even sit alone at lunch pretty much every day. So, Jesus was the only person I could turn to. I asked God if He was true and Lord, please send me someone to come talk to me. A few minutes later, I looked up, and there was a girl named Kyra who I had some things in common with, music and art. Her brother also had down syndrome. We talked and talked that time which was really encouraging to me because I felt like someone was there for me now. That was God showing Himself to me. We ended up going to prom together in my senior year, which was really fun.

This was the seed that I believe God planted in my heart back then. Finishing out high school felt great. It seemed like I had everything together. Nothing seemed wrong. Fast forward to the 2020 quarantine. I started getting an intense fear of God, or what you call scrupulosity, with the belief I had to be perfect for God, and He was angry at me. This led to depression which turned into despair. I began waking up every morning wanting to take my life. These suicidal thoughts became too much for me. It made me so angry. I couldn’t understand why this was happening to me. I turned to alcohol and marijuana to get away. I just wanted to feel good and get away from my mind. Of course, this just made me more depressed. During this period, I struggled with gay thoughts that turned into the belief that I was non-binary. For me, I believed I was a man and a woman. I believed myself to be closer to a woman, which caused me to believe I was transgender. I posted pictures of myself with makeup and wigs on Instagram. At first, I really loved all the attention and affirmations, but I became a slave to these thoughts and feelings.

I began to feel trapped because all I could think about was what my gender and sexuality were. I just couldn’t stop thinking about this. It was tough for me. All this stuff was building up inside. Deep down, I just wanted to be free. Finally, one night my mom played a radio program of a woman named Jackie Hill Perry, who formerly identified as a lesbian. The way she explained her encounter with God totally broke me. That night, I could feel the presence of the Holy Spirit in my room. The next morning, I knew I needed Jesus. I was in so much internal pain. I prayed, letting it all out and repenting of my choices, and received salvation.

Most recently, in January of 2021, I was diagnosed with a brain bacteria called Bartonella. Before that, in May of 2020, I had a hospital stay because of taking too much marijuana and alcohol together, which made me blackout. I woke up with these strange vectors on my arm which we originally thought were from the IVs. Months later, my infusion nurse noticed the vectors, and she knew it was Bartonella. Her son had the same exact illness. This illness is an opportunistic pathogen from a tick or flea bite that causes brain inflammation leading to psychiatric issues, which was the cause for all my thoughts.

Some days, this disease is pretty unbearable, I have to admit. I easily get thoughts that I truly don’t believe who I am. It can be really difficult because I can’t concentrate on things. It’s gotten better since I’ve been detoxing, taking medication and a lot of turmeric and garlic and things like that. Sometimes I beg God to heal me. But I know He’s using this in my life, so I trust Him. I know something good is going to come out of it.

I just wanted to share a scripture that makes me look forward to going to heaven. 2 Corinthians 4:7-12, “But we have these treasures in jars of clay to show that this all-surpassing power belongs to God and not to us. We are afflicted in every way but not crushed, perplexed but not driven to despair, persecuted but not forsaken, struck down but not destroyed, always carrying in the body the death of Jesus so that life of Jesus may also be manifested in our bodies. For we who live are always given over to death for Jesus’ sake so that the life of Jesus may also be manifested in our mortal flesh. So death is at work in us but life in you.” I’m going to jump down to verse 16. “So, we do not lose heart though our outer self is wasting away…”

Thank you, and God bless you.”